The Willis Tower, built and still commonly referred to as Sears Tower, is a 108-storey, 1,451-foot (442 m) skyscraper in Chicago, Illinois, United States. At completion in 1973, it surpassed the World Trade Center towers in New York to become the tallest building in the world, a title it held for nearly 25 years. The Willis Tower is the second-tallest building in the United States and the 14th-tallest in the world. Commissioned by Sears, Roebuck and Company, it was designed by chief architect Bruce Graham and structural engineers Srinivasa "Hal" Iyengar and Fazlur Khan of the firm of Skidmore, Owings & Merrill.

Designed as a headquarters for the Sears company with substantial extra space for expected expansion, the project turned out to be a financial disappointment. The structure was renamed in 2009 by the Willis Group as part of its lease on a portion of the tower's space. It has since attracted major corporate tenants and is considered an extremely desirable business location.

The building's official address is 233 South Wacker Drive, Chicago, Illinois 60606. It is a major tourist attraction, with thousands of visitors reaching its world-famous Sky-deck daily by means of special hi-tech elevators.

In 1969 Sears, Roebuck & Co. was by far the largest retailer in the world, with about 350,000 employees. Sears executives decided to consolidate their thousands of employees in offices that were sprinkled throughout Chicagoland into one building on the western edge of Chicago's Loop. With immediate space demands of three million square feet and predictions and plans for future growth necessitating even more space than that, architects for Skidmore knew that the building would be one of the largest office buildings in the world.

Sears leaders decided early on that the space they would immediately occupy should be efficiently designed to house the small army that constituted their Merchandise Group. Floor space for future growth would be rented out to smaller businesses until Sears could retake it. Therefore, the floor sizes would need to be relatively small, in order to have a higher window-space to floor-space ratio, and thus be more marketable to these prospective lessees. Smaller floor sizes necessitated a taller structure. Skidmore architects proposed a tower which would have large 55,000-square-foot floors in the lower part of the building, and would gradually taper the floor areas in a series of setbacks which would give the Sears Tower its distinctive, husky-shouldered look.

As Sears continued to offer optimistic projections for future growth, the tower's proposed height soared into the low hundreds of floors and surpassed the height of New York's unfinished World Trade Center, to become the world's tallest building. Restricted in height not by physical limitations or imagination but rather by a limit imposed by the Federal Aviation Administration to protect air traffic, the Sears Tower would be financed completely out of Sears' deep pockets, and topped with two antennae to permit local television and radio broadcasts.

The Willis Tower dominates the Chicago skyline from many angles.

Construction commenced in August 1970 after Sears and the City of Chicago approved the design. The first steel was put in place in April 1971, and the building reached its originally anticipated maximum height on May 3, 1973. When completed, the Sears Tower had overtaken the roof of the World Trade Center in New York City as the world's tallest building.

The tower has 108 stories as counted by standard methods, though the building owners count the main roof as 109 and the mechanical penthouse roof as 110. There are 101 stories if the mechanical floors are not included. The distance to the roof is 1,450 feet, seven inches, measured from the east entrance. In February 1982, two television antennas were added to the structure, increasing its total height to 1,707 feet. The western antenna was later extended to reach 1,729 feet on June 5, 2000 in order to improve the broadcasting capability of local NBC station WMAQ-TV.

The design for the Sears Tower incorporates nine steel-unit square tubes in a three-tube-by-three-tube arrangement, with each tube having the footprint of 75 feet by 75 feet. The Sears Tower was the first building for which this design was used. The design allows future growth of extra height to the tower if wanted or needed.

Twenty-eight acres of black anodized aluminum panels and approximately 16,100 bronze-tinted windows were used to form the tower's facade. At the tower's freight entrance, a pressure lock was installed to combat the "stack effect" generated by the differential in air pressure caused by cold air meeting warm air in the vast building. The lobby floor was decorated with metal tiles in a stylized design based on the bundled-tube structure. Some 2.5-million cubic feet of concrete were used during construction. The structure was completed in May 1973 and leans four inches from vertical due to its slightly asymmetrical design, placing unequal loads on its foundation.

Two-story-high, black bands appear on the tower around the 30th–32nd, 64th–65th, 88th–89th, and 106th–107th floors. These are louvers which allow ventilation for service equipment and obscure the structure's belt trusses, which Sears Roebuck did not want to be visible as on the nearby John Hancock Center. 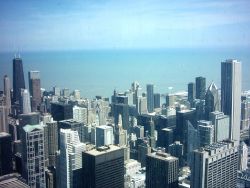 Skyline with Lake Michigan in background. 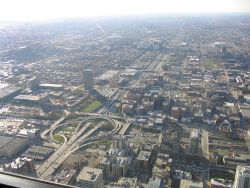 The view of downtown Chicago.

However, Sears' optimistic growth projections never came to pass. Competition from its traditional rivals (such as Montgomery Ward) continued, only to be surpassed in strength by other retailing giants like Kmart, Kohl's, and Wal-Mart. Sears & Roebuck deteriorated as market share slipped away, and management grew fearful and introverted through the 1970s (Katz 1987). The Sears Tower was not the draw Sears hoped it would be to potential lessees, and stood half-vacant for a decade, as alternative office space was built in the 1980s. Finally, Sears was forced to take out a mortgage on their headquarters building. The company began moving its offices out of the Sears Tower in 1993 and had completely moved out by 1995, moving to a new office campus in Hoffman Estates, Illinois.

There have been several owners of the tower since then. Although Sears' naming rights expired in 2003, the building continued to be named the Sears Tower for several years. In March 2009, London-based insurance broker Willis Group Holdings agreed to lease a portion of the building, and obtained the building's naming rights. On July 16, 2009, the building was officially renamed Willis Tower. Now considered one of the finest locations for business in Chicago, the Willis Tower is currently a multi-tenant office building with more than 100 companies doing business on the premises, including major law firms, insurance companies, and financial services firms. In 2012, United Airlines announced it would move its corporate headquarters from 77 West Wacker Drive to Willis Tower. In 2015, the Blackstone Group completed purchase of the tower for a reported $1.3 billion, the highest price ever paid for a U.S. property outside New York City. 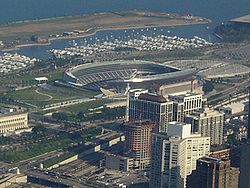 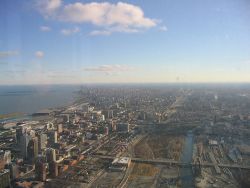 The Skydeck observation deck on the 103rd floor of the tower is 1,353 feet above ground and is a famous tourist attraction. Tourists can experience the sway of the building on a windy day. They can see far over the plains of Illinois and across Lake Michigan to Indiana, Michigan, and Wisconsin on a clear day. It only takes about 45 seconds to soar to the top in either of two special elevators.

The Skydeck competes with the John Hancock Center's observation floor across town, which is 323 feet lower. A second Skydeck on the 99th floor is used when the 103rd floor is closed. The tourist entrance can be found on the south side of the building along Jackson Boulevard. The exit is flanked by three gift shops featuring Chicagoland memorabilia.

Which is the tallest? 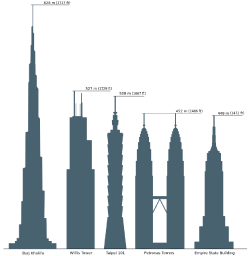 Height comparison with other tall buildings.

At 1,483-feet tall, including decorative spires, the Petronas Twin Towers in Kuala Lumpur, Malaysia, laid claim to replacing the Sears Tower as the tallest building in the world in 1998. Not everyone agreed, and in the ensuing controversy four different categories of "tallest building" were created. Of these, Petronas was the tallest in one category. But with the completion of Taipei 101 in Taiwan, the Petronas Towers were surpassed in spire height, and for the first time, the Sears was surpassed in roof height by Taipei 101. At its highest point, the Sears Tower's antenna exceeds the Taipei 101's spire in height.

Taipei 101 in Taiwan claimed the record in three of the four categories in 2004 to become recognized as the tallest building in the world. Taipei 101 surpassed the Petronas Twin Towers in spire height and the Sears Tower in roof height and highest occupied floor. The Sears Tower retained one record: its antenna exceeded Taipei 101's spire in height. In 2008, the Shanghai World Financial Center claimed the records of tallest building by roof and highest occupied floor.

On August 12, 2007, the Burj Khalifa in Dubai, United Arab Emirates was reported by its developers to have surpassed the Sears Tower in all height categories.

Upon completion, One World Trade Center in New York City surpassed Willis Tower through its structural and pinnacle heights, but not by roof, observation deck elevation or highest occupied floor. 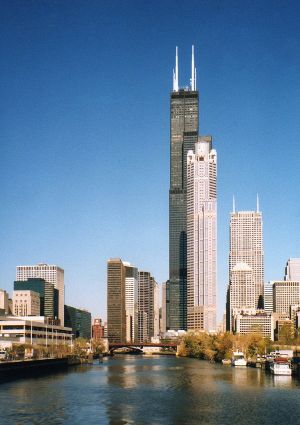