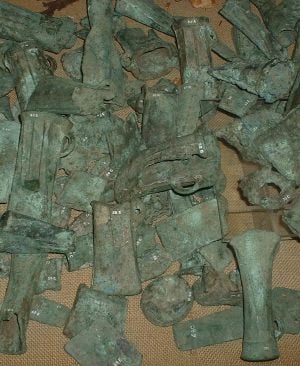 Bronze refers to a broad range of copper alloys, usually with tin as the main additive, but sometimes with other elements such as phosphorus, manganese, aluminum, or silicon. It is strong and tough and has myriad uses in industry. It was particularly significant in antiquity, giving its name to the Bronze Age.

The introduction of bronze was significant for every civilization that encountered it. Tools, weapons, armor, and various building materials like decorative tiles made of bronze were harder and more durable than their stone and copper ("Chalcolithic") predecessors. In early use, the natural impurity arsenic sometimes created a superior natural alloy called arsenical bronze.

The earliest bronzes made with tin date to the late fourth millennium B.C.E. in Susa (Iran), and some ancient sites in Luristan (Iran) and Mesopotamia (Iraq).

The ores of copper and tin are rarely found together in nature, although an ancient site in Thailand and another in Iran provide counterexamples. Consequently, serious bronze work has always involved trade. In fact, archeologists suspect that a serious disruption of the tin trade precipitated the transition to the Iron Age. In Europe, the major source for tin was Great Britain. Phoenician traders visited Great Britain to trade goods from the Mediterranean for tin. It has been suggested that the etymology of Britain is the Phoenician name Barr Tan, meaning "tin wilderness".[1]

Bronze was stronger than the era's iron. Quality steels were not widely available until thousands of years later, although they were produced in late Celtic oppida and China. But the Bronze Age gave way to the Iron Age, perhaps because the shipping of tin around the Mediterranean (or from Great Britain) became more limited during the major population migrations around 1200–1100 B.C.E., which dramatically limited supplies and raised prices.[2] Bronze was still used during the Iron Age, but the weaker iron was found to be sufficiently strong for many applications. As iron working improved, iron became both cheaper and stronger, eclipsing bronze in Europe by the early to mid-Middle Ages.

With the exception of steel, bronze is superior to iron in nearly every application. Although bronze develops a patina, it does not oxidize beyond the surface. It is considerably less brittle than iron and has a lower casting temperature.

Copper-based alloys have lower melting points than steel and are more readily produced from their constituent metals. They are generally about ten percent heavier than steel, although alloys using aluminum or silicon may be slightly less dense. Bronzes are softer and weaker than steel, bronze springs are less stiff (and so store less energy) for the same bulk. It resists corrosion (especially seawater corrosion) and metal fatigue better than steel and also conducts heat and electricity better than most steels. The cost of copper-base alloys is generally higher than that of steels but lower than that of nickel-base alloys.

Copper and its alloys have a huge variety of uses that reflect their versatile physical, mechanical, and chemical properties. Some common examples are the high electrical conductivity of pure copper, the excellent deep-drawing qualities of cartridge case brass, the low-friction properties of bearing bronze, the resonant qualities of bell bronze, and the resistance to corrosion by seawater of several bronze alloys.

In the twentieth century, silicon was introduced as the primary alloying element. It produced an alloy with wide applications in industry and the major form used in contemporary statuary. Aluminum is also used for the structural metal known as aluminum bronze.

Bronze is the most popular metal for top-quality bells and cymbals, and more recently, saxophones. It is also widely used for cast metal sculptures. Common bronze alloys often have the unusual and very desirable property of expanding slightly just before they set, thus filling in the finest details of a mold. Bronze parts are tough and typically used for bearings, clips, electrical connectors, and springs.

Bronze also has very little metal-on-metal friction, which made it invaluable for the building of cannons where iron cannonballs would otherwise stick in the barrel. It is still widely used today for springs, bearings, bushings, automobile transmission pilot bearings, and similar fittings, and is particularly common in the bearings of small electric motors. Phosphor bronze is particularly suited to precision-grade bearings and springs.

Commercial bronze (otherwise known as brass) is 90 percent copper and 10 percent zinc, and contains no tin. It is stronger than copper and it has equivalent ductility. It is used for screws and wires.

Another useful property of bronze is that it is non-sparking (unlike steel). That is, when struck against a hard surface, it will not generate sparks. This is used to advantage to make hammers, mallets, wrenches, and other durable tools to be used in explosive atmospheres or in the presence of flammable vapors.

Classification of copper and its alloys