The saxophone is a conical-bored instrument of the woodwind family, usually made of brass and played with a single-reed mouthpiece like the clarinet. It was invented by Adolphe Sax around 1840.

The saxophone is most commonly associated with popular music, big band music, jazz, and rock and roll, but it was originally intended as both an orchestral and military band instrument. Saxophone players are called saxophonists.

Unique in its origin as being invented for its particular sound, the saxophone is the result of its inventor's realization that there was no instrument that could produce a heavy reed sound with great power. He thus transformed a woodwind instrument into a more powerful woodwind device, enlarging the woodwind family and giving both composers and musicians a new musical apparatus for performance.

An ophicleide, the saxophone's precursor 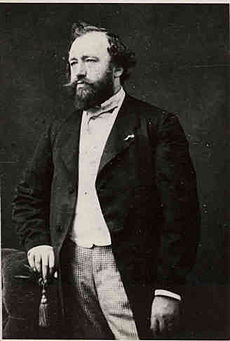 Adolphe Sax was a Belgian-born instrument-maker, flautist, and clarinetist working in Paris. He constructed saxophones in several sizes by the early 1840s, but he did not receive a patent for the instrument until June, 28 1846. The instrument was first officially revealed to the public in the presentation of his bass saxophone in C at an exhibition in Brussels in 1841. Sax also gave private showings to Parisian musicians in the early 1840s. He drew up plans for 14 different types of saxophones, but they were not all realized.

The precise inspiration for the instrument is unknown, but there is good evidence that the saxophone was created by fitting a clarinet mouthpiece to an ophicleide, a type of conical bore, brass-keyed bugle. (Sax built ophicleides, among other instruments, in the late 1830s).

Sax's intent was to invent an entirely new instrument in order to provide bands and orchestras with a bass sound to compliment the woodwind and brass sections. (Tubas began to appear around this time with a similar purpose.) Sax's instrument would be capable of a more refined performance than the ophicleide, but with enough power to be used outdoors. Sax intended to harness the finesse of the woodwind with the power of a brass instrument. For a long time, the saxophone was restricted to military bands and not used in orchestral groups, due in part to Sax's tendency to offend rival instrument manufacturers, resulting in prejudice toward the man and his instrument.

For the duration of the patent, only the Sax factory could legally manufacture or modify the instrument. However this, along with a number of other of Sax's patents, were routinely breached by his rivals. After the patent expired in 1866, various manufacturers introduced competing models and made modifications to Sax's original design.

The mouthpiece of a tenor saxophone The saxophone uses a single reed mouthpiece similar to that of a clarinet, but with a round or square evacuated inner chamber. It is considerably larger and has cork adjusting to the neck. The saxophone's body is effectively conical, giving it acoustic properties more akin to the oboe than to the clarinet. However, unlike the oboe, whose tube is a single cone, most saxophones have a distinctive curve at the bell. Straight soprano saxophones are more common than curved ones, and very few straight alto, and tenor saxophones have been made, as novelties. Straight baritone and C melody saxophones have occasionally been made as custom instruments, but were never production items. There is some debate among players as to whether the curve affects the tone or not. 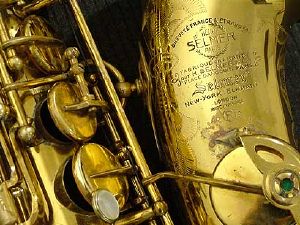 Saxophones produce different notes using a key system consisting of pads and tone holes. A saxophone has 21 to 23 keys, depending on whether it has a high F#, a high G, or a low A key. (Since 1970, the high F# key has become common among intermediate and professional level instruments, while the high G key is found on only a few modern sopranos.) When pressure is applied to a key it opens or closes one or more of the tone holes by lifting or lowering a pad. The pads, usually made of leather or an artificial material that acts as leather, cover tone holes and form an airtight seal, preventing any air from escaping. Depending on where this pad/tone hole combination is on the saxophone, it will raise or lower the pitch. Almost all woodwind instruments use the same idea to execute different notes, although the details of each instrument can differ greatly.

Members of the saxophone family 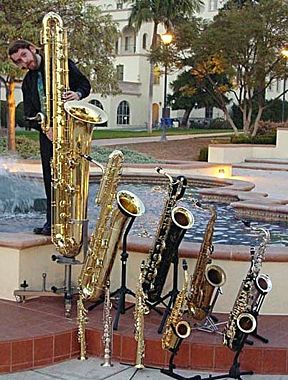 The saxophone was originally patented as two families, each consisting of seven instruments. The "orchestral" family consisted of instruments in the keys of C and F, and the "military band" family in E♭ and B♭. Each family consisted of sopranino, soprano, alto, tenor, baritone, bass and contrabass, although some of these were never made; Sax also planned—but never made—a subcontrabass (Bourdon) saxophone.

In music written since 1930, only the soprano in B♭, alto in E♭, tenor in B♭, and baritone in E♭ are in common use. These form the typical saxophone sections of concert bands, military bands, and big band jazz ensembles. The bass saxophone (in B♭) is occasionally used in band music (especially music by Percy Grainger).

The vast majority of band and big-band music calls only for E flat alto, B♭ tenor, and E♭ baritone instruments. A typical saxophone section in a concert band might consist of four to six altos, one to three tenors, and one or two baritones. A typical saxophone section in a jazz band consists of two altos, two tenors, and a baritone. Occasionally a band or jazz ensemble will perform a piece that calls for soprano saxophone. In this case it is common practice for one of the players from the alto section to switch to soprano for that piece.

Most saxophone players begin learning on the alto, branching out to tenor, soprano, or baritone after gaining competency. The alto saxophone is the most popular among classical composers and performers. Most classical saxophonists thus focus primarily on the alto. In jazz, alto and tenor are predominantly used by soloists. Many jazz saxophonists also play soprano on occasion, but most of them use it only as an auxiliary instrument.

The soprano saxophone has regained a degree of popularity over recent decades in jazz, pop, and rock contexts, beginning with the work of jazz saxophonist John Coltrane in the 1960s. A few bass, sopranino, and contrabass saxophones are still manufactured. These are mainly for collectors or novelty use, and are rarely heard; they are mostly relegated to large saxophone ensembles.

Most composers initially stayed away from composing for the saxophone due to their misunderstanding of the instrument. However, around the turn of the twentieth century, there was a renewed interest in commissioning compositions for the instrument. One prominent promoter was Elise Hall, a wealthy New England socialite who took up playing the saxophone to aid in her battles with asthma.

The saxophone eventually found additional advocates and became an important voice in orchestral works including the "Rhapsodie" by Claude Debussy, Mauice Ravel's transcription of Modeste Moussorgsky's Pictures at an Exhibition and his Bolero, several of the symphonies of Ralph Vaughan-Williams, and the works of Arthur Honegger and Darius Mihaud. Alexander Glazunov, Frank Martin, and Jacques Ibert also composed works solo saxophone and orchestra.

If classical composers were late in their advocacy of the saxophone, the instrument found great popularity in both jazz and pop music. As the jazz age evolved, the instrument became an important component of both big bands and small ensembles. In large part it was the saxophone section that gave big bands their distinctive sound. Early big band saxophonists included Jimmy Dorsey, Charlie Barnet, and Johnny Hodges of the Duke Ellington band. 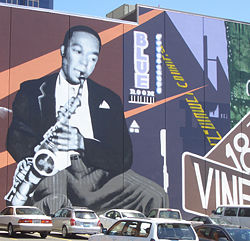 Pop music has had a love affair with the saxophone starting with the bawdy tenor sax solos found on numerous 1950s doo-wop and rock and roll tracks, featuring players such as King Curtis, noted for his playing on the Coasters' hits. Baritone sax parts were ubiquitous in the Motown years, and Junior Walker's screaming soul style was featured on hit records such as his "Shotgun" and "Roadrunner." Boots Randolph brought King Curtis' "yakety sax" style to the country genre.

The Doors' hit song "Touch Me," ends with a dynamic tenor saxophone solo by Curtis Amy, who also appeared on several of Carole King's tracks. The Beatles and Rolling Stones used saxophones on tracks such as "Got To Get You Into My Life" and "Brown Sugar."

The so-called "horn bands" of the 1960s and 1970s, such as Blood, Sweat and Tears, Chicago, and Tower of Power also relied heavily on sax and brass sections, as did Frank Zappa whose sax man, Ian Underwood was a featured soloist. In the late 70s, Tenor saxophonist Clarence Clemens became a major figure in Bruce Springsteen's E Street Band.

Playing technique for the saxophone is subjective, based upon the intended style (classical, jazz, rock, funk, and so on) and the player's idealized sound. The design of the saxophone allows for a variety of different sounds, and the "ideal" saxophone sound and keys to its production are subjects of debate. However, there is a basic underlying structure to most techniques. The fingerings for a saxophone do not change from one instrument to another. Here, notes on a treble staff correspond to fingerings below. 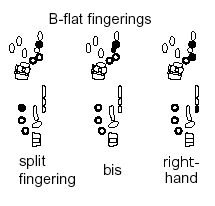 Fingerings typically appear with the left and right hand side-by-side.

In the typical embouchure, the mouthpiece is generally not taken more than halfway into the player's mouth. The lower lip is supported by the lower teeth, and makes contact with the reed. The playing-position is stabilized with firm, light pressure from the upper teeth resting on the mouthpiece (sometimes padded with a thin strip of rubber known as a "bite-pad" or "mouthpiece-patch"). The upper lip closes to create an air-tight seal. The "double embouchure" in which the upper lip is curled over the upper teeth is not commonly used in modern times, however each player may eventually develop his/her own variation of the basic embouchure style in order to accommodate their own physical structure.

Three things are imperative to a full and quick-speaking sound: appropriate air pressure which is aided by diaphragm support, correct lip/reed contact allowing the reed to vibrate optimally, and perhaps most importantly a high tongue position within the mouth. This provides focus to the player's air stream and thus to his/her sound. The player's diaphragm acts as a bellow, supplying a constant stream of air through the instrument.

A number of effects can be used to create different or interesting sounds.