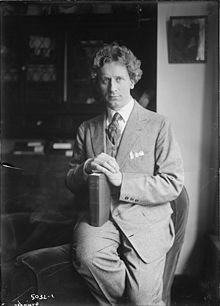 Percy Grainger (Photo from the collection of the Grainger Museum, University of Melbourne Parkville Campus)

Percy Aldridge Grainger (July 8, 1882 – February 20, 1961) was an Australian-born pianist, composer and champion of the saxophone and the Concert band. Grainger remains controversial on two accounts: firstly, Grainger was an enthusiastic sado-masochist; secondly, he was a cheerful believer in the racial superiority of blond-haired and blue-eyed northern Europeans.

This musical curiosity manifested itself in wonderfully realized arrangements of music from cultures that might not otherwise be well known. By utilizing the music of cultures other than his own, Grainger demonstrated an openness and admiration of music of "the other" and in so doing created conditions for greater understanding and respect among societies that might not easily be understood or appreciated. This musical cross-fertilization would become a hallmark of much of his professional life.

Grainger was born in Brighton, a suburb of Melbourne, Victoria, Australia. His father was an architect who emigrated from London, England, and his mother, Rose, was the daughter of hoteliers from Adelaide, South Australia, also of English immigrant stock. His father was an alcoholic. When Grainger was age 11, his parents separated after his mother contracted syphilis from his father, who then returned to London. Grainger's mother was domineering and possessive, although cultured; she recognized his musical abilities, and took him to Europe in 1895 to study at Dr. Hoch's conservatory in Frankfurt. There he displayed his talents as a musical experimenter, using irregular and unusual meters.

From 1901 to 1914 Grainger lived in London, where he befriended and was influenced by composer Edvard Grieg. Grieg had a longstanding interest in the folk songs of his native Norway, and Grainger developed a particular interest in recording the folk songs of rural England. During this period, Grainger also wrote and performed piano compositions that presaged the forthcoming popularization of the tone cluster by Leo Ornstein and Henry Cowell. 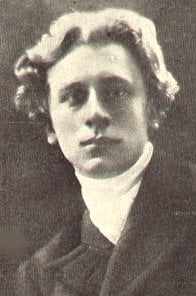 Grainger moved to the United States at the outbreak of World War I in 1914. His 1916 piano composition In a Nutshell is the first by a classical music professional in the Western tradition to require direct, non-keyed sounding of the strings—in this case, with a mallet—which would come to be known as a "string piano" technique.

When the United States entered the war in 1917, he enlisted into a United States Army band playing the oboe and soprano saxophone. He spent the duration of the war giving dozens of concerts in aid of war bonds and Liberty Loans. In 1918, he became a naturalized citizen of the United States.

Philosophically, Grainger believed that music should reflect the irregularities of the natural world, hence his music often contains asymmetrical rhythms and highly innovative harmonic progressions. Writing on this subject he stated, "The big object of the modern composer is to bring music more and more into line with the irregularities and complexities of nature and away from the straight lines and simplifications imposed by man. We should follow nature and allow ourselves very possible freedom of expression."

In spite of his highly original harmonic syntax, Grainger's music remains rooted in traditions of the eighteenth and nineteenth centuries. Writing in Musical Quarterly, Cyril Scott wrote of Grainger's unique, folk-influenced style, "Even when he keeps the folk songs within their original dimensions he has a way of dealing with them which is entirely new, yet at the same time never lacking in taste."

His piano solo Country Gardens became a smash hit, securing his reputation, although Grainger grew to detest the piece. With his newfound wealth, Grainger and his mother settled in the suburb of White Plains, New York after the war. Rose Grainger's health, however, both mental and physical, was in decline. She committed suicide in 1922 by jumping from the building where her son's manager, Antonia Sawyer, had her office.[1]. This did serve to free Grainger from an over-intimate relationship which many had incorrectly assumed to be incestuous, although his mother's memory remained dear to him for the rest of his life.

In the same year, he traveled to Denmark, his first folk-music collecting trip to Scandinavia (although he had visited Grieg there in 1906), and the orchestration of the music of the region would shape much of his finest output.

In November 1926 Grainger met the Swedish artist and poet Ella Viola Ström and, freed from his mother's domination, fell in love at first sight. Their wedding was one of the most remarkable on record. It took place August 9, 1928, on the stage of the Hollywood Bowl, following a concert before an audience of 20,000, with an orchestra of 126 musicians and an a cappella choir, which sang his new composition, To a Nordic Princess, dedicated to Ella.

In December 1929 Grainger established himself as a musical innovator with a style of orchestration or arranging that he called "elastic scoring." He outlined his concept in an essay that he called, "To Conductors, and those forming, or in charge of, Amateur Orchestras, High School, College and Music School Orchestras and Chamber-Music Bodies."

In 1932 he became dean of music at New York University and underscored his reputation as an experimenter by putting jazz on the syllabus and inviting Duke Ellington as a guest lecturer, although he found academic life difficult and soon abandoned it forever.

In 1940 the Graingers moved to Springfield, Missouri, from which base Grainger again toured to give a series of army concerts during the Second World War. However, after the war, poor health, declining ability as a pianist and the gradual decline in popularity of classical music hit his spirits hard.

In his last years, working in collaboration with Burnett Cross, Grainger invented the "free music machine," which was the forerunner of the electric synthesizer.

Grainger died in White Plains, New York, and he was buried in Adelaide, Australia. His personal files and records have been preserved at The Grainger Museum in the grounds of the University of Melbourne, the design and construction of which he oversaw. Many of his instruments and scores are located at the Grainger House in White Plains, now the headquarters of the International Percy Grainger Society.

His music aside, he remains controversial on two accounts. Firstly, Grainger was an enthusiastic sado-masochist. Secondly, he was a cheerful believer in the racial superiority of blond-haired and blue-eyed northern Europeans. This led to attempts, in his letters and musical manuscripts, to use only what he called "blue-eyed English" (akin to Anglish and the "Pure English" of Dorset poet William Barnes) which expunged all foreign (i.e. non-Germanic) influences. Thus many Grainger scores use words such as "louden," "soften," and "holding back" in place of standard Italian musical terms such as "crescendo," "diminuendo," and "meno mosso."

This racist thinking (with its concomitant overtones of xenophobia and anti-Semitism) was, however, inconsistently and eccentrically applied: he was friends with and an admirer of Duke Ellington and George Gershwin. He eagerly collected folk music tunes, forms, and instruments from around the world, from Ireland to Bali, and incorporated them into his own works.

Furthermore, alongside his love for Scandinavia was a deep distaste for German academic music theory; he almost always shunned such standard (and ubiquitous) musical structures as sonata form, calling them "German" impositions. He was ready to extend his admiration for the wild, free life of the ancient Vikings to other groups around the world which in his view shared their way of life, such as the ancient Greece of the Homeric epics.

Retrieved from https://www.newworldencyclopedia.org/p/index.php?title=Percy_Grainger&oldid=1088885
Categories:
Hidden category:
This page was last edited on 24 November 2022, at 00:35.
Content is available under Creative Commons Attribution/Share-Alike License; additional terms may apply. See Terms of Use for details.