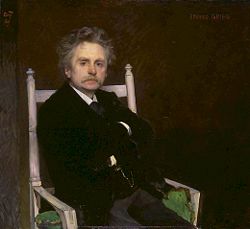 Edvard Hagerup Grieg (June 15, 1843 – September 4, 1907) was a Norwegian composer and pianist who composed in the Romantic period. He is best known for his Piano Concerto in A minor, for his incidental music to Henrik Ibsen's play Peer Gynt, and for his Lyric Pieces for the piano.

Grieg is known as a "nationalist" composer and his "nationalist" tendencies are readily apparent in a number of his best know works. He writes, "The traditional way of life of the Norwegian people, together with Norway's legends, Norway's history, and Norway's natural scenery, stamped itself on my creative impulse from my earliest years.

"Cultural history shows us that every art form with the throb of life in it has taken on a national character. Like every modern artist who has a purpose, consciously or not, I stand fast upon my native ground."

Like other "nationalist" composers, Grieg professed a deep love of his country and culture and he expressed this in his music. His legacy as Norway's most important and recognizable composer has remained unchallenged.

Grieg was born in Bergen, Norway, and was of partial Scottish descent; the original family name was spelled "Greig." After the Battle of Culloden in 1746, his great-grandfather traveled widely, settling in Norway around 1770, and establishing business interests in Bergen. Edvard was brought up in a musical home. His mother, Gesine, became his first piano teacher. He studied in many schools, and often brought in examples of his music to his class. The children were fascinated by it, but the teachers regarded it as rubbish. He was known as a lazy pupil.

In the summer of 1858, Grieg met the eminent Norwegian violinist Ole Bull, who was a friend of the family, and whose brother was married to Grieg's aunt. Bull noticed the 15-year-old boy's talent and persuaded his parents to send him to further develop his talents at the Leipzig Conservatory, then directed by Ignaz Moscheles.

Grieg enrolled in the conservatory, concentrating on the piano, and enjoyed the numerous concerts and recitals given in Leipzig. He disliked the discipline of the conservatory course of study, yet he still achieved very good grades in most areas, the exception being the organ, which was mandatory for piano students at the time. In the spring of 1860, he survived a life-threatening lung disease. The following year, he made his debut as a concert pianist, in Karlshamn, Sweden. In 1862, he finished his studies in Leipzig, and held his first concert in his hometown of Bergen, where his program included Beethoven's Piano Sonata No. 8 (Pathétique) sonata. (Grieg's own recording of his Piano Sonata, made late in his life, shows he was an excellent pianist).

In 1863, Grieg went to Copenhagen, Denmark, and stayed there for three years. He met the Danish composers J. P. E. Hartman, and Niels Gade. He also met his fellow Norwegian composer, Rikard Nordraak (composer of the 'Ja, vi elsker dette landet' or the Norwegian national anthem), who became a good friend and source of great inspiration. Nordraak died shortly after, and Grieg composed a Sørgemarsj (funeral march) over Rikard Nordraak in his honor. Grieg had close ties with the Bergen Philharmonic Orchestra (Harmonien) and was Music Director of the orchestra from 1880-1882, in music.

On June 11, 1867, Grieg married his first cousin, Nina Grieg Hagerup. The next year their only child, Alexandra, was born. The following summer, Grieg wrote his Piano Concerto in A minor while on holiday in Denmark. Edmund Neupert gave the concerto its premiere performance on April 3, 1869, in the Casino Theater in Copenhagen. Grieg himself was unable to be there due to commitments conducting in Christiania (as Oslo was then named).

In 1868, Franz Liszt, who up to that time had not met Grieg, wrote a testimonial for him to the Norwegian Ministry of Education, which led to Grieg obtaining a travel grant. The two finally met in Rome in 1870. On Grieg's first visit, the two went over Grieg's Violin Sonata No. 1, which pleased Liszt greatly. On the second visit, in April, Grieg brought with him the manuscript of his Piano Concerto, which Liszt proceeded to play by sight (including the orchestral arrangement). Liszt's rendition greatly impressed his audience, although Grieg gently pointed out to him that he played the first movement too quickly. Liszt also gave Grieg some advice on orchestration, (for example, to give the slow movement melody to a solo trumpet).

In the summer of 1869, Grieg's daughter Alexandra became ill and tragically died, at the age of 13 months.

In 1876, Grieg created incidental music for the premiere of Ibsen's play, Peer Gynt, at the request of the author. Many of the pieces from this work became very popular in the form of orchestral suites or piano and piano-duet arrangements.

In 1888, Grieg met Tchaikovsky in Leipzig. Grieg was later struck by the sadness in Tchaikovsky.

Grieg's later life brought him fame but not wealth; however, in a gesture of appreciation, the Norwegian government awarded him a pension.

Edvard Grieg died in the autumn of 1907, aged 64, after a long period of illness. The funeral drew thousands out on the streets of his hometown to honor the artist. His and his wife's ashes are entombed in a mountain crypt near his house, Troldhaugen.

Grieg is noted as a nationalist composer, drawing inspiration from Norwegian folk music. Early works include a symphony and a piano sonata. He also wrote three sonatas for violin and piano and a cello sonata. His many short pieces for piano—often built on Norwegian folk tunes and dances—led some to call him the Chopin of the north.

Among Grieg's best-known pieces are his Piano Concerto in A minor, Op. 16, ten volumes of Lyric Pieces (for piano), and his incidental music to Henrik Ibsen's play Peer Gynt, especially for Morning Mood and In the Hall of the Mountain King.

Despite In the Hall of the Mountain King being one of Grieg's most popular and enduring compositions, he himself did not care much for it. In a letter to a friend he wrote about the "infernal thing reek[ing] of cow-pies and provincialism."

Another well-known piece is his Holberg Suite (originally written for the piano but later arranged for string orchestra). His smaller scale pieces are the most successful musically. The Piano Concerto, though, retains much popularity. The slow movement, with its folk-like melodies, is perhaps its most successful feature. It was championed by pianist/composer Percy Grainger, who befriended Grieg and played the concerto frequently during his long career.

Grieg's songs now feature frequently in recitals and it is perhaps in these and the Lyric Pieces that his originality shows itself most convincingly.

Morning Mood was a favorite of Carl Stalling who often used it for morning establishing shots in Warner Bros. cartoons. It is now typically associated with Nordic scenes; however, it was meant to depict sunrise over the Sahara Desert.

In the Hall of the Mountain King was famously used in the 1931 film M, in which Peter Lorre's character, a serial killer who preys on children, whistles it. The piece has also seen extensive use in movies and commercials, usually in accordance with a dramatic and fantastic event. Famous British rock band The Who also used Grieg's music from In the Hall of the Mountain King for their song "Hall of the Mountain King" from their 1967 album The Who Sell Out. Hall of the Mountain King is also played by Finnish cello rock band Apocalyptica, on their album, Cult (2000). It also can be heard extensively on Rick Wakeman's (keyboardist with British rock group Yes) album Journey to the Centre of the Earth. The first movement of Grieg's Piano Concerto is used in Adrian Lyne's 1997 film Lolita. Another piece from Peer Gynt, Anitra's Dance, serves as background music for Quest for Glory IV. Peer Gynt also served as a basis for the theme of the Inspector Gadget animated series.

The UK theme park, Alton Towers, has used the piece, In the Hall of the Mountain King in many of their adverts over the last 15 years and is often played on speakers at the entrance to the park, on the monorail, on the skyride and is used as music in the introductory video played in the Monorail queue line. The company, ThemedMusic.com, recorded a version of the song as if it were performed by cave men to be used in the new Ug-Land area of the park in 2000.

A musical, Song of Norway, based very loosely on Grieg's life and using his music, was created in 1944, by Robert Wright and the author George Forrest, and filmed in 1970.

In the late 1990s and early 2000s, Nabisco, an American baked snacks company featured the song In The Hall Of The Mountain King on many of their commercials.