Edutainment (also educational entertainment or entertainment-education) is a form of entertainment designed to educate as well as to amuse. Edutainment typically seeks to instruct or facilitate social interaction in its audience by embedding lessons in some familiar form of entertainment: Television programs, computer and video games, films, music, websites, multimedia software, and so on. Examples might be guided nature tours that entertain while educating participants on animal life and habitats, or a video game that teaches children conflict resolution or math or reading skills.

Most often, edutainment seeks either to tutor in one or more specific subjects, or to change behavior by engendering specific sociocultural attitudes. Successful edutainment is discernible by the fact that learning becomes fun and teachers or speakers educate an audience in a manner which is both engaging and amusing. Various groups in the United States, the United Kingdom, and other countries in Africa and others, have used edutainment to address such health and social issues as substance abuse, immunization, teenage pregnancy, HIV/AIDS, and cancer.

Play, or playfulness, is an important factor in education. As Johan Huizinga (1872-1945) points out, play and joy are essential to all human activities. In the field of positive psychology, theorists such as Mihály Csíkszentmihályi argued in his Flow Theory that human beings can best perform when they are totally immersed in joyful activities. Although edutainment was often used for computer game type activities, the concept also applies to broader fields. 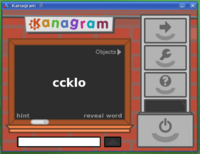 Kanagram, which is a part of the KDE Education Project, mixes up the letters of a word (creating an anagram), and users have to guess what the mixed up word is.

Word Rescue is an educational platform game released by Apogee Software in March, 1992. The game revolves around matching words with their pictures, introducing simple vocabulary such as "sit," "purple," "one," "hat," and so on, while avoiding various dangers.

The noun edutainment is a neologistic portmanteau first "invented" by Dr. Chris Daniels in 1975, to encapsulate the theme of his Millennium Project, which later became known as The Elysian World Project, which espoused the core philosophy, "Education through Entertainment." Later, this was adopted by others and in particular made popular by Bob Heyman while producing documentaries for the National Geographic Society. Edutainment is also used to refer to the use of small chunks of e-Learning used to deliver key messages in an entertaining manner. This can be used to treat such issues as ethics, diversity and compliance.

According to other sources, Peter Catalanotto first coined this phrase in the late 1990s, as he traveled around the country edutaining schoolchildren about writing and illustrating.

Prior to this period, "Edutainment" was the title of hip-hop group Boogie Down Productions' fourth album which was released in 1990, which predates Catalanotto's popularization of the word. It is also the name of a popular radio show in Knoxville TN, The Edutainment Hip Hop Show.

In 1983, the term "edutainment" was used to describe a package of software games for the Oric 1 and Spectrum Microcomputers in the UK. Dubbed "arcade edutainment" an advertisement for the package can be found in various issues of Your Computer magazine from 1983. The software package was available from Telford ITEC a government sponsored training program. The originator of the name was Chris Harvey who worked at ITEC at the time.

Education and the joy of learning

The term edutainment is relatively new, which became popular along with the developments of entertainment industries and programs in the late twentieth century, including amusement parks, television shows, and computer games.

In recent years, educational philosophy has made a shift from traditional teacher-centered instruction to a more interactive, engaging, experiential method, particularly in the U.S. John Dewey and other theorists who incorporate cognitive psychology into their theories of education pointed out the importance of initiative and excitement on the part of the child in learning and emphasized learning as a life long activity fundamental to human existence. Dewey in particular also noted the importance of problem solving skills and the need to develop creativity; he perceives that education should not be a boring or painful process. Due to Dewey's influence, education in the U.S. began to use experiential, engaging methods.

Among contemporary education theorists, Nel Noddings, in her Happiness and Education, has been critical of the current education system and argues that education should be directed toward the fundamental goal or purpose of human life, happiness.

Many theorists argue that joy and play are fundamental to human existence.

Johan Huizinga (1872-1945), a cultural historian known for The Autumn of the Middle Ages, defined human being as "homo ludens" (man the player or a being who plays) in contrast to such concepts as "homo sapience" (man the knower) or "home faber" (man the maker). In his Homo ludens; a Study of the Play-Element in Culture, Huzinga argued that play is fundamental to all cultural activities including religious activities, sports, arts, and even wars. He conceived all cultural activities as an extension or forms of play.

In the area of psychology, Mihály Csíkszentmihályi presented a theory of "Flow" and pointed out the positive role of play in learning. Flow is the mental state of operation in which the person is fully immersed in what he or she is doing by a feeling of energized focus, full involvement, and success in the process of the activity.

Roger Caillois also argued, in his Man, Play, and Games, the centrality of play in human existence.

Entertainment-Education uses a blend of core communication theories and fundamental entertainment pedagogy to guide the preparation of the programming. Additionally the CDC has a tip sheet available on its website that provides additional guidance for writers and producers: Centers for Disease Control and Prevention.

The major communication theories that influence Entertainment-Education include:

Pedagogy involved with Entertainment-Education include:

Experiential education as a form of edutainment

Educational play facilities as well as hands-on children's museums are considered to be "edutainment" where children actively play in engaging environments while learning. Some examples of edutainment facilities are: PlayWiseKids in Columbia, MD; Talents Center in Saudi Arabia; Strong National Museum of Play in Rochester, NY; and the Please Touch Museum in Philadelphia, PA. These facilities are also popular field trip destinations for pre-school and elementary school teachers.

Outdoor education or adventure education can be considered as a form of edutainment. Students are directly exposed to nature and can learn important skills, such as teamwork. Some businesses also use outdoor activities such as rock climbing as a part of employee education.

The field of Entertainment-Education (EE), combines communication and education theory with communicative arts to deliver primarily social development messages. Although Entertainment-Education has existed for millennia in the form of parables and fables, perhaps the most influential modern-day practitioner and theorist in the field is Miguel Sabido. In the 1970s, Sabido began producing telenovelas (soap operas or serial dramas) that combined communication theory with pro-health/education messages to educate audiences throughout Latin America about family planning, literacy, and other topics. His model, which incorporated the work of Albert Bandura and others theorists, as well as research to determine whether programs impacted audience behavior, revolutionized the field. Today, the principles are being used extensively in the health communication field to educate people around the world about important health issues. Initiatives in major universities, such as Johns Hopkins University and in NGOs such as PCI-Media Impact and government agencies such as the Center for Disease Control (CDC), are influencing the United States and the world.

Successful radio programs that have incorporated Entertainment-Education principles include:

There are many television programs that incorporate Entertainment-Education as well. The Sentinel Award, which is administered by the University of Southern California's Annenberg Center for Communication, the CDC and the National Cancer Institute (NCI), is given each year to programs that address health and medical issues in their storylines. 2006's nominees/winners include:

Motion pictures with educational contents appeared as early as 1943.

After World War II, edutainment shifted towards television, primary as children's television series, such as Sesame Street, Dora the Explorer, and Teletubbies.

Edutainment is also a growing paradigm within the science museum community in the United States. This approach emphasizes fun and enjoyment, often at the expense of educational content. The idea is that Americans are so used to flashy, polished entertainment venues like movie theaters and theme parks that they demand similar experiences at science centers and museums. Thus, a museum is seen as just another business competing for entertainment dollars from the public, rather than as an institution that serves the public welfare through education or historical preservation.[1]

The issue seems to lie at the distinction between the joy of learning and mere fun without any pedagogical objectives and well thought methodological considerations.