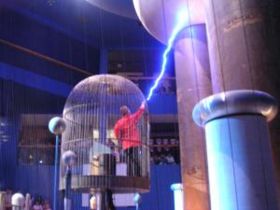 Demonstration of artificial lightning (in the Museum of Science, Boston)

A science museum or a science center is a museum devoted primarily to science. Older science museums tended to concentrate on static displays of objects related to natural history, paleontology, geology, industry and industrial machinery, and so on. Modern trends in museology have broadened the range of subject matter and introduced many interactive exhibits. Many if not most modern science museums—which increasingly refer to themselves as "science centers" or "discovery centers"—also put much weight on technology.

While art museums are designed to maximize visitors experience of aesthetics values of the works of art by observing the object, science museum is designed to draw visitors' feeling of wonder and curiosity which are the key to scientific discovery and technological innovation. Through hands on experiences or interaction with the object, visitors can see, hear, touch, and sometimes smell changes of the object. Science museum tries to give an experience to visitors what scientists and innovators have experienced. They often adopt the latest technology to maximize the excitement and joy of science.

The mission statements of science centers and modern museums vary. But all are united in being places that make science accessible and encourage the excitement of discovery. They are an integral and dynamic part of the learning environment, promoting exploration from the first "eureka" moment to today's cutting edge research.

Museum specimen of a rare fish, the Orange Roughy.

The pendulum clock at the Chicago Museum of Science and Industry in Chicago, Illinois, U.S.

Since modern science was formed in modern Europe, a history of science museum can be traced back to that period. If, however, one includes exhibits of animals, plants, insects, minerals, stones, and scientific and technological innovations, the history of science museum can probably be traced back to antiquity. The concept of museum as a cultural heritage and educational institution open to public is also a modern concept. The concept of science museum developed along with the needs of public education and the development of modern science in modernity.

As early as the Renaissance, many aristocrats collected curiosities for display to their friends. Universities and particularly medical schools also maintained study collections of specimens for their students. Such collections were the predecessors of modern natural history museums. The Utrecht University Museum, among others, still displays an extensive collection of eighteenth century animal and human "rarities" in its original setting.

The first science museum was the Museo de Ciencias Naturales, in Madrid, Spain. Opened in 1752, it almost disappeared during the Franco regime, but it recovered afterwards and today works closely with the CSIC.

Another line in the genealogy of science museums came during the Industrial Revolution, with great national exhibits intended to showcase the triumphs of both science and industry. For example, the Great Exhibition in The Crystal Palace (1851) eventually gave rise to London's Science Museum.

In America, various Natural History Societies established collections in the early 1800s, which evolved into museums. Notable was the early New England Museum of Natural History, (now the Museum of Science) which opened in Boston in 1864.

The modern interactive science museum appears to have been pioneered by Munich’s Deutsches Museum in the early 20th century. This museum had moving exhibits where visitors were encouraged to push buttons and work levers. The concept was taken to the U.S. by Julius Rosenwald, chairman of Sears, Roebuck and Company, who visited the Deutsches Museum museum with his young son in 1911. He was so-captivated by the experience that he decided to build a similar museum in home town of Chicago. Chicago's Museum of Science and Industry opened in phases between 1933 and 1940.

In the mid-twentieth century, Frank Oppenheimer included interactive science exhibits at San Francisco's Exploratorium. The Exploratorium made public the details of their own exhibits in published "Cookbooks" that served as an inspiration to other museums.

Opened in 1967, the Ontario Science Centre continued the trend of featuring interactive exhibits, instead of just static displays. Most science centers have emulated this since.

Four years after the Exploratorium opened, the first OMNIMAX theater opened as the Reuben H. Fleet Space Theater and Science Center in San Diego's Balboa Park. The tilted-dome Space Theater doubled as a planetarium. The Science Center was an Exploratorium-style museum included as a small part of the complex. This combination interactive science museum, planetarium, and OMNIMAX theater set the standard that many major science museums follow today.

As the flavor of interactivity crossed the Atlantic, the massive Cite des Sciences et de l'Industrie opened in Paris in 1986, and smaller but no less influential national centres soon followed in Spain, Finland and Denmark. In the UK, the first interactive centers also opened in 1986, on a modest scale, but the real blossoming of science centers was fueled by Lottery funding for projects to celebrate the millennium.

Many museums today include exhibits which visitors can have hands on experience. Children's museums often have this components as well as educational resources for teachers.

There are numerous science museums in varying size, scope of coverage, and primary serving communities. 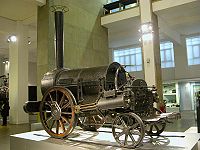 Science Museum (London) is one of the largest science museums in the world. It has about 300,000 items in almost all fields of sciences. The collection includes James Watt's steam engine, Galileo Galilei 's telescope, the first locomotive, Alexander Graham Bell's telephone, the first jet engine, and other historically important scientific discovers and technological innovations. Visitors can learn how those innovations led the modernization of society and the Industrial Revolution.

The Museum has an online guide and resources for both educators and general public. A variety of events are also held both on site and at classrooms by a dispatched team of curators.

Model of a Blue Whale in the Milstein Family Hall of Ocean Life at the American Museum of Natural History.

The American Museum of Natural History (AMNH), located in New York City, U.S., is one of the largest and most celebrated museums in the world. Located on park-like grounds, the museum comprises 25 interconnected buildings that house 46 permanent exhibition halls, research laboratories, and its renowned library. The collections contain over 32 million specimens of which only a small fraction can be displayed at any given time. The museum has a scientific staff of more than 200, and sponsors over 100 special field expeditions each year.

MIT Museum, founded in 1971, is the museum of the Massachusetts Institute of Technology, located in Cambridge, Massachusetts. It hosts collections of holography, artificial intelligence, robotics, and the history of MIT. Its holography collection of 1800 pieces is the largest in the world, though not all of it is exhibited. Currently, works of Harold Edgerton and Arthur Ganson are the two largest displays ongoing for a long time. Occasionally, there are various exhibitions, usually on the intersection of art and technology.

The official mission statement of the museum "is to document, interpret, and communicate the activities and achievements of the Massachusetts Institute of Technology, and the worldwide impact of its innovations in science and technology, to the MIT community and to society at large."

The ¡Explora! Center with its colorful dome

¡Explora! is a small size science center focusing on education in a local community setting. It is located in Albuquerque, New Mexico, United States, located near Old Town Albuquerque. Explora opened its current location in December 2003. Its name is the imperative form of the Spanish language verb explorar, which means to explore. It defines its core values in "inspirational discovery" and "joy of lifelong learning:"

Explora: creating opportunities for inspirational discovery and the joy of lifelong learning through interactive experiences in science, technology and art.[1]

The two floors contain over 250 interactive exhibits that cover a broad range of science, technology, and art. Notable exhibits include a laminar flow fountain, an experiment bar, an arts and crafts area, and a high-wire bike.

Explora also offers a variety of programs and activities. In addition to the exhibits, the building houses a performance theater, gift store, educational program areas, the in-house exhibit workshop and staff offices.

Retrieved from https://www.newworldencyclopedia.org/p/index.php?title=Science_museum&oldid=1097842
Categories:
This page was last edited on 25 January 2023, at 17:24.
Content is available under Creative Commons Attribution/Share-Alike License; additional terms may apply. See Terms of Use for details.