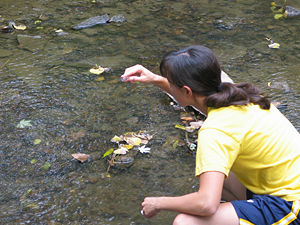 A researcher in environmental science takes samples of water.

Ecology: Ecology and environmental science are separate fields of study, but they overlap because of their multidisciplinary nature. Ecology is the study of the interrelations of living organisms, whether at the population, community, or ecosystem level, and of the relationships between organisms and their environment. Ecological studies could address endangered species, predator-prey interactions, habitat integrity, effects upon populations by environmental contaminants, or impact analysis of proposed land development upon species viability.

An interdisciplinary analysis of an ecological system that is being impacted by one or more stressors might include several related environmental science fields. For example, one might examine an estuarine setting where a proposed industrial development could impact certain species by water pollution and air pollution. In this case, biologists would describe the flora and fauna, chemists would analyze the transport of water pollutants to the marsh, physicists would calculate air pollution emissions, and geologists would assist in understanding the marsh soils and bay muds.

Environmental chemistry: It is the study of chemical alterations in the environment. Principal areas of study include soil contamination and water pollution. The topics of analysis involve chemical degradation in the environment, multi-phase transport of chemicals (for example, evaporation of a solvent-containing lake to yield solvent as an air pollutant), and chemical effects on biota.

As an example study, consider the case of a solvent that has leaked from a tank and has entered the soil upgradient of the habitat of an endangered species of amphibian. Physicists would develop a computer model to understand the extent of soil contamination and subsurface transport of solvent, chemists would analyze the molecular bonding of the solvent to the specific soil type, and biologists would study the impacts on soil arthropods, plants, and ultimately pond-dwelling copepods that the endangered amphibian feeds on.

Geosciences: They include environmental geology, environmental soil science, hydrology, physical geography, climatology, and geomorphology. They may also embrace oceanography and other related fields.

As an example study of soils erosion, calculations would be made of surface runoff by soil scientists. In addition, hydrologists would assist in examining sediment transport in overland flow, physicists would assess changes in light transmission in the receiving waters, and biologists would analyze subsequent impacts to aquatic flora and fauna from increases in water turbidity.

In the United States, the National Environmental Policy Act (NEPA) of 1969 set forth requirements for analysis of major projects in terms of specific environmental criteria. Numerous state laws have echoed these mandates, applying the principles to local actions. This precipitated an explosion of documentation and study of environmental consequences before activities involving development.

Some examples of Environmental Impact Statements prepared under NEPA are: Wastewater Treatment Expansion Options Discharging into the San Diego/Tiajuana Estuary, Expansion of the San Francisco International Airport, Development of the Houston, Metro Transportation System, Expansion of the Metropolitan Boston MBTA Transit System, and Construction of Interstate 66 Through Arlington, Virginia.

In England and Wales, the Environment Agency (EA),[3] formed in 1996, is the leading public body for protecting and improving the environment. The Agency was set up under the Environment Act 1995 as an independent body and works closely with UK Government to enforce the regulations.