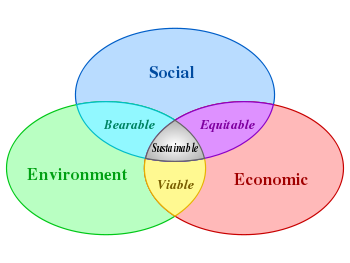 Sustainable development sits at the convergence of three factors: social, economic, and environmental.

Sustainable development is defined as balancing the protection of the natural environment with the fulfillment of human needs so that these needs can be met not only in the present, but in the indefinite future. The term has prompted a global recognition of the close linkage between environmental health and human development, as well as the need to alter social and economic policies to minimize the human impact on the planet.

First coined in 1980 by the International Union for the Conservation of Nature, "sustainable development" came into general usage following publication of the 1987 report of the Brundtland Commission. The commission’s oft-quoted definition casts sustainable development as economic and social growth that "meets the needs of the present without compromising the ability of future generations to meet their own needs" (United Nations Department of Economic and Social Affairs 1987).

The concept of sustainable development touches upon the fundamental relationship between human beings and nature. However, sustainable development is not a precisely defined term, and a wide array of views has fallen under its umbrella. Moreover, critics of the term note that it continues to participate in an anthropocentric (human-centered) viewpoint, which sees the natural environment as being in the service of human needs. They also point to its inherently capitalistic perspective: it assumes that consumption of material resources is the most important contribution to human welfare. A possible middle ground between an anthropocentric viewpoint and one that places human beings as just one of many species, with no more rights than any other species, would be to see human beings as stewards of nature in the sense of having a responsibility to love and care for nature, allowing entities to fulfill dual functions—both a function meeting the needs of the individual (such as survival, reproduction, growth) and a function benefiting the whole (contributing value to the ecosystem and to humans, including non-physical aspects like beauty, peace of mind, and so forth.)

Despite the possible conceptual and practical limitations of the term, its impact on the global conversation must also be emphasized. Sustainable development signals a shared belief that there are ultimate, biophysical limits to human growth. As established by the Brundtland Commission's definition, sustainable development is not an issue limited to national borders, but one involving the entire human community.

Origins of the term and available definitions

The Brundtland Commission, formally the World Commission on Environment and Development (WCED), is known by the name of its chair Gro Harlem Brundtland. The commission was created in 1983 to address growing concern "about the accelerating deterioration of the human environment and natural resources and the consequences of that deterioration for economic and social development." In establishing the commission, the United Nations General Assembly recognized that environmental problems were global in nature and determined that it was in the common interest of all nations to establish policies for sustainable development (United Nations Division for Sustainable Development 2005).

The Universal Declaration on Cultural Diversity (UNESCO, 2001) elaborates the concept further by stating that "...cultural diversity is as necessary for humankind as biodiversity is for nature”; it becomes “one of the roots of development understood not simply in terms of economic growth, but also as a means to achieve a more satisfactory intellectual, emotional, moral and spiritual existence." In this vision, cultural diversity is the fourth policy area of sustainable development.

Some research activities start from this definition to argue that the environment is a combination of nature and culture. The Network of Excellence "Sustainable Development in a Diverse World," which is sponsored by the European Union, works in this direction. It integrates multidisciplinary capacities and interprets cultural diversity as a key element of a new strategy for sustainable development.

The United Nations Division for Sustainable Development lists the following areas as falling within the scope of sustainable development:

Criticism of the term and alternative conceptions

Some people now consider the term "sustainable development" to be too closely linked with continued material development; they prefer to use terms like "sustainability," "sustainable prosperity," or "sustainable genuine progress" as the umbrella terms.

Many environmentalists have criticized some interpretations of the term "sustainable development" as an oxymoron, claiming that economic policies based on concepts of growth and continued depletion of resources cannot be sustainable, since that term implies that resources will remain constant.

Thus, a distinction between different degrees of sustainability should be made. The debate currently focuses on the sustainability of the environment and the economy, which can in other words be considered as a relationship between natural capital (the sum total of nature's resources) and manufactured or man-made capital.

Weak sustainability is advocated by Hartwick's Rule, which states that as long as total capital stays constant, sustainable development can be achieved. In other words, as long as the diminishing natural-capital stocks are being substituted by gains in the man-made stock, total capital will stay constant and the current level of consumption can continue. The proponents of weak sustainability believe that economic growth is beneficial, as increased levels of income lead to increased levels of environmental protectionism. This approach is also known as the substitutability paradigm.

What is being revised under the strong model of sustainable development is a definition of nature in which nature is not reduced to a passive instrument, understood only in terms of its usefulness for humans.

Despite these different perspectives, a number of common principles are embedded in most charters or action programs to achieve sustainable development, sustainability, or sustainable prosperity. These include:

Sustainability can be defined both qualitatively, as an ethical/ecological proposition such as that offered by the Bruntland definition, and quantitatively in terms of system-life expectancy and the trajectory of certain factors or terms in the system. Quantitative analysis typically uses system dynamics modeling, as systems are often non-linear. Important human ecological sub-systems that could be analyzed or modeled in this way might include the nitrogen cycle in sustainable agriculture or the depletion of oil reserves.

During the last ten years, different organizations have tried to measure and monitor proximity to what they consider sustainability by implementing sustainability metrics and indices. Some of the major attempts to define sustainable development quantitatively include:

Retrieved from https://www.newworldencyclopedia.org/p/index.php?title=Sustainable_development&oldid=1030573
Categories:
Hidden category:
This page was last edited on 13 January 2020, at 02:06.
Content is available under Creative Commons Attribution/Share-Alike License; additional terms may apply. See Terms of Use for details.