An estuary is a semi-enclosed coastal body of water where freshwater from one or more rivers or streams mixes with saltwater from the sea. Estuaries are often associated with high levels of biological diversity. They are attractive areas for fishing, boating, and tourism. In addition, they provide opportunities for scientific research and education. However, many estuaries are under threat from overfishing and activities that lead to pollution.

The term estuary can be traced to the Latin word aestuarium, derived from aestus, which means "tide" or "boiling (of the sea)."[1]

The names of estuaries vary. Examples include bay (as in Chesapeake Bay), sound (as in Puget Sound), or inlet (as in Cook Inlet). These terms are not mutually exclusive. Estuary of the River Exe. 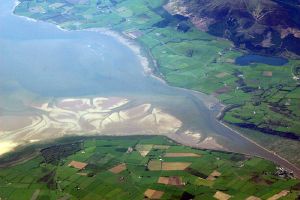 Estuary of the River Nith. 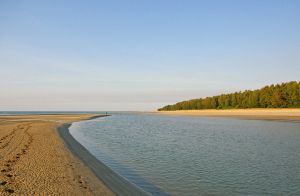 Mouth of an estuary located in Darwin, Northern Territory, Australia. 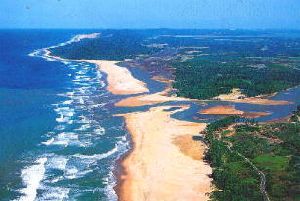 Mouth of an estuary. 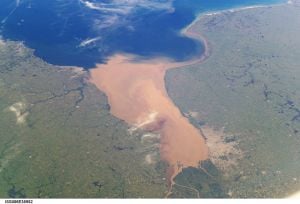 An estuary is typically the tidal mouth of a river and is made up of brackish water. Freshwater from the river is prevented from flowing directly into the open sea by one or more land formations, such as peninsulas and barrier islands. Thus an estuary forms a transition zone between freshwater and saltwater.

Estuaries are often characterized by sedimentation or silt carried in from terrestrial runoff and, frequently, from offshore. The pH, salinity, and water levels of estuaries vary, depending on the river that feeds the estuary and the ocean from which it derives its salinity (oceans and seas have different salinity levels).

Estuaries are more likely to occur on submerged coasts, where the sea level has risen in relation to the land. This process floods valleys to form rias and fjords. These can become estuaries if there is a stream or river flowing into them.

Large estuaries, like Chesapeake Bay and the Gulf of St. Lawrence, often have many streams flowing into them and can have complex shapes. Where an enormous volume of river water enters the sea (as, for example, from the Amazon into the South Atlantic), its estuary could be thought of as extending well beyond the coast.

The flow of water within estuaries may be described in two ways:

These two terms, however, have a broader oceanographic application that extends beyond estuaries proper. For example, they are used when describing the circulation of water in nearly closed ocean basins.

The time it takes an estuary to go through a complete cycle is called its flushing time.[2]

Estuaries can be grouped based on the circulation of water within them.

Estuaries may also be grouped based on their structure rather than circulation.

An estuary retains many nutrients derived from both land and sea, and it protects water quality. It thus forms an ecosystem that is filled with a rich variety of living organisms. For this reason, estuaries are an abundant source of food and human settlements are built around them. These locations often thrive with business and recreational activities, particularly connected to fishing, boating, and tourism. In addition, estuaries are important for research and educational activities.

Of the 32 largest cities in the world, 22 are located on estuaries.[4] For example, New York is located at the mouth of the Hudson River estuary.[5]

As ecosystems, estuaries are under threat from human activities such as pollution and overfishing. Estuaries are impacted by events far upstream, and concentrate materials such as pollutants and sediments.[6] Land run-off and industrial, agricultural, and domestic waste enter rivers and are discharged into estuaries. Contaminants can be introduced which do not disintegrate rapidly in the marine environment, such as plastics, pesticides, furans, dioxins, phenols and heavy metals.

Such toxins can accumulate in the tissues of many species of aquatic life in a process called bioaccumulation. They also accumulate in benthic environments, such as estuaries and bay muds: a geological record of human activities of the last century.

For example, Chinese and Russian industrial pollution, such as phenols and heavy metals, in the Amur River have devastated fish stocks and damaged its estuary soil.[7]

Estuaries tend to be naturally eutrophic because land runoff discharges nutrients into estuaries. With human activities, land run-off also now includes the many chemicals used as fertilizers in agriculture as well as waste from livestock and humans. Excess oxygen depleting chemicals in the water can lead to hypoxia and the creation of dead zones.[8] It can result in reductions in water quality, fish, and other animal populations.

An additional problem is overfishing. Chesapeake Bay, North America's second largest estuary, once had a flourishing oyster population that has been almost wiped out by overfishing. Historically, the oysters filtered the estuary's entire water volume of excess nutrients every three or four days. Today, that process takes almost a year,[9] and sediment, nutrients, and algae can cause problems in local waters. Oysters filter these pollutants, and either eat them or shape them into small packets that are deposited on the bottom where they are harmless.

Retrieved from https://www.newworldencyclopedia.org/p/index.php?title=Estuary&oldid=1066249
Categories:
Hidden category:
This page was last edited on 19 March 2022, at 00:35.
Content is available under Creative Commons Attribution/Share-Alike License; additional terms may apply. See Terms of Use for details.