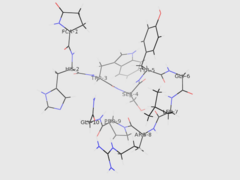 Gonadotropin-releasing hormone (GnRH) stimulates the synthesis and secretion of the follicle-stimulating hormone (FSH) and luteinizing hormone (LH), leading to ovulation

Oestrus also is the biological genus name of the gadfly.

There are many variations among animals in terms of their estrous cycles. Some may undergo estrous only one time a year during a particular season (white-tailed deer, foxes), while others may undergo a succession of cycles during a certain time of the year if they do not become pregnant (horses, sheep), and others may undergo cycles throughout the whole year (mice, cows, pigs). Some may be "induced ovulators," with cyclic receptivity but requiring mating in order to ovulate and undergo the luteal phase (rabbits, ferrets), and some require specific stimuli such as physical contact to even come into behavioral estrus (certain moles).

As experienced by most mammals, the estrous cycle allows the animals to place most of their mating energy into particular periods, and generally it is obvious to the males when females are in estrous. In some cases, estrus is limited to times that will allow birth when there are optimal environmental conditions for survival of the young, such as white-tailed deer mating in the autumn and giving birth in the spring. In contrast, the unique reproductive cycle of human beings, allowing sexual activity at any time and without overt external signs to signal estrual receptivity, fosters bonding between the male and female of a pair on the basis of sexual intimacy and love and facilitates overall social interactions in culture.

Mammals share the same reproductive system, including the regulatory hypothalamic system that releases gonadotropin releasing hormone (GnRH) in pulses, the pituitary that secretes follicle stimulating hormone (FSH) and luteinizing hormone (LH), and the ovary itself that releases sex hormones, including estrogens and progesterone. However, species vary significantly in the detailed functioning.

The estrous cycle comprises the recurring physiologic changes that are induced by reproductive hormones in most mammalian placental females. They typically have a period in which the female is sexually receptive and fertile, known as estrus (adjective is estrous), and a period in which the female is not sexually receptive and fertile. Estrous cycles start after puberty in sexually mature females and typically continue until death. The estrus phase is also referred to as being "in heat."

While most female placental mammals (dogs, cats, elephants, New World monkeys, and so on) under an estrous cycle, humans and the great apes (chimpanzees, gorillas, and orangutans) experience a true menstrual cycle. One difference is that animals that have estrous cycles reabsorb the endometrium if conception does not occur during that cycle. Animals that have menstrual cycles shed the endometrium instead. The term menstruation refers to the periodic discharge of blood and cells from the lining of a non-pregnant uterus. (Some animals that undergo estrus, such as domestic cats and dogs, do produce a very short and mild flow of blood. However, due to its small amount, and personal cleanliness in cats, it passes largely unnoticed by pet owners.)

Another difference is sexual activity. In species with estrous cycles, females are generally only sexually active during the estrus phase of their cycle. In contrast, females of species with menstrual cycles can be sexually active at any time in their cycle, even when they are not about to ovulate. This facilitates the formation of pair bonds. Note that humans also, unlike all other species, do not have any obvious external signs to signal estrual receptivity at ovulation (concealed ovulation). This combined with sexual activity not being restricted to a particular time fosters receptivity to sexual intimacy at any time, thus promoting pair bonding and allowing sex, considered by many religious traditions as ideally a holy act, to encourage and cement the bonds of love between husband and wife.

The term estrous cycle or oestrous cycle is derived from Latin oestrus (frenzy, gadfly) and originally from Greek οἶστρος (gadfly, breeze, sting, mad impulse). Short (1994) notes that the term has a rather unusual origin in that the Greek word means gadfly or warble fly, which are insects that are parasitic on cattle. Short speculates that one possible origin for the use of the term for the estrous cycle is that it was observed that the cattle sometimes reacted to these flies in ways reflective of "coming into heat," by being hyperactive, frequently bellowing, and charging, and so forth (Short 1984).

Perhaps more specifically, the Greek term refers to the gadfly that Hera sent to torment Io, who had been won in her heifer form by Zeus. Euripides used "oestrus" to indicate "frenzy", and to describe madness. Homer uses the word to describe panic of the suitors in Odyssey book 22. Plato also uses it to refer to an irrational drive (Plato, Laws, 854b) and to describe the soul "driven and drawn by the gadfly of desire" (Plato, The Republic). Somewhat more closely aligned to current meaning and usage of "estrus," Herodotus (Histories ch.93.1) uses oistros to describe the desire of fish to spawn.

In British English, the spelling is oestrus or œstrus. In all English spellings, it has a "-us" ending when used as a noun and an "-ous" spelling when used as an adjective. Thus (in American English) a mammal may be described as "in estrus" when it is in that particular part of the estrous or menstrual cycle. Estrum is sometimes used as a synonym for estrus.

Phases of the estrous cycle

The following are five periods used to describe the estrous cycle, as developed by Walter Heape. However, while this terminology is helpful in describing the cyclic events in laboratory rodents, Short (1984) maintains that it is not particularly useful for describing events in larger domestic animals.

Cycle variability differs among species, but typically cycles are more frequent in smaller animals. Even within species significant variability can be observed, thus cats may undergo an estrous cycle of 3 to 7 weeks. Domestication can affect estrous cycles due to changes in the environment. The following is a classification scheme based on the number of cycles per year.

Mammals also can be classified according to whether ovulation occurs spontaneously or not.

Cats. The female cat in heat has an estrus of 14 to 21 days and is an induced ovulator. Without copulation, she may enter interestrus before reentering estrus. With copulation and in the absence of pregnancy, cycles occur about every three weeks. Cats are polyestrous but experience a seasonal anestrus in autumn and late winter.

Dogs. A female dog is diestrous and goes into heat typically twice every year, although some breeds typically have one or three cycles a year. The proestrus is relatively long at 5-7 days, while the estrus may last 4-13 days. With a diestrus of 7-10 days, a typical cycle lasts about 3 weeks followed by about 150 days of anestrus. They bleed during this time, which will usually last from 7 to 13 days, depending on the size and maturity of the dog.

Horses. A mare may be 4 to 10 days in heat and about 14 days in diestrus. Thus a cycle may be short, such as 3 weeks. Horses mate in spring and summer, autumn is a transition time, and anestrus rules the winter.

A feature of the fertility cycle of horses and other large herd animals is that it is usually affected by the seasons. The number of hours daily that light enters the eye of the animal affects the brain, which governs the release of certain precursors and hormones. When daylight hours are few, these animals "shut down," become anestrous, and do not become fertile. As the days grow longer, the longer periods of daylight cause the hormones that activate the breeding cycle to be released. As it happens, this has a sort of utility for these animals in that, given a gestation period of about eleven months, it prevents them from having young when the cold of winter would make their survival risky.

Rats. Rats typically have rapid cycle times of 4 to 5 days. Although they ovulate spontaneously, they do not develop a fully functioning corpus luteum unless they receive coital stimulation. Fertile mating leads to pregnancy in this way, but infertile mating leads to a state of pseudopregnancy that lasts about 10 days. Mice and hamsters have similar behavior (McCracken et al. 1999). The events of the cycle are strongly influenced by lighting periodicity (Freeman 1994).

A set of follicles start to develop near the end of proestrus and grow at a nearly constant rate until the beginning of the subsequent estrus when the growth rates accelerate eightfold. They then ovulate about 109 hours after starting growth. Oestrogen peaks at about 11 am on the day of proestrus. Between then and midnight there is a surge in progesterone, LH and FSH, and ovulation occurs at about 4 am on the next, estrus day. The following day, metestrus, is called early diestrus or diestrus I by some authors. During this day, the corpora lutea grow to a maximal volume, achieved within 24 hours of ovulation. They remain at that size for 3 days, halve in size before the metestrus of the next cycle and then shrink abruptly before estrus of the cycle after that. Thus the ovaries of cycling rats contain three different sets of corpora lutea at different phases of development (Yoshingaga 1973).

Estrus frequencies of some other mammals:

Retrieved from https://www.newworldencyclopedia.org/p/index.php?title=Estrous_cycle&oldid=1006325
Categories:
Hidden category:
This page was last edited on 15 August 2017, at 15:30.
Content is available under Creative Commons Attribution/Share-Alike License; additional terms may apply. See Terms of Use for details.