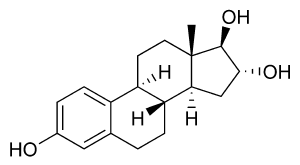 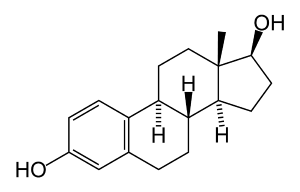 Estradiol. Note one hydroxyl group in D ring. The 'di' refers both to this hydroxyl and the one on the A ring (leftmost).

Estrogens (also oestrogens) are a group of steroid (type of lipid) compounds that function as the primary female sex hormone. Estrogens are named for their importance in the estrous cycle. The estrous cycle (also oestrous cycle) refers to the recurring physiologic changes that are induced by reproductive hormones in most mammalian placental females; humans and some primates, bats, and shrews are the only mammals who undergo a menstrual cycle instead. Estrogens are important in both those mammals undergoing an estrous cycle and those undergoing a menstrual cycle.

In humans, while estrogens are present in both men and women, they are usually present at significantly higher levels in women of reproductive age. They promote the development of female secondary sex characteristics, such as breasts, and are also involved in the thickening of the endometrium and other aspects of regulating the menstrual cycle. Follicle stimulating hormone (FSH) and luteinizing hormone (LH) regulate the production of estrogen in ovulating women. Since estrogen circulating in the blood can feedback to reduce circulating levels of FSH and LH, some oral contraceptives contain estrogens to prevent ovulation.

Part of the endocrine system, estrogen production and function reveals the complexity and harmony of the body. Produced in one part of the body, estrogen travels to other parts and binds to specific receptors in order to function. There is concern that some synthetic environmental chemicals, such as found in agricultural and home chemicals (insecticides, herbicides, fungicides, etc.) and industrial chemicals (detergents, resins) may interfere with this complex coordination and hormonal messenger system. There is likewise concern about unintended consequences of synthetic estrogens used to mimic estrogen. For example, between 1938 and 1971 in the United States, a synthetic estrogen, diethylstilbestrol, was prescribed to women to prevent miscarriages, but was later correlated with the development of cancers in the offspring and the women themselves (Schrager and Potter 2004).

The three major naturally occurring estrogens in women are estradiol, estriol, and estrone. From menarche (woman's first menstrual period) to menopause (the cessation of menstrual periods), the primary estrogen is estradiol 17beta. In the body, these types of estrogens are mainly produced from androgens, which are produced in the adrenal glands, and then converted to estrogen componds through enzyme action. Estradiol is produced from testosterone and estrone from androstenedione. Estrone is weaker than estradiol, and in post-menopausal women, more estrone is present than estradiol.

In human females, estrogen is produced primarily by developing follicles in the ovaries, the corpus luteum, and the placenta during pregnancy. Some estrogens are also produced in smaller amounts by other tissues such as the liver, adrenal glands, and the breasts. These secondary sources of estrogen are especially important in post-menopausal women. Synthesis of oestrogenes starts in theca interna cells in the ovary, by the synthesis of androstenedione from cholesterol. Androstenedione is a substance of moderate androgenic activity. This compound crosses the basal membrane into the surrounding granulosa cells, where it is converted to estrone or estradiol, either immediately or through testosterone.

Dehydroepiandrosterone (DHEA) is an abundant sex steroid in women and like other steroids is efficiently sulfated. DHEA is a precursor steroid that can be converted to estrogens (estradiol) and androgens, such as testosterone and dihydrotestosterone (5α-dihydrotestosterone), and it has been known to have a large effect on increasing female sexual desire. Estrogens can also be produced by the enzyme aromatase, which converts androgens such as DHEA to estrogens, mainly estradiol and estrone.

In human males, estrogen is produce in the testicles and is found in the sperm. Too much estrogen in males can inhibit the growth of the testes and production of sperm (Douglas et al. 1996).

Estrogen serves several purposes and has many different functions, which are touched upon below.

There are four main structural functions of estrogen. First, it stimulates endometrial growth during the menstrual cycle. Second, it is responsible for the maintenance of blood vessels and the skin. Third, estrogen reduces bone resorption, therefore increasing bone formation. This function of estrogen affects post-menopausal women greatly since a lack of estrogen is associated with osteoporosis (a disease of the bone). Last, estrogen increases uterine growth.

Coagulation, when referring to blood, is its ability to form a clot(s). Estrogen increases the circulating level of factors 2, 7, 9, 10, anti-thrombin III, and plasminogen. These chemical factors play a role in the coagulation cascade and are necessary for blood clotting. Estrogen also increases platelet adhesiveness.

Salt and water retention are caused by estrogen.

Reduced bowel motility and increased levels of cholesterol in bile are consequences of estrogen.

A range of synthetic and natural substances have been identified that possess estrogenic activity. These include bisphenol-A, phthalate esters, and nonylphenol.

Estrogen replacement therapy has proven to be a very useful method of treating osteoporosis in postmenopausal women, as well as the symptoms of menopause, such as hot flushes, vaginal dryness, urinary stress incontinence, chilly sensations, dizziness, fatigue, irritability, and sweating. Fractures of the spine, wrist, and hips decrease by 50-70 percent and spinal bone density increases by around five percent in those women treated with estrogen within three years of the onset of menopause and for 5-10 years thereafter. Standard therapy is 0.625 mg/day of conjugated estrogens (such as is in Premarin), but the dose can range from 0.3 mg/day to 1.25 mg/day. Estrogen replacement therapy also has favorable effects on serum cholesterol levels and is claimed to dramatically reduce the incidence of cardiovascular disease.

Other uses include therapy involving vaginal atrophy, hypoestrogenism (as a result of hypogonadism, castration, or primary ovarian failure), amenorrhea, dysmenorrhea, and oligomenorrhea. Estrogens can also be used to suppress lactation after child birth.

The labeling of estrogen-only products in the United States includes a black box warning that unopposed estrogen (without progestin) therapy increases the risk of endometrial cancer.