Estonian literature refers to literature written in the Estonian language (c. 1,100,000 speakers). The domination of Estonia after the Northern Crusades, from the thirteenth century to 1918 by Germany, Sweden, and Russia resulted few early written literary works in Estonian language. The oldest records of written Estonian date from the thirteenth century. Originates Livoniae in Chronicle of Henry of Livonia contains Estonian place names, words and fragments of sentences. The Liber Census Daniae (1241) contains Estonian place and family names.[1] The earliest extant samples of connected Estonian are the so-called Kullamaa prayers dating from 1524 and 1528. [2] The first known printed book is a bilingual German-Estonian translation of the Lutheran catechism by S.Wanradt and J. Koell(1535). For the use of priests an Estonian grammar was printed in German in 1637.[3] The New Testament was translated into southern Estonian in 1686 (northern Estonian, 1715). Based on northern Estonian the two dialects were united by Anton Thor Helle. Writings in Estonian became more significant in the nineteenth century during the Estophile Enlightenment Period (1750-1840).

The cultural stratum of Estonian, was originally characterized by a largely lyrical form of folk poetry based on syllabic quantity. Apart from a few remarkable exceptions, this archaic form has not been much employed in later times. The most outstanding achievements in this field are the national epic Kalevipoeg (Son of Kalev), written by Friedrich Reinhold Kreutzwald (1803-1882); Gustav Suits's ballad Lapse sünd (Birth of a Child); Villem Grünthal-Ridala's (1885-1942) poem Toomas ja Mai (Toomas and Mai) and three poems by August Annist (1899-1972). At a professional level, traditional folk song reached its new heyday during the last quarter of the twentieth century, primarily thanks to the work of composer Veljo Tormis.

In modern times Jaan Kross[4] and Jaan Kaplinski[5] are Estonia's best known and most translated writers.

As opposed to the recentness of written literature, the collections of Estonian folklore tell of the ancient pre Northern Crusades period of independence. The first fragmentary records of Estonian folk poetry dating from the thirteenth century can be found in the Chronicle of Henry of Livonia; in the late eighteenth century Johann Gottfried von Herder published examples of Estonian folk songs in his anthology Volkslieder (1807). Jakob Hurt (1839–1907) was the first to start systematically collecting Estonian folklore in the second half of the nineteenth century. Hurt coined the phrase which to this day shapes the mentality of the nation of one million people: "If we cannot be great in number, then we must be great in spirit."

Chronicles and theatrical performances by the Baltic German nobility formed the basis for local Baltic German literature which, despite the barriers of status and language, had an impact on Estonian literature. The earliest example of Estonian language poetry dates back to 1637, a poem written by Reiner Brockmann (1609–1647), teacher of Greek at the Tallinn Gymnasium. Otto Wilhelm Masing (1763–1832) was the first literati who had a thorough mastery of the Estonian language.[1]

Cannot the tongue of this land
In the fire of incantation
Rising up to the heavens
Seek for eternity?

Kristjan Jaak Peterson (1801-1822) is considered the founder of modern Estonian poetry. The lines above have been interpreted as a claim to reestablish the birthright of the Estonian language. He gathered his Estonian poems into two small books but never saw them published; their publication finally occurred a hundred years after his death. Three German poems were published posthumously in 1823. One of Peterson's projects was fulfilled in his lifetime–the German version of Kristfrid Ganander's Mythologia Fennica, a dictionary of Finnish mythological words and names (the Swedish original was published in 1789). Peterson's translation of Ganander's dictionary found many readers in Estonia and abroad, becoming an important source of national ideology and an inspiration for early Estonian literature. Its dominating influence extended through the first decades of the twentieth century. 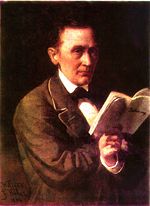 The most outstanding achievements in folklore imitate the epics: The national epic Kalevipoeg was compiled by doctors of Estonian origin: Friedrich Robert Faehlmann began the epic and it was finished by Friedrich Reinhold Kreutzwald. The romantic ideology of the nineteenth century laid down the requirements for a national literature. The idea of an epic was the product of a humanist circle called the Learned Estonian Society (Gelehrte Estnische Gesellschaft), where Faehlmann had presented his paper in 1839 on a mythical hero called Kalewipoeg (Son of Kalew). After Faehlmann's death in 1850 the society handed the manuscripts over to Kreutzwald. The first edition of "Kalevipoeg" (1857-61) was bilingual, with a German text presented side by side with the Estonian original. A popular Estonian edition in a single volume followed in 1862.

Lydia Koidula (1843–1886) was the initiator of a tradition of Estonian patriotic and women's poetry during the era.

In the late nineteenth century a poet emerged who has had a profound impact on Estonian poetry as a whole—Juhan Liiv (1864–1913). During the last decade of the nineteenth century, a contemporary of Liiv's, Eduard Vilde (1865–1933), introduced a realistic direction into Estonian prose.

With the formation of the group Noor-Eesti (Young Estonia) in 1905, led by the poet Gustav Suits (1883–1956), the linguist and poet Villem Grünthal-Ridala and the reformer of the Estonian language Johannes Aavik (1880–1973), Estonian literature gained a new intellectual impetus. The most prominent prose writer of the time, still widely read today, was Oskar Luts (1887–1953). Another significant author was Jaan Oks (1884–1918). The poetry of Ernst Enno (1875–1934) gained popularity much later.

The rationality of the Young Estonians was counterbalanced by the group of writers from the Siuru movement, established in 1917. The central poets of Siuru were Henrik Visnapuu (1890–1951) and Marie Under (1883–1980).

After the establishment of the Republic of Estonia, professionalism and diversity followed by the emergence of literary institutions. The Estonian Writers Union was founded in 1922; the literary monthly Looming (Creation) first appeared in 1923 and is still the main periodical of its sort in Estonia. The Cultural Endowment Fund started work in 1925 and is the major provider of grants in the arts in the present-day Republic of Estonia.

The prevailing tendency in prose writing between the two World Wars was realism. The most prominent writer of the era is Anton Hansen Tammsaare (1878-1940), the author of 5-volume epic novel Tõde ja Õigus (Truth and Justice, 1926-1933) is considered one of the major works of Estonian literature.[6] Another prominent prose writers were August Mälk (1900-1987), Karl Ristikivi (1912-1977). August Gailit, the incurable romantic appeared on the literary scene along with the Siuru group.

After the Second World War, Estonian literature was split it in two for almost half a century. A number of prominent writers who spent the war years in Estonia, fled to Germany in 1944 (Visnapuu) or to Sweden, either directly or via Finland (Suits, Under, Gailit, Kangro, Mälk, Ristikivi). Many of those who remained behind and did not follow the ideology of the Soviet occupying powers suffered either death in Siberia (Talvik and playwright Hugo Raudsepp) or a combination of repression, a ban on publication and interior exile (Tuglas, Alver, Masing). Despite the modest circumstances of the war and post-war years, creative activity and publishing started almost immediately, both in the temporary stopovers in Finland, and in the refugee camps in Sweden and Germany.

In 1945, the Estonian Writers Union in Exile was founded in Stockholm. In 1950, Bernard Kangro began publishing the cultural magazine Tulimuld in Lund (published until 1993). Eesti Kirjanike Kooperativ, the largest Estonian-language publishing house in exile was set up and its method of book distribution secured the continuity of literary life on an institutional level and on a global scale, except in the Soviet controlled homeland. Estonians abroad also did their best to introduce Estonian literature to the world: In the USA, Ivar Ivask (1927-1992) edited World Literature Today in which he published numerous articles and reviews about Estonian literature.

The poetry collection by surrealist Ilmar Laaban (1921-2000) was at first the only modernist work, until 1953 when Karl Ristikivi, essentially a conservative writer, published his novel, The Night of the Souls. Arved Viirlaid's (1922) novel Seitse kohtupäeva (Seven Days of Trial, 1957) was a detour into modernism. Ilmar Jaks (1923) became a more consistent cultivator of the technique of the modern novel. The subject matter of literary output was greatly enriched by descriptions of the countries where various writers had settled, like Karl Rumor (1886-1971) in Brazil, or Gert Helbemäe (1913-1974) in England. In the second half of the 1950s, Kalju Lepik (1920-1999) was a poet in exile who rose to prominence alongside Bernard Kangro. Kalju Lepik's first visit to his homeland in 1990 and the publication of his last collections of poetry there, symbolizes the end of the split.

Behind the Iron Curtain

From the late 1960s, due to the political stagnation that followed the crushing of the Prague Spring in 1968, was reflected in Rummo's initially banned minimalist collection. The collection did not appear in its entirety until 1989. So-called alternative literature was disseminated in manuscript form, the most significant authors in this field were the dissident poet Johnny B. Isotamm (born 1939) and the prose writer Toomas Vint (born 1944). The most remarkable poet of the 1960s and -70s was Juhan Viiding (pseudonym Jüri Üdi, 1948-1995) whose first collection Nerve Print appeared in 1971. Despite all attempts to ban it, the popular and song-like nature of Hando Runnel's patriotic verse secured its huge circulation. His collection, The Purple of the Red Evenings, 1982, was allowed into print but the publication of any reviews in the press remained forbidden.

Jaan Kross and Jaan Kaplinski remain Estonia's best known and most translated writers. Jaan Kross has been tipped for the Nobel Prize for Literature on several occasions. On his return from the labor camps and internal exile in Russia where he spent the years 1946-1954 as a political prisoner, Kross renewed Estonian poetry. Kross began writing prose in the latter half of the 1960s. Jaan Kaplinski has become the central and most productive Modernist in Estonian poetry. Kaplinski has written essays, plays and has translated. He has lectured in Vancouver and Calgary,Ljubljana and Trieste, Taipei and Stockholm, Bologna and Cologne, London, and Edinburgh. He has been Writer-in-Residence at the University of Wales, Aberystwyth.

Retrieved from https://www.newworldencyclopedia.org/p/index.php?title=Estonian_literature&oldid=1066243
Categories:
Hidden category:
This page was last edited on 18 March 2022, at 23:59.
Content is available under Creative Commons Attribution/Share-Alike License; additional terms may apply. See Terms of Use for details.