Testosterone is a steroid hormone that acts in vertebrates to regulate many sexually dimorphic traits and express many fitness related traits in males (Zysline et al. 2006). A hormone is a secreted chemical messenger that coordinates cell-to-cell communication. Testosterone belongs to the class of steroid hormones known as androgens—the generic term for any natural or synthetic compound that stimulates or controls the development and maintenance of masculine characteristics in vertebrates by binding to androgen receptors, including the activity of the accessory male sex organs and development of male secondary sex characteristics.

Steroid hormones such as testosterone (and estradiol on the female side) act early in development to organize male or female phenotypes that are activated later (Zysline et al. 2006). Testosterone's chemical formula is C19H28O2.

Although testosterone in vertebrates can activate male-typical phenotypes, testosterone's presence and action is not limited to males, and both sexes of most vertebrate taxa naturally produce testosterone (Zysline et al. 2006; Nelson 2000). In mammals, including humans, testosterone is primarily synthesized in the male's testes, but small amounts are also secreted by the female ovaries, the placenta, and the adrenal glands of both sexes.

Scientists have isolated testosterone and developed procedures for utilizing it medically to treat a wide variety of medical and psychological conditions, including low libido and even depression. This represents one aspect of human creativity—utilizing it in service to others. However, human creativity can also be applied toward ill purposes, and testosterone provides a good example. Despite known side effects, some have used testosterone and other steroids to gain unfair competitive advantage in sports. Some athletes have admitted winning competitions, such as track and field events while circumventing the rules with performance enhancing drugs, to the detriment of honest competitors. This case of sacrificing others and the sport for one's personal gain reveals an unethical application of human creativity.

Testosterone's effects can be classified as either anabolic (related to protein synthesis and growth) or virilizing (related to the biological development of male sex characteristics). However, the two categories are closely related:

Greatly differing amounts of testosterone prenatally, at puberty, and throughout life account for a share of biological differences between males and females. On average, the adult male human produces about 20 to 30 times the amount of testosterone synthesized by an adult female (Larsen, et al. 2002). Nonetheless, like men, women rely on testosterone (albeit in significantly smaller quantities) to maintain libido, bone density, and muscle mass throughout their lives.

Since testosterone was isolated by scientists in the 1930s, it has been used to treat a host of clinical issues, ranging from hypogonadism (the underproduction of natural testosterone) to certain forms of cancer, osteoporosis, and depression. More recently, testosterone replacement therapy has become available to older men, whose testosterone levels naturally decline with age; however, large-scale trials to assess the efficiency and long-term safety of this treatment are still lacking.

Anabolic steroids, a category which includes testosterone and its derivatives, have also received attention due to their controversial use to increase muscle mass and enhance athletic performance. Anabolic steroids were designated a controlled substance by the United States Congress in 1990, under the Anabolic Steroid Control Act; Canada, the United Kingdom, Australia, Argentina, and Brazil also have laws controlling their use and distribution (The Steroid Group, 2006).

Like other steroid hormones, testosterone is derived from cholesterol, a sterol lipid with the chemical formula C27H45OH. Steroids are characterized by a carbon skeleton with four fused rings; they are distinguished by the functional groups attached to the rings.

Androgens (such as testosterone) are a major class of steroid hormones responsible for the development of male secondary sex characteristics. Testosterone is derived from the androgen androstenedione via a reduction of its 17-keto group.

The presence of a hydroxyl group (-OH) at position C-17 has enabled the development of synthetic forms of testosterone that can be administered in therapeutic treatments:

How testosterone works as a signaling molecule

Most hormones are synthesized in a specialized tissue, then released to target cells as needed. The largest amount of testosterone is produced by the testes in men, but it is also synthesized in smaller quantities in women by the thecal cells of the ovaries, the placenta, and the zona reticularis of the adrenal cortex in both sexes.

In the testes, testosterone is specifically produced by the Leydig cells. The male generative glands also contain the Sertoli cells, which require testosterone for spermatogenesis (the synthesis of spermatozoa).

Because testosterone is not soluble in water, it is transported to target cells bound to a specific plasma protein called sex hormone binding globulin (SHBG). When a hormone arrives at the target cell, it binds to, or “fits,” a site on the receptor protein. Binding creates a ligand-receptor complex, causing a conformational change (a change in the molecule's structural arrangement) that initiates a sequence of reactions leading to a change in cellular function.

The rate of hormone biosynthesis and secretion is often regulated by feedback circuits, in which changes in the level of one hormone affects the levels of other hormones. Luteinizing hormone (LH), which is synthesized and secreted by the anterior lobe of the pituitary gland, functions in the regulation of testosterone levels. LH acts upon the Leydig cells of the testis to stimulate testosterone production. LH's release is controlled by pulses of gonadotropin-releasing hormone (GnRH) from the hypothalamus. These pulses, in turn, are subject to estrogen feedback from the gonads.

Role in human growth and development

Testosterone has its greatest impact on sexual differentiation during two stages of life: (1) Before birth and (2) during puberty.

Most prenatal androgen effects in humans occur between the 7th and 12th weeks of gestation, and are responsible for the masculinization of the developing fetus. Changes include closure of the perineum, thinning and rugation of the scrotum, growth of the penis, and closure of the urethral groove to the tip of the penis.

Prenatal virilization of genetic females and undervirilization of genetic males are common causes of ambiguous genitalia and intersex conditions. Undervirilization can occur if a genetic male cannot produce enough androgen or the body tissues are unable to respond to it. In females, intrauterine exposure to heightened levels of testosterone leads to profound genital abnormalities. In humans, for example, excessive exposure to androgens in the womb gives a girl a greatly enlarged clitoris and a vagina that is partially fused shut. In the most severe form of congenital adrenal hyperplasia, complete masculinization of a genetically female fetus results in an apparently normal baby boy with no palpable testes. More often, the virilization is partial and the genitalia are ambiguous.

Postnatal effects in both males and females are mostly dependent on the levels and duration of circulating free testosterone.

Early postnatal effects are the first visible effects of rising androgen levels in childhood, and occur in both boys and girls during puberty. They include adult-type body odor, increased oiliness of skin (acne), appearance of pubic hair and underarm hair, growth spurts (accelerated bone maturation), and the appearance of fine upper lip and sideburn hair.

In males, the following advanced postnatal effects typically manifest themselves during late puberty:

Adult testosterone effects are more clearly demonstrable in males than in females, but are likely important to both sexes. Some of these effects may decline as testosterone levels decrease in the later decades of adult life. They include maintenance of muscle mass, maintenance of bone density, libido, and clitoral engorgement/penile erection frequency.

Behavioral effects of hormones are difficult to understand and to attribute to a given cause; in addition, a given hormone can have very different effects on behavior depending on the region of the central nervous system on which it acts. Nonetheless, high levels of circulating testosterone have been correlated to aggression in a variety of vertebrate species. For elephant bulls in musth (period condition in bull elephants), the amount of testosterone in the blood soars to levels fifty times higher than usual; during this period, male elephants demonstrate a mix of desperate lust and rage and are likely to engage in fights with other similarly affected males. Moreover, abnormal intrauterine exposure to androgens fosters aggression in females: Female mice that are snuggled between their brothers during fetal life are exposed to higher levels of androgens than females nestled between sisters and are more aggressive adults (Judson 2002).

The aggression associated with high levels of naturally circulating testosterone seems to be closely related to reproduction. For example, in male red-winged blackbirds (agelaius phoeniceus), testosterone levels peak during the two-week period when males are defending breeding territories and guarding their mates from rivals (Barnard 2003).

The use of synthetic testosterone and other anabolic steroids

Various forms of exogenous (externally produced) testosterone and other anabolic steroids are used in medical treatment and (more controversially) as a bodybuilding tool or performance enhancer; they are most commonly administered in oral, injectable, and transdermal form. 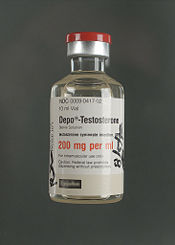 An injectable form of Depo-Testosterone cypionate.

Testosterone was originally used for the treatment of males who have little or no natural testosterone production—that is, males with hypogonadism. Hormone replacement therapy maintains blood testosterone levels in the normal range.

Over the years, testosterone has been administered to treat a variety of conditions, including infertility, lack of libido or erectile dysfunction, osteoporosis, and for penile enlargement, height growth, bone marrow stimulation and reversal of anemia, and even appetite stimulation.

To take advantage of its virilizing effects, testosterone is often administered to female-to-male transsexual men as part of hormone replacement therapy, with a "target level" of the normal male testosterone level.

Some drugs work to reduce testosterone's effects. For example, finasteride inhibits the conversion of testosterone into its metabolite dihydrotestosterone (DHT). By lowering levels of DHT, finasteride may be used to treat benign prostatic hyperplasia (BPH) and androgenetic alopecia (male-pattern baldness).

Use in athletics and bodybuilding 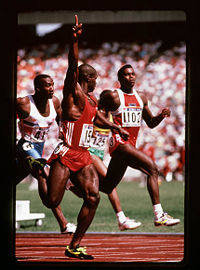 Ben Johnson celebrating a victory at the 1988 Olympic games before he was disqualified for doping.

Testosterone administered to an athlete in order to improve performance is considered to be a form of doping in most sports. After a series of scandals and publicity in the 1980s (such as runner Ben Johnson's improved performance at the 1988 Summer Olympics), prohibitions of anabolic steroid use were renewed or strengthened by many sports organizations. Testosterone and other anabolic steroids were designated a controlled substance by the United States Congress in 1990.

Side effects and risks of anabolic steroid use

Some side effects are gender specific. Development of breast tissue in males, a condition called gynecomastia, is usually caused by high levels of circulating estrogen, the result of the increased conversion of testosterone to estrogen via an aromatase enzyme. Another male-specific side effect is testicular atrophy, a temporary reduction in the size of the testes. Possible female-specific side effects include increases in hair, deepening of the voice, enlarged clitoris (clitoral hypertrophy), as well as temporary decreases in menstrual cycles. When taken during pregnancy, anabolic steroids can affect fetal development.

A popular conception, perhaps misconception, regarding the side effects of anabolic steroids is that use leads to increased aggression, known in popular parlance as “roid rage.” Some early studies have shown a slight correlation between manic symptoms and anabolic steroid use; however, more comprehensive and recent studies have brought into question their methodology and conclusions (Pope and Katz 1988). Many scientists and medical professionals have concluded that anabolic steroids do not markedly increase aggressive behaviors (Fudala et al. 2003; Pope et al. 2000; O’Conner 2002).