In mammals, the adrenal glands (also known as suprarenal glands) are the triangle-shaped endocrine glands that sit atop the kidneys, as indicated by their name (ad, "near" or "at" + renes, "kidneys"). In humans, their height measures half an inch and they are approximately three inches in length. The adrenal glands are chiefly responsible for regulating the stress response through the synthesis of corticosteroids and catecholamines, including cortisol and adrenaline.

The function of the adrenal glands reveals the complex and harmonious coordination of the human body and the endocrine system. Whenever there is a stressful condition, whether physical or psychological, the body reacts to address the stress, through production and distribution of hormones such as cortisol ("the stress hormone") and adrenaline. When the stressful condition is removed, the body returns to homeostasis. Certain diseases, such as tuberculosis, cancer, or AIDS, can disrupt this harmonious balance and impact the production of these hormones. Such conditions as Addison's disease and Cushing's syndrome represent cases whereby the production of cortisol is abnormally low or excessively high. 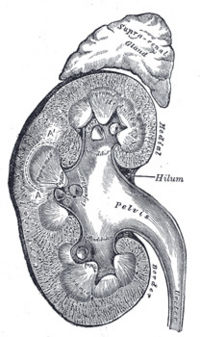 Above each human kidney is one of the two adrenal glands

The adrenal gland is separated into two distinct structures, the adrenal medulla and the adrenal cortex. Both structures receive regulatory input from the nervous system.

The adrenal cortex is divided into three layers, or zones. The zona glomerulosa is the outer zone and only secretes aldosterone, a mineralcorticoid responsible for salt, water, and potassium regulation in the body. The middle zone, the zona fasciculata, secretes glucocorticoids. They increase the concentration of plasma glucose and are important in the natural stress response of the body. The zona reticularis is the inner layer and secretes mostly androgens. Some cells of the adrenal cortex belong to the hypothalamic-pituitary-adrenal axis and are the source of cortisol synthesis.

Although variations of the blood supply to the adrenal glands are common, there are usually three arteries that supply each adrenal gland: the superior, middle, and inferior adrenal (or suprarenal) arteries.

Excess production of aldosterone from the zona glomerulosa is referred to as hyperaldosteronism. Symptoms include hypertension, muscle weakness, hypokalemia (low serum potassium), hypernatremia (high serum sodium levels), and associated metabolic alkalosis. Common treatment modality includes the treatment of the underlying cause, if any, and aldosterone antagonists, such as spironolactone.

Cushing's syndrome, or hypercortisolism, is an endocrine disorder caused by the presence of excessive levels of cortisol in the body. Common characteristics of the disorder include moon face, buffalo hump present on the back, and trunkal obesity. Other findings include hypertension, weakness, and osteoporosis. Some patients may present with glucose intolerance resulting in diabetes and also with emotional liability. Treatment involves resolution of the underlying cause, which may be medical or surgical.

Adrenal androgen excess is another example of a hyperfunctioning state. It is due to increase production of the hormones dehydroepiandrosterone and androstenedione, both which are precursors to testosterone. Signs and symptoms include hirsutism (excess body and facial hair), acne, and virilization (development of male secondary sexual characteristics in females). Adrenal androgen excess can be related with the secretion of other adrenal hormones and may present as a syndrome with some characteristics of Cushing's syndrome.

Addison's disease, also known as chronic adrenal insufficiency, or hypocortisolism, is a rare endocrine and hormonal disorder. It is the hyposecretion of all adrenal steroid hormones, meaning that abnormally low quantities of those hormones are produced by the adrenal gland.

Addison's disease usually follows the autoimmune destruction of the adrenal cortex, in which the immune system creates antibodies against the body's own tissues. The adrenal glands fail to produce enough of the hormone cortisol and, sometimes, the hormone aldosterone. Inherited disorders in which defective enzymes for adrenal steroid production are produced are often marked by excess secretion of androgen (sex steroid). This is because substrates that cannot be made into cortisol or aldosterone are converted to androgens. Treatment of the disease involves hormone replacement therapy.

Although quite rare, tumors of the adrenal gland do occur. Pheochromocytoma refers to the development of a benign tumor in the medulla which oversecretes epinephrine (adrenaline) and norepinephrine (noradrenaline). The condition causes high blood pressure and symptoms include headache, increased heart rate, and excessive sweating.