Corticosteroid is any of a class of steroid hormones that either are produced in the adrenal cortex or are synthetic analogues. Corticosteroids have similar chemical structures but are involved in a wide range of physiologic systems such as stress response, carbohydrate metabolism, protein catabolism, fat metabolism, retention of sodium in the kidneys, immune response and regulation of inflammation, bone development, blood electrolyte levels, and behavior. Corticosteroids also are known as adrenocortical hormones and adrenocorticosteroids.

There are two main groups of corticosteroids. Glucocorticoids, such as cortisol, act as anti-inflammatory agents and have a large number of other functions, such as carbohydrate and protein metabolism. Mineralcorticoids, such as aldosterone, control salt and water balance.

The proper homeostasis and functioning of the body depends on natural corticosteroids, with their coordination of the activity of cells in various parts of the body. The creation of synthetic equivalents has allowed the treatment of a very large number of conditions, such as arthritis, asthma, skin inflammation, spinal cord injury, and hormone replacement in those with Addison's disease.

Corticosteroids are a class of steroid hormones, which, simply put, are steroids that act as hormones. Steroids are a group of natural or synthetic, fat-soluble, organic compounds belonging to the class of lipids and characterized by a molecular core of four fused rings totaling 17 carbon atoms: three six-carbon rings and one five-carbon ring fused together. Cholesterol is the most abundant steroid in mammalian cells. Hormones are chemical messengers secreted by cells (including tissues and organs) in one part of a multicellular organism that travel to and coordinate the activities of different cells. Steroids are just one of an enormous range of chemicals that are used for this type of cell-to-cell communication, such as peptides (chains of amino acids).

There are two main groups of corticosteroids. 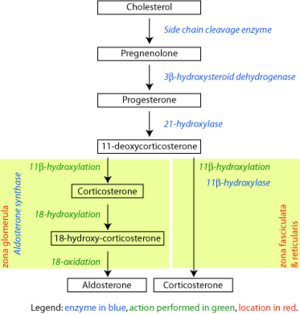 The corticosteroids are synthesized from cholesterol within the adrenal cortex. Most steroidogenic reactions are catalysed by enzymes of the cytochrome P450 family. They are located within the mitochondria and require adrenodoxin as a cofactor (except 21-hydroxylase and 17α-hydroxylase).

Classes of corticosteroids based on chemical structure

Corticosteroids are generally grouped into four classes, based on chemical structure. Allergic reactions to one member of a class typically indicate an intolerance of all members of the class.

The italicized steroids are often used in the screening of allergies to topical steroids (Wolverton 2001).

Corticosteroid varieties based on method of use

Topical steroids are applied topically on the skin, eye, and mucous membranes.

Systemic forms: Oral, injection, and parenteral. Corticosteroids are called systemic steroids if taken orally or given by injection. Oral forms are those taken by mouth and include such as prednisone and prednisolone (DermNet NZ 2008). Other systemic forms are available in injectibles for use intravenously and parenteral routes. Parenteral refers to a route of administration that involves piercing the skin or mucous membrane (DermNet NZ 2008).

Synthetic glucocorticoids are used in the treatment of joint pain or inflammation (arthritis), temporal arteritis, dermatitis, allergic reactions, asthma, hepatitis, systemic lupus erythematosus, inflammatory bowel disease (ulcerative colitis and Crohn's disease), sarcoidosis and for glucocorticoid replacement in Addison's disease or other forms of adrenal insufficiency. Topical formulations are also available for the skin, eyes, lungs, nose, and bowels. Corticosteroids are also used supportively to prevent nausea, often in combination with 5-HT3 antagonists (e.g. ondansetron). Other uses of glucocorticoids include inhibition of vomiting after chemotherapy, treatment of spinal cord injuries, treatment of septic shock, and treatment of excessive hair growth (Uretsky 2002). Cortisone and hydrocortisone, which have both glucocorticoid and mineralocorticoid effects, are preferred for replacement therapy of natural hormone deficiency, while synthetic compounds, which typically have greater anti-inflammatory effects with less impact on salt and water balance, are preferred for other purposes.

Fludrocortisone (Florinef) is used for treament of mineralocorticoid deficiency, where there is excessive sodium loss through the kidneys, with resultant water loss (Uretsky 2002).

Clinical and experimental evidence indicates that corticosteroids can cause permanent eye damage by inducing central serous retinopathy (CSR, also known as central serous chorioretinopathy, CSC). A variety of steroid medications, from anti-allergy nasal sprays (Nasonex, Flonase) to topical skin creams, to eye drops (Tobradex), to Prednisone have been implicated in the development of CSR.

Tadeusz Reichstein together with Edward Calvin Kendall and Philip Showalter Hench were awarded the Nobel Prize for Physiology and Medicine in 1950 for their work on hormones of the adrenal cortex, which culminated in the isolation of cortisone.

Corticosteroids have been used as drug treatment for some time. Lewis Sarett of Merck & Co. was the first to synthesize cortisone, using a complicated 36-step process that started with deoxycholic acid, which was extracted from ox bile. The low efficiency of converting deoxycholic acid into cortisone led to a cost of US $200 per gram. Russell Marker, at Syntex, discovered a much cheaper and more convenient starting material, diosgenin, from wild Mexican yams. His conversion of diosgenin into progesterone by a four-step process now known as Marker degradation was an important step in mass production of all steroidal hormones, including cortisone and chemicals used in hormonal contraception. In 1952, D.H. Peterson and H.C. Murray of Upjohn Co. developed a process that used Rhizopus mold to oxidize progesterone into a compound that was readily converted to cortisone. The ability to cheaply synthesize large quantities of cortisone from the diosgenin in yams resulted in a rapid drop in price to US $6 per gram, falling to $0.46 per gram by 1980. Percy Julian's research also aided progress in the field. The exact nature of cortisone's anti-inflammatory nature remained a mystery for years after however, until the leukocyte adhesion cascade and the role of phospholipase A2 in the production of prostaglandins and leukotrienes was fully understood in the early 1980s.