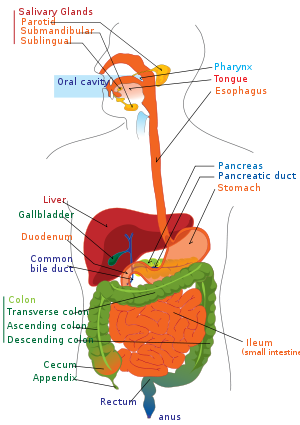 The gastrointestinal tract (GI tract), also called the digestive tract, alimentary canal or gut, is the system of organs within multicellular animals that takes in water and food, extracts energy and nutrients from the food, and expels the remainder as waste. The major functions of the GI tract are digestion and excretion.

Digestion refers to the process of metabolism whereby a biological entity applies both mechanical and chemical procedures to reduce a substance to component parts that are then absorbed into the body and distributed throughout via the circulatory system (Silverthorn 2004). Excretion is the process of eliminating the waste products of metabolism and other non-useful materials.

The digestive process involves the cooperative work of many body components, including the heart, brain, liver, and pancreas. For example, the heart directs blood to the area and the liver and pancreas secrete digestive enzymes. The process also reflects individuality. For instance, some individuals can digest milk or eat peanuts, while others may have an allergy to one or both of these, and people enjoy different tastes.

The GI tract differs substantially from animal to animal. For instance, some animals have multi-chambered stomachs, while some animals' stomachs contain a single chamber. In a normal human adult male, the GI tract is approximately 6.5 meters (20 feet) long and consists of the upper and lower GI tracts. The tract may also be divided into foregut, midgut, and hindgut, reflecting the embryological origin of each segment of the tract.

In humans, the gastrointestinal tract is a long tube with muscular walls comprising four different layers: inner mucosa, submucosa, muscularis externa, and the serosa (see histology section). It is the contraction of the various types of muscles in the tract that propel the food.

The GI tract can be divided into an upper and a lower tract. The upper GI tract consists of the mouth, pharynx, esophagus, and stomach. The lower GI tract is made up of the intestines and the anus.

The upper GI tract consists of the mouth, pharynx, esophagus, and stomach.

The upper GI tract roughly corresponds to the derivatives of the foregut, with the exception of the first part of the duodenum (see below for more details.)

The lower GI tract comprises the intestines and anus.

Accessory organs to the GI tract help in digestion by releasing powerful enzymes and other fluids that breakdown macromacules into smaller molecules that can be absorbed by the digestive system. Two such organs are the liver and pancreas.

The liver secretes bile into the small intestine via the biliary system, employing the gall bladder as a reservoir. Apart from storing and concentrating bile, the gall bladder has no other specific function. The pancreas secretes an isosmotic fluid containing bicarbonate and several enzymes, including trypsin, chymotrypsin, lipase, pancreatic amylase, and nucleolytic enzymes (deoxyribonuclease and ribonuclease), into the small intestine.

The human embryo has three germ layers: endoderm, mesoderm, and ectoderm. These layers differentiate and give rise to various structures.

The gut is an endoderm-derived structure. At approximately the sixteenth day of human development, the embryo begins to fold ventrally (with the embryo's ventral surface becoming concave) in two directions: the sides of the embryo fold in on each other and the head and tail fold towards one another. The result is that a piece of the yolk sac, an endoderm-lined structure in contact with the ventral aspect of the embryo, begins to be pinched off to become the primitive gut. The yolk sac remains connected to the gut tube via the vitelline duct. Usually this structure regresses during development; in cases where it does not, it is known as Meckel's diverticulum.

During fetal life, the primitive gut can be divided into three segments: foregut, midgut, and hindgut. Although these terms are often used in reference to segments of the primitive gut, they are nevertheless used regularly to describe components of the definitive gut as well.

Four organs are subject to specialization in the kingdom Animalia.

The gastrointestinal tract is also a prominent part of the immune system (Coico et al. 2003). The low pH (ranging from 1 to 4) of the stomach is fatal for many microorganisms that enter it. Similarly, mucus (containing IgA antibodies) neutralizes many of these microorganisms. Other factors in the GI tract help with immune function as well, including enzymes in the saliva and bile. Enzymes such as Cyp3A4, along with the antiporter activities, are also instrumental in the intestine's role of detoxification of antigens and xenobiotics, such as drugs, involved in first pass metabolism. Health-enhancing intestinal bacteria serve to prevent the overgrowth of potentially harmful bacteria in the gut. Microorganisms are also kept at bay by an extensive immune system comprising the gut-associated lymphoid tissue (GALT).

The GI tract has a uniform general histology with some differences which reflect the specialization in functional anatomy (Kierszenbaum 2002).

The GI tract can be divided into 4 concentric layers:

The mucosa is the innermost layer of the GI tract, surrounding the lumen, or space within the tube where digestion mainly takes place. This layer comes in direct contact with the food (or bolus), and is responsible for absorption and secretion, both of which are important processes in digestion.

The mucosa can be divided into:

The mucosae are highly specialized in each organ of the GI tract, facing a low pH in the stomach, absorbing a multitude of different substances in the small intestine, and also absorbing specific quantities of water in the large intestine. Reflecting the varying needs of these organs, the structure of the mucosa can consist of invaginations of secretory glands (e.g., gastric pits), or it can be folded in order to increase surface area (examples include villi and plicae circulares).

The submucosa consists of a dense irregular layer of connective tissue with large blood vessels, lymphatics, and nerves branching into the mucosa and muscularis. It contains Meissner's plexus, an enteric nervous plexus, situated on the inner surface of the muscularis externa. This network of nerves connects the outer smooth muscles to the innermost mucous membranes in the stomach and small intestines. The function of the plexus is not completely known.

The muscularis externa consists of a circular inner muscular layer and a longitudinal outer muscular layer. The circular muscle layer prevents the food from going backwards and the longitudinal layer shortens the tract. The coordinated contractions of these layers is called peristalsis and propels the bolus, or balled-up food, through the GI tract.

Between the two muscle layers are the myenteric or Auerbach's plexus.