While chemical digestion does not take place in the colon—there are no digestive enzymes produced after the small intestine—there is a symbiotic relationship with bacteria that helps break down fiber, producing some nourishment for the body. Herbivores (like horses and rabbits), which depend on microbial fermentation, have a larger colon than omnivores (like pigs and humans), which in turn is larger than that of carnivores (such as dogs and cats) (Bowen 2000).

The large intestine is the terminal, tubular portion of the gastrointestinal tract (gut) of vertebrates prior to the anus or cloaca. Three major portions of the large intestine generally are recognized in mammals: caecum (blind-ended pouch), colon (majority of the length of the intestine), and rectum (short, terminal segment) (Bowen 2000). The location of the parts of the colon are either in the abdominal cavity or behind it in the retroperitoneum. The colon in those areas is fixed in location.

Lymphatic drainage from the entire colon and proximal two-thirds of the rectum is to the paraortic nodes, which then drain into the cisterna chyli. The lymph from the remaining rectum and anus can either follow the same route, or drain to the internal illiac and superficial inguinal nodes. The dentate line only roughly marks this transition.

Portions of the human colon 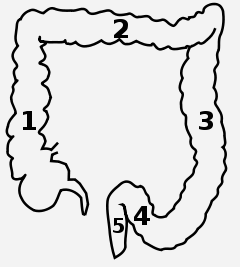 The ascending colon, on the right side of the abdomen, is about 12.5 centimeters long in humans. It is the part of the colon from the cecum to the hepatic flexure (the turn of the colon by the liver). It is retroperitoneal in most humans; that is, in the anatomical space behind (retro) the abdominal cavity. In ruminant grazing animals, the cecum empties into the spiral colon.

Anteriorly, the ascending colon is related to the coils of small intestine, the right edge of the greater omentum, and the anterior abdominal wall. Posteriorly, it is related to the iliacus, the iliolumbar ligament, the quadratus lumborum, the transverse abdominis, the diaphragm at the tip of the last rib, the lateral cutaneous, ilioinguinal, and iliohypogastric nerves, the iliac branches of the iliolumbar vessels, the fourth lumbar artery, and the right kidney.

The ascending colon is supplied by parasympathetic fibers of the vagus nerve (CN X).

The transverse colon is encased in peritoneum, and is therefore mobile (unlike the parts of the colon immediately before and after it). More cancers form as the large intestine goes along and the contents become more solid (water is removed) in order to form feces.

The proximal two-thirds of the transverse colon is perfused by the middle colic artery, a branch of superior mesenteric artery (SMA), while the latter third is supplied by branches of the inferior mesenteric artery (IMA). The "watershed" area between these two blood supplies, which represents the embryologic division between the midgut and hindgut, is an area sensitive to ischemia.

The descending colon is the part of the colon from the splenic flexure to the beginning of the sigmoid colon. It is retroperitoneal in two-thirds of humans. In the other third, it has a (usually short) mesentery. Arterial supply comes via the left colic artery. 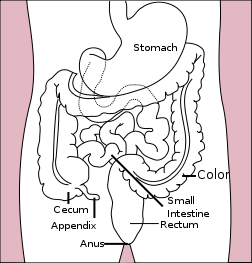 The sigmoid colon is the part of the large intestine after the descending colon and before the rectum. The name sigmoid means S-shaped. The walls of the sigmoid colon are muscular and contract to increase the pressure inside the colon, causing the stool to move into the rectum.

The sigmoid colon is supplied with blood from several branches (usually between two and six) of the sigmoid arteries, a branch of the IMA. The IMA terminates as the superior rectal artery.

Sigmoidoscopy is a common diagnostic technique used to examine the sigmoid colon.

One variation on the normal anatomy of the colon occurs when extra loops form, resulting in a longer than normal organ. This condition, referred to as redundant colon, typically has no direct major health consequences, though rarely volvulus occurs resulting in obstruction and requiring immediate medical attention (Nall 2015).

A significant indirect health consequence is that use of a standard adult colonoscope for endoscopic examination is difficult and in some cases impossible when a redundant colon is present, though specialized variants on the instrument (including the pediatric variant) are useful in overcoming this problem (Lichtenstein et al. 1998).

By the time the chyme has reached this tube, almost all nutrients and 90 percent of the water have been absorbed by the body. At this point some electrolytes like sodium, magnesium, and chloride are left as well as indigestible carbohydrates known as dietary fiber. As the chyme moves through the large intestine, most of the remaining water is removed, while the chyme is mixed with mucus and bacteria known as gut flora, and becomes feces. The bacteria break down some of the fiber for their own nourishment and create acetate, propionate, and butyrate as waste products, which in turn are used by the cell lining of the colon for nourishment. This is an example of a symbiotic relationship and provides about one hundred calories a day to the human body.

The large intestine produces no digestive enzymes—chemical digestion is completed in the small intestine before the chyme reaches the large intestine. The pH in the colon varies between 5.5 and 7 (slightly acidic to neutral). 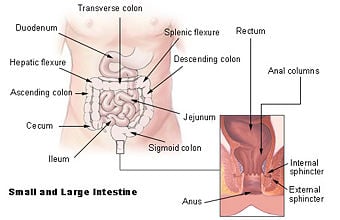 There are a number of diseases or disorders of the colon:

Retrieved from https://www.newworldencyclopedia.org/p/index.php?title=Colon_(anatomy)&oldid=1003966
Categories:
This page was last edited on 28 March 2017, at 15:16.
Content is available under Creative Commons Attribution/Share-Alike License; additional terms may apply. See Terms of Use for details.