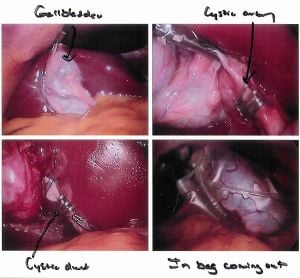 Cholecystectomy seen through a laparoscope

The gallbladder (also gall bladder), or cholecyst, is a pear-shaped organ that stores and concentrates bile until it is needed to aid with fat digestion.

In humans, the gallbladder is about seven to ten centimeters long and dark green in appearance due to its contents (bile). Although the gallbladder is not a necessary organ for survival in humans, it plays valuable roles in digesting fats, concentrating bile, and serving as a bridge between the liver and the intestine. Although loss of the gallbladder impairs the efficiency of digestion, an otherwise healthy and stress-free person, can function well without it.

Because the gallbladder can be removed from humans without much effect and is not present in many animals, it is sometimes mistakenly classified as a vestigial organ—a body part that has lost all or most of its original function through evolution.

The gallbladder has an epithelial lining characterized by recesses called Aschoff's recesses, which are pouches inside the lining. Under the epithelium is a layer of connective tissue, followed by a muscular wall that contracts in response to cholecystokinin, or CCK, a peptide hormone secreted by the duodenum.

The cystic duct, which serves as the entrance and exit to the gallbladder, joins the liver's hepatic duct to form the common bile duct. Bile enters the duodenum through the common bile duct. The duodenum, which is the first part of the small intestine, is where most of digestion takes place. Blood is supplied to the gallbladder by the cystic artery, which runs parallel to the cystic duct. The cystic artery is highly variable, which is of clinical relevance since it is cut and clipped during a cholecystectomy.

The surface marking of the gallbladder is the intersection of the mid-clavicular line, or MCL, and the transpyloric plane at the tip of the ninth rib.

The gallbladder stores and concentrates bile, which is released from the gallbladder after a signal from CCK, which is released from the duodenum. When food containing fat enters the digestive tract, the secretion of CCK is stimulated. CCK in turn produces forceful contractions of the gallbladder, larger amounts of hepatic secretion of bile, enhanced flow of bile into the duodenum, and less resistance of the sphincter of Oddi (Wilson 1991). The sphincter of Oddi serves to keep bile from entering the digestive tract through continuous contraction during times of fasting.

Bile emulsifies fats and neutralizes acids in the partly digested food present in the digestive tract. Bile, which is originally made in the liver, becomes more concentrated while in the gallbladder, increasing its potency and intensifying its effect on fats.

Cholestasis is the blockage of bile excretion from the liver. It can be classified as either intrahepatic, where the obstruction is present in the liver, or as extrahepatic when the obstruction is present outside of the liver. Intrahepatic cholestasis can be due to general and bacterial infections, tuberculosis, drugs, and lymphoma, among other causes. Extraheptic cholestasis can be caused by bile duct tumors, gallstones in the common bile duct, and primary sclerosing cholangitis.

Symptoms of cholestasis include jaundice (which is a yellowing of the skin and eyes), nausea, vomiting, dark urine, itching, and the inability to digest certain foods. It can be diagnosed through a simple blood test to identify high levels of bilirubin and alkaline phosphatase.

Treatment for the pathology depends on the specific underlying cause. If medications and drugs are suspected as the cause, then they should no longer be administered.

Up to 25 percent of all people have gallstones (cholelithiasis), composed of cholesterol, lecithin, and bile acids. These stones can cause colicky shooting abdominal pain, usually in relation with the consumption of a meal, as the gallbladder contracts and gallstones are forced to pass through the bile duct. A surgical procedure known as a cholecystectomy, which is the removal of the gallbladder, is the most common treatment for gallstones. It can be performed by laparoscopic surgery (a minimally invasive surgery within the abdomen or pelvic cavity), and it is in fact one of the most common procedures done through the laparoscope.

People traditionally considered at an increased risk of cholelithiasis are people who are 5 F's:

In about 10 to 15 percent of patients with cholelithiasis, gallstones pass from the gallbladder into the common bile duct and cause an obstruction (Wilson 1991). Patients develop jaundice and abdominal pain along with fever, nausea, and vomiting. Loss of appetite may also occur.

Both acute and chronic inflammation of the gallbladder cause severe abdominal pain, especially after the consumption of a fatty meal. Acute cholecystitis may be accompanied by fever, vomiting, and nausea as well.

Although gallstones may pass on their own, surgery is often required to remove the gallbladder and associated stones if inflammation persists. A cholecystectomy is most often performed using a laparoscope.

A rare clinical entity, gallstone ileus is an intestinal bowel obstruction caused by a large gallstone. It is responsible for up to 25 percent of all small bowel obstructions in patients 65 years and older (Shahat 2002). This condition develops in patients with longstanding gallstone disease in which the gallbladder forms a fistula, an abnormal passageway or duct, with the digestive tract. Large stones, usually 2.5 centimeters or greater in size, pass into the bowel, and generally block the gut at the level of Treitz' ligament or the ileocecal valve, two narrow points in the digestive tract.

The treatment for gallstone ileus is surgical.

Cancer of the gallbladder is a rare, but highly fatal disease that develops in association with gallstones. It has been associated with gallstone disease, estrogens, cigarette smoking, alcohol consumption, obesity, and the female sex. The female to male ratio of afflicted patients is 3:1, and the average age of patients is 70 years at the time of diagnosis. Approximately 6,000 Americans suffer from gallbladder cancer every year. Despite aggressive modern surgical approaches, advanced imaging techniques, and endoscopy, nearly 90 percent of patients who present with cancer of the gallbladder die from the advanced disease, experiencing pain, jaundice, weight loss, and ascites (accumulation of fluid in the abdominal cavity) prior to their downfall (Kennedy 2004).

Of special note is a condition called primary sclerosing cholangitis, which causes inflammation and scarring in the bile duct. It is associated with 7 to 12 percent lifetime risk for gallbladder cancer. The cause is unknown, although, primary sclerosing cholangitis tends to strike younger men who have ulcerative colitis. Polyps are often detected in this condition and have a very high likelihood of malignancy.

Retrieved from https://www.newworldencyclopedia.org/p/index.php?title=Gallbladder&oldid=1054653
Categories:
Hidden category:
This page was last edited on 27 June 2021, at 14:53.
Content is available under Creative Commons Attribution/Share-Alike License; additional terms may apply. See Terms of Use for details.