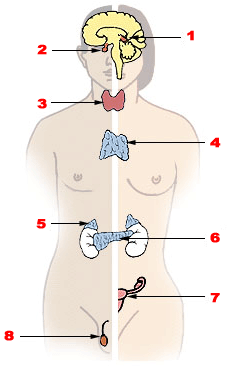 The endocrine system, which is found in vertebrates, is a control system of ductless glands and single cells that secrete chemical messengers called hormones. These hormones pass directly from the glands into the body and are transmitted through the blood or via diffusion, rather than being secreted through tubes. The endocrine system provides a multitude of functions, including influencing growth and development, mood, metabolism, and sexual reproduction.

The endocrine system does not include exocrine glands such as the salivary glands, sweat glands, and glands within the gastrointestinal tract. Exocrine glands release their secretions through ducts into the external environment (Silverthorn 2004). The pancreas, however, has both an endocrine function, in releasing hormones, and an exocrine function, in releasing digestive enzymes.

The endocrine system's incredible complexity and sensitivity reveals the exceptional harmony within biological systems. Hormones produced in one part of the body enter the blood stream and effect specific receptors in another portion of the body. Each component of the system works together in producing the hormone, distributing it, and regulating its concentration. This complexity is sometimes cited as evidence of intelligent design; however, other researchers have used molecular studies to trace the evolution of vertebrate steroid hormones from hundreds of millions of years ago (Bridgham, Carroll, and Thorton 2006). Significantly, present-day pollutants, such as PVC, can interfere with hormones and disrupt this sensitive system.

Hormones are secreted directly into the blood by endocrine glands, which are mostly of mesodermal or entodermal origin (Wyngaarden 1982). As hormones travel through the blood, they are transported to various tissues and organs, whose cells are collectively called target cells. Because hormones function by binding to receptors, only cells having the appropriate receptor for a hormone can respond to the message being carried by that hormone. Hormones can execute their effect at minimum concentrations and their action is terminated either through degradation in the blood or by endocytosis of the receptor-hormone complex. The rate of degradation in the blood refers to a hormone's half life.

The endocrine system depends heavily upon the action of hormones, which are released according to one or more of the following types of influences:

Once hormones are released into the blood, they act upon their target cells by binding to receptors and initiating biochemical responses, known as the cellular mechanism of action of the hormone (Silverthorn 2004). These responses can vary from tissue to tissue and not all cells may respond to a specific hormone. At times, however, one hormone can act on multiple tissues at once. A hormone can also stimulate or inhibit the release of other hormones, in which case it is called a tropic hormone. The anterior pituitary and hypothalamus release several such hormones.

It is not uncommon for more than one hormone to be released at the same time. In such cases, different types of hormone interactions can occur. If the hormones yield a result that is more than additive, a synergistic interaction is said to have taken place. Conversely, if one hormone counteracts the action of another hormone, they are said to be antagonistic to one another. A permissive interaction can occur if one hormone is needed for a second hormone to fully exert its effects. In this situation, the first hormone is said to be permissive to the second one.

Steroid hormones, on the other hand, are made on demand. Because they are derived from cholesterol, they are hydrophobic (water fearing) and tend to travel in the blood with protein carriers. Consequently, they have a longer half life. Receptors for steroid hormones are traditionally found inside the target cell. Responses include the turning on and off of genes and the direct synthesis of fresh proteins. Overall, the cell responses with steroid hormones are slower than those with peptide hormones.

Regulation of hormone release and concentration

After a hormone has been secreted and has exerted its effect, its action must be terminated. This is accomplished by enzymes, which degrade, or breakdown, the hormone into metabolites. The metabolites are excreted along with bile and/or urine. Enzymes may be present in the blood or within the cell itself. Endocytosis of the receptor-hormone complex can also terminate hormone action. As noted above, the rate at which a hormone is broken down in the bloodstream is called the half life of the hormone. It is the amount of time needed to reduce the hormone concentration by one-half. This rate gives a measure of the period of time a hormone is active in the body.

The endocrine system regulates hormone release and concentration through the negative feedback loop. Increases in hormone activity decrease the production and secretion of that hormone. Similarly, a decrease in activity of a hormone prompts an increase in the production and release of that hormone. The immune system as well as other factors contribute as control factors of hormone secretion. Together, these various mechanisms of control regulate the levels of hormones within the body.

The endocrine system works in close relation with the nervous system. It links the brain to the organs that control various aspects of the body. In addition, neurohormones are released by specialized groups of neurons in the brain. These function similarly to hormones and are often categorized into three major groups: catecholamines; hypothalamic neurohormones that monitor hormone release from the anterior pituitary; and hypothalamic neurohormones that monitor hormone release from the posterior pituitary. Neuroendocrinology is an area of medicine that focuses on the overlapping fields between the nervous and endocrine systems.

The pineal gland is located deep in the brain. It secretes melatonin, which is known as the "darkness hormone" because it is secreted at night while we sleep. The body's circadian rhythm, or light-dark cycles, are dependent on the levels of melatonin in the blood. The hormone is classified as an amine hormone derived from tryptophan (amino acid). The specific target of melatonin is unclear. Hormones released:

The anterior pituitary is located in the brain and is part of the larger pituitary gland. It secretes six peptide hormones (in both sexes), all of which are controlled by the trophic hormones of the hypothalamus.

The thyroid gland, located in the neck, produces the thyroid hormones, which are amines consisting of tyrosine (an amino acid) and iodine. It also produces calcitonin, which is a peptide hormone. The thyroid hormones are not necessary for survival in adults; however, they play a crucial role for the growth and development of children. All three hormones are present in both sexes.

The pancreas is a gland that secretes several peptide hormones. They target many tissues and affect metabolism of glucose and other nutrients.

The adrenal cortex is the outer portion of the adrenal gland and it secretes steroids. It is composed of three layers: zona reticularis, zona fasciculata, and zona glomerulosa. Each layer secretes certain hormones.

The adrenal medulla is the inner portion of the adrenal gland. It secretes catecholamines, which are classified as amine hormones. They target many tissues and are involved in the fight or flight response, or the acute stress response, of the body. This response takes over during short-term stress situations.

The testes, or testicles, are the male gonads (reproductive organs) that play a crucial role in sexual development, secondary sex characteristics, and sperm production. These glands (two testicles) are located outside of the male body and are not fully developed until after puberty, which occurs in adolescence.

The female reproductive organ is the ovary. Each female is born with two ovaries, although living with one is possible and common. Each ovary fulfills two important functions: produce eggs and secrete hormones. Females are born with all of their eggs, which mature during the period of puberty.

The thymus gland is the site for lymphocyte (white blood cell) production. It is an immune tissue located in the chest of both sexes. Two peptide hormones are produced and secreted there, both which target lymphocytes and aid in their development.

The human body contains two kidneys, symmetrically located in the posterior region of the abdominal cavity. The adrenal glands sit above the kidneys. In general, humans are able to live with only one kidney. Two important hormones are released from this organ in both males and females.

The heart, a major organ of the body and pump of the circulation system, releases one peptide hormone, atrial natriuretic peptide hormone. Its release from atrial myocytes, located in the atria, is stimulated by high blood pressure, atrial distention and stretching, sympathetic stimulation of β-adrenoceptors, raised sodium concentration, angiotensin-II, and endothelin (a potent vasodilator). The hormone is a 28 amino acid peptide with a 17 amino acid ring.

The liver is responsible for the release of the peptid hormone angiotensinogen and also for the secretion of the peptide hormones referred to as insulin-like growth factors. The former consists of 453 amino acid residues and is cleaved to form angiotensin, which is the active form of the hormone.

The cells of the stomach and small intestine mostly secrete hormones that aid in digestion and also cause the absorption of nutrients. They are classified as peptide hormones and target mostly the gastrointestinal tract and pancreas. The major hormones secreted are:

The skin is a collection of cells that serves as a protection layer in humans. Although it does not secrete hormones per se, like other organs, it does contain an intermediate form of an important hormone. The cells of the skin contain Vitamin D3, which is the precursor of 1,25 dihydroxy-vitamin D3, or calciferol. Vitamin D3 is converted into its active form by the sun.

Adipose tissue, which is made up of adipocyte cells, stores energy in the form of fat. It also provides insulation for the body. It primarily secretes a peptide hormone called leptin, which circulates in the blood at levels proportional to body fat. It also secretes several other hormones including estradiol.

Although not usually thought of as a gland, the placenta does secrete hormones. It is present only in pregnant females. Nutrient and gas transfer between the mother and fetus occurs through the placenta. The placenta also serves as a barrier and attempts to filter out harmful substances before they are able to pass on to the fetus.

In females, the ovarian follicle and corpus luteum each secrete estrogens, mainly estradiol, and progesterone. These aid in egg maturation and prepare for implantation of the egg into the endometrium of the uterus.

The field of medicine that deals with disorders of the endocrine glands is endocrinology, a branch of the larger field of internal medicine. Diseases of the endocrine system are common and can result when the sensitivity of target cells to hormones has varied. Other causes of endocrinopathies include hyper or hypo secretion of hormone, ectopic production of hormone, or iatrogenic factors (physician induced). Some common pathologies include diabetes mellitus and thyroid disease.

Organs are not the sole way for hormones to be released into the body; there are a host of specific cells that secrete hormones independently. These are called the diffuse endocrine system and include myocytes in the atria of the heart and epithelial cells in the stomach and small intestine. In fact, if one were to classify any chemical excretions by the term "hormone," every cell in the human body could be considered a part of the endocrine system.