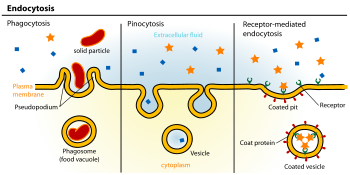 Endocytosis is a process where cells ingest material (macromolecules, low-molecular weight molecules, and particles) from outside the cell by enclosing it with a portion of their cell membrane and bringing it into the cell in a membrane-bound vesicle. In other words, a small portion of the cell membrane (plasma membrane) invaginates and progressively encloses the extracellular substance, and then pinches off inside the cell to form a membrane-bound, intracellular vesicle with the ingested material (Alberts et al. 1989). The function of endocytosis is the opposite of exocytosis, in which materials packaged in secretory vesicles inside the cell fuse with the plasma membrane and open to the exterior space, releasing the material (Alberts et al. 1989).

Endocytosis is used by cells because most substances important to them are large polar molecules, and thus cannot pass through the hydrophobic plasma membrane. The material tends to remain sequestered in vesicles and does not mix with other macromolecules or organelles in the cytoplasm, other than specific membranes for which it is destined, causing a directed transfer between the inside and outside of the cell (Alberts et al. 1989). Typically, the internalized molecules trapped in the intracellular vesicles eventually fuse with the membrane-bound lysosomes and are degraded (Khalil et al. 2006).

Endocytosis may involve the ingestion of fluid and solutes or the ingestion of large particles (such as microorganisms and cell debris) (Alberts et al. 1989). The mechanism of internalizing macromolecules into cells is an intricately coordinated process. Through understanding the various endocytic uptake pathways, mechanisms can be improved for successful non-viral delivery of therapeutic genes to the particular target cells, such as necessary for gene therapy (Khalil et al. 2006).

Overview and categories of endocytosis

Many substances needed by the cell cannot cross the plasma membrane because of their size or hydrophilic nature. Endocytosis, or the vesicular uptake of extracellular materials, is a means whereby the macromolecules can be internalized by a cell. Khalil et al. (2006) succinctly define endocytosis as "the cellular uptake of macromolecules and solutes into membrane-bound vesiciles derived by the invagination and pinching off of pieces of the plasma membrane."

The absorption of material from the outside environment of the cell is commonly divided into two broad categories: phagocytosis and pinocytosis. These two categories can be distinguished primarily by the size of the material ingested and vesicles formed and by phagocytosis being dependent on actin polymerization as a key step in the ingestion (Liu 2003).

Phagocytosis. Phagocytosis (literally, "cell-eating") is the process by which cells ingest large objects, such as cells that have undergone apoptosis, bacteria, or viruses. The membrane folds around the object, and the object is sealed off into large vesicles, called phagosome or vacuoles, generally larger than 250 nm in diameter (Alberts et al. 1989).

Many of the molecules ingested by cells by either phagocytosis or pinocytosis end up in lysosomes to be degraded. Phagosomes fuse with lysosomes to form phagolysosomes, whereas fluid and macromolecules ingested by pinocytosis first are transfered to endosomes (membrane-bound organelles) and then carried to lysosomes (Alberts et al. 1989). Amino acids, sugars, and nucleotides that occur as breakdown products from material from phagosomes and endosomes fusing with lysosomes is transported across the lysosomal membrane into the cytosol, where they can be used by cell (Alberts et al. 1989).

Phagocytosis generally is restricted to specialized phagocytic mammalian cells, such as macrophages, monocytes, and neutrohiles, which help to clear large pathogens such as bacteria or yeast, or debris such as dead cells and fat deposits in arteries (Khalil et al. 2006).

Absorptive. Absorptive endocytosis molecules are bound to the cell surface and concentrated before internalization, with the molecules interacting preferentially with generic complementary binding sites, such as lectin or charged interaction (Khalil et al. 2006).

There are at least four morphologically distinct pinocytic pathways: macropinocytosis, caveolar endocytosis, clathrin-mediated endocytosis, and clathrin/caveole-independent endocystosis. These four pathways differ in composition of the coat (if any), the size of the membrane-bound, intracellular vesicles, and the fate of the internalized material (Khalil et al. 2006). A fifth endocytic uptake pathway is phagocytosis, which is described above.

Macropinocytosis. Macropinocytosis is the invagination of the cell membrane to form a large endocytoic vesicles of irregular shape and size, generated by actin-driven envagination of the plasma membrane, with the intracellular vesicle filled with extracellular fluid (and molecules within it) (Khalil et al. 2006). The filling of the pocket occurs in a non-specific manner. The vesicle then travels into the cytosol and fuses with other vesicles such as endosomes and lysosomes. Macropinosomes are large vesicles that can have a diameter of up to 2.5 µm, in contrast to the smaller pinosomes and endocytic (endocytotic) vacuoles that have diameters typcially of 0.1 to 0.9 µm (Pellegrin et al. 2002).

Caveolae-mediated endocytosis. Caveolae are small hydrophobic membrane areas that consist of the protein caveolin-1 with a bilayer enriched in cholesterol and glycolipids. Caveolae typically are described as flask-shape pits in the plasma membrane that resemble the shape of a cave (hence the name caveolae), however they can also be flat, tubular, or detached vesicles (Khalil et al. 2006). Uptake of extracellular molecules is also believed to be specifically mediated via receptors in caveolae. Caveolae are found in many cell types and especially in endothelial cells (Khalil et al. 2006). Potocytosis is a term used for the sequestration and transport of small molecules by caveolae without the merging of an endocytic (or endocytotic) vesicle with endosomes (Khalil et al. 2006; Liu 2003). For example, the uptake of folic acid is believed to involve binding to folate receptors in invaginated caveole, but the caveolae stay attached and the ligand is released from the receptors and 5-methyltetrahydrofolic acid moves acrose the caveolar membrane into the cytosol (Khalil et al. 2006). Becasue caveolar update is believed not to lead to lysosomal degradation, it seems advantageous in terms of DNA delivery for gene delivery strategies (Khalil et al. 2006).

Vesicles selectively concentrate and exclude certain proteins during formation and are not representative of the membrane as a whole. AP2 adaptors are multi-subunit complexes that perform this function at the plasma membrane. The best-understood receptors that are found concentrated in coated vesicles of mammalian cells are the LDL receptor (which removes LDL from circulating blood), the transferrin receptor (which brings ferric ions bound by transferrin into the cell), and certain hormone receptors (such as that for EGF).

At any one moment, about 25 percent of the plasma membrane of a fibroblast is made up of coated pits. As a coated pit has a life of about a minute before it buds into the cell, a fibroblast takes up its surface by this route about once every 50 minutes. Coated vesicles formed from the plasma membrane have a diameter of about 100 nm and a lifetime measured in a few seconds. Once the coat has been shed, the remaining vesicle fuses with endosomes and proceeds down the endocytic pathway. The actual budding-in process, whereby a pit is converted to a vesicle, is carried out by clathrin assisted by a set of cytoplasmic proteins, which includes dynamin and adaptors such as adaptin.

Coated pits and vesicles were first seen in thin sections of tissue in the electron microscope by Thomas Roth and Keith Porter in 1964. The importance of them for the clearance of LDL from blood was discovered by R. G Anderson, Michael S. Brown and Joseph L. Goldstein in 1976. Coated vesicles were first purified by Barbara Pearse, who discovered the clathrin coat molecule, also in 1976.

Retrieved from https://www.newworldencyclopedia.org/p/index.php?title=Endocytosis&oldid=947426
Categories:
Hidden category:
This page was last edited on 19 July 2010, at 01:10.
Content is available under Creative Commons Attribution/Share-Alike License; additional terms may apply. See Terms of Use for details.