Epinephrine or adrenaline (sometimes spelled "epinephrin" or "adrenalin" respectively) is a hormone that is secreted principally by the adrenal medulla in response to physical or mental stress. Epinephrine stimulates a series of actions of the sympathetic nervous system known collectively as the "flight or fight response:" increased heart rate and force of heart contractions, increased blood pressure, breakdown of glycogen into glucose, elevated blood glucose levels, and so forth. In short, it prepares the body for action in perceived emergency situations, boosting the supply of oxygen and energy-giving glucose to the brain and muscles, while leading to suppression of some bodily processes not vital to the response.

Epinephrine is one of two main hormones excreted by the adrenal medulla, the other being norepinephrine (noradrenaline).

Epinephrine is a hormone and a phenethylamine (a naturally occurring amine containing one amino group that is connected to an aromatic ring by a two-carbon chain, -CH2-CH2-). Epinephrine belongs to the class of compounds called catecholamine: a sympathomimetic monoamine derived from the amino acid tyrosine, and in this case, also phenylalanine. Catecholamines are water soluble and are 50 percent bound to plasma proteins, so they circulate in the bloodstream. The most abundant catecholamines are epinephrine (adrenaline), norepinephrine (noradrenaline), and dopamine. Catecholamines as hormones are released by the adrenal glands in situations of stress, such as psychological stress or low blood sugar levels (Hoffman 1999).

Epinephrine is sometimes shortened to epi in medical jargon.

In May 1886 William Bates reported the discovery of a substance produced by the adrenal gland in the New York Medical Journal. Epinephrine was isolated and identified in 1895 by Napoleon Cybulski, a Polish physiologist. The discovery was repeated in 1897 by John Jacob Abel (Aronson 2000).

Jokichi Takamine, a Japanese chemist, discovered the same hormone in 1900, without knowing about the previous discovery (Yamashima 2003, Bennett 1999). It was first artificially synthesized in 1904 by Friedrich Stolz.

Actions in the Body

Epinephrine plays a central role in the short-term stress reaction—the physiological response to threatening, exciting, or environmental stressor conditions such as high noise levels or bright light. When released into the bloodstream from the adrenal medulla, epinephrine binds to multiple receptors and has numerous effects throughout the body. It increases heart rate and stroke volume, dilates the pupils, and constricts arterioles in the skin and gut while dilating arterioles in leg muscles. It elevates the blood sugar level by increasing catalysis of glycogen to glucose in the liver, and at the same time begins the breakdown of lipids in fat cells. Like some other stress hormones, epinephrine has a suppressive effect on the immune system.

Epinephrine is used as a drug to treat cardiac arrest and other cardiac dysrhythmias resulting in diminished or absent cardiac output; its action is to increase peripheral resistance via alpha-stimulated vasoconstriction (narrowing of the lumena—small, central space—of blood vessels), so that blood is shunted to the body's core. This beneficial action comes with a significant negative consequence—increased cardiac irritability—which may lead to additional complications immediately following an otherwise successful resuscitation. Alternatives to this treatment include vasopressin, a powerful antidiuretic, which also increases peripheral vascular resistance leading to blood shunting via vasoconstriction, but without the attendant increase in myocardial irritability.

Because of its suppressive effect on the immune system, epinephrine is used to treat anaphylaxis (severe allergic reaction) and sepsis (immune response to a severe infection). Allergy patients undergoing immunotherapy may receive an epinephrine rinse before the allergen extract is administered, thus reducing the immune response to the administered allergen. It is also used as a bronchodilator for asthma if specific beta2-adrenergic receptor agonists are unavailable or ineffective. Adverse reactions to epinephrine include palpitations, tachycardia, anxiety, headache, tremor, hypertension, and acute pulmonary edema.

The sympathetic nervous system, acting via splanchnic nerves to the adrenal medulla, stimulates the release of epinephrine. Acetylcholine released by preganglionic sympathetic fibers of these nerves acts on nicotinic acetylcholine receptors, causing cell depolarization and an influx of calcium through voltage-gated calcium channels. Calcium triggers the exocytosis of chromaffin granules and thus the release of epinephrine (and norepinephrine) into the bloodstream.

Unlike many other hormones, epinephrine (and catecholamines in general) does not exert any negative feedback to down-regulate their own synthesis.

A pheochromocytoma is a tumor of the adrenal gland (or, rarely, the ganglia of the sympathetic nervous system), which results in the uncontrolled secretion of catecholamines, usually epinephrine. 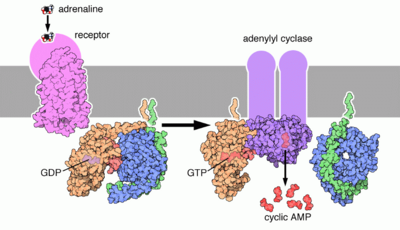 Thus, depending on the patient, administration of epinephrine may raise or lower blood pressure, depending whether or not the net increase or decrease in peripheral resistance can balance the positive inotropic and chronotropic effects of epinephrine on the heart, effects which respectively increase the contractility and rate of the heart.

As noted above, in liver cells, epinephrine binds to β-adrenergic receptors, which change conformation and help Gs, a G protein, exchange GDP to GTP. This trimeric G protein dissociates to Gs alpha and Gs beta/gamma subunits. Gs alpha binds to adenyl cyclase thus converting ATP into cyclic AMP. Cyclic AMP binds to the regulatory subunit of Protein Kinase A. Meanwhile, Gs beta/gamma binds to the calcium channel and allows calcium ions to enter the cytoplasm. Calcium ions bind to calmodulin proteins, a protein present in all eukaryotic cells, which then binds tp Phosphorylase Kinase and finishes its activation. Phosphorylase Kinase phosphorylates Phosphorylase, which then phosphorylates glycogen and converts it to glucose-6-phosphate.

Epinephrine is synthesized from norepinephrine in a synthetic pathway shared by all catecholamines.

Epinephrine is synthesized via methylation of the primary distal amine of norepinephrine by phenylethanolamine N-methyltransferase (PNMT) in the cytosol of adrenergic neurons and cells of the adrenal medulla (so-called chromaffin cells). PNMT is only found in the cytosol of cells of adrenal medullary cells. PNMT uses S-adenosylmethionine (SAMe) as a cofactor to donate the methyl group to norepinephrine, creating epinephrine.

For norepinephrine to be acted upon by PNMT in the cytosol, it must first be shipped out of granules of the chromaffin cells. This may occur via the catecholamine-H+ exchanger VMAT1. VMAT1 is also responsible for transporting newly synthesized epinephrine from the cytosol back into chromaffin granules in preparation for release.