This article discusses the bodily organ. For the herb genus Thymus, see Thyme.

In zoology, the thymus is an organ located in the upper chest (thorax) or neck of all extant vertebrate groups: fish (including Chondrichthyes), amphibians, reptiles, birds, and mammals. In human anatomy, the thymus is located in the anterior portion of the chest cavity, between the breastbone and the heart. The thymus is of central importance in the maturation of T cells (T lymphocytes). T cells are lymphocytes (a class of white blood cells) that play a central role in the adaptive immune system, and specifically in the cell-mediated immune system.

The thymus involves complex coordination of a number of processes. Diverse immature T cells (thymocytes) are produced in the outer layer (cortex) from stem cells and are positively selected for those that are functionally capable of recognizing antigens, with some destroying invaders and others assisting B lymphocytes (B cells) in producing antibodies. They then undergo an intrathymic migration to the inner thymus (medulla) and are negatively selected, based on the specificity of their T cell receptors, eliminating those that are not functional and are autoreactive. The T cells then are involved in a number of complex processes related to their immune system function, all harmoniously coordinated.

Present in most vertebrates, the thymus has a similar structure and function as the human thymus. Some animals have multiple secondary (smaller) thymi in the neck. This phenomenon has been reported for mice (Terszowski et al. 2006) and also occurs in 5 out of 6 human fetuses (Pearson 2006)

When animal thymic tissue is sold in a butcher shop or at a meat counter, thymus is known as sweetbread. In general, sweetbread is the name of a dish made of the animal's brain, pancreas (belly/stomach/heart sweetbread), or thymus gland (neck/throat/gullet sweetbread) of an animal younger than one year old. These animals are usually lambs or calves.

Due to the large numbers of apoptotic lymphocytes (programmed cell death), the thymus was originally dismissed as a "lymphocyte graveyard," without functional importance. The importance of the thymus in the immune system was discovered by Jacques Miller, by surgically removing the thymus from three day old mice, and observing the subsequent deficiency in a lymphocyte population, subsequently named T cells after the thymus, since it is the principal organ for their development (Miller 2004). Recently advances in immunology have allowed the fine dissection of the function of the thymus in T cell maturation.

In humans, the thymus is of a pinkish-gray color, soft, and lobulated on its surfaces. At birth, it is about 5 cm in length, 4 cm in breadth, and about 6 mm in thickness. The organ enlarges during childhood and atrophies at puberty.

The thymus will, if examined when its growth is most active, be found to consist of two lateral lobes placed in close contact along the middle line, situated partly in the thorax, partly in the neck, and extending from the fourth costal cartilage upward, as high as the lower border of the thyroid gland. It is covered by the sternum, and by the origins of the sternohyoidei and sternothyreoidei muscles. Below, it rests upon the pericardium (double-walled sac that contains the heart and the roots of the great vessels), being separated from the aortic arch and great vessels by a layer of fascia (specialized connective tissue. In the neck, it lies on the front and sides of the trachea, behind the sternohyoidei and sternothyreoidei.

The two lobes generally differ in size; they are occasionally united, so as to form a single mass, and sometimes separated by an intermediate lobe. 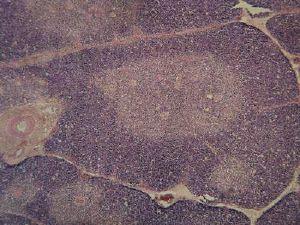 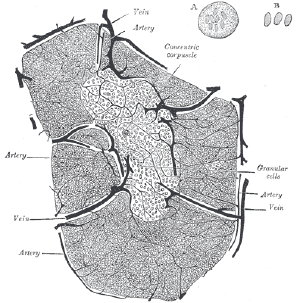 Each lateral lobe is composed of numerous lobules (projecting parts) held together by delicate areolar tissue; the entire gland being enclosed in an investing capsule of a similar but denser structure. The primary lobules vary in size from that of a pin's head to that of a small pea, and are made up of a number of small nodules (small aggregation of cells) or follicles (small spherical group of cells containing a cavity). The follicles are irregular in shape and are more or less fused together, especially toward the interior of the gland. Each follicle is from 1 to 2 mm in diameter and consists of a medullary and a cortical portion, and these differ in many essential particulars from each other.

The cortex or cortical portion (outermost layer) is mainly composed of lymphoid cells, supported by a network of finely-branched epithelial reticular cells, which is continuous with a similar network in the medullary portion. This network forms an adventitia (outermost connective tissue covering) to the blood vessels.

The cortex is the location of the earliest events in the development of thymocytes (T cell precursors), where T cell receptor gene rearrangement and positive selection (see function below) takes place. Thymocytes develop in the cortex and then undergo intrathymic migration from the peripheral cotrex to the inner medullary portion, where they can enter the circulating lymph and blood system.

In the medullary portion (inner layer), the reticulum is coarser than in the cortex, the lymphoid cells are relatively fewer in number, and there are found peculiar nest-like bodies, the concentric corpuscles of Hassall. These concentric corpuscles are composed of a central mass, consisting of one or more granular cells, and of a capsule formed of epithelioid cells. They are the remains of the epithelial tubes, which grow out from the third branchial pouches of the embryo to form the thymus. Each follicle is surrounded by a vascular plexus, from which vessels pass into the interior, and radiate from the periphery toward the center, forming a second zone just within the margin of the medullary portion. In the center of the medullary portion there are very few vessels, and they are of minute size.

The medulla is the location of the latter events in thymocyte development. Thymocytes that reach the medulla have already successfully undergone T cell receptor gene rearrangement and positive selection, and have been exposed to a limited degree of negative selection (see function below). The medulla is specialized to allow thymocytes to undergo additional rounds of negative selection to remove auto-reactive T cells from the mature repertoire. The gene AIRE (autoimmune regulator) is expressed in the medulla, and drives the transcription of organ-specific genes, such as insulin to allow maturing thymocytes to be exposed to a more complex set of self-antigens than is present in the cortex.

The veins end in the left innominate vein, and in the thyroid veins.

The nerves are exceedingly minute; they are derived from the vagi and sympathetic nervous system. Branches from the descendens hypoglossi and phrenic reach the investing capsule, but do not penetrate into the substance of the gland.

In the two thymic lobes, lymphocyte precursors from the bone-marrow become thymocytes (T cell precursors), and subsequently mature into T cells. Once mature, T cells emigrate from the thymus and constitute the peripheral T cell repertoire responsible for directing many facets of the adaptive immune system. Loss of the thymus at an early age through genetic mutation or surgical removal results in severe immunodeficiency and a high susceptibility to infection (Miller 2002).

The generation of T cells expressing distinct T cell receptors occurs within the thymus, and can be conceptually divided into three phases:

Cells that pass both levels of selection are released into the bloodstream to perform vital immune functions.

The two main components of the thymus, the lymphoid thymocytes and the thymic epithelial cells, have distinct developmental origins. The thymic [[epithelium] is the first to develop, and appears in the form of two flask-shape endodermal diverticula, which arise, one on either side, from the third branchial pouch (pharyngeal pouch), and extend lateralward and backward into the surrounding mesoderm and neural crest-derived mesenchyme in front of the ventral aorta.

Here they meet and become joined to one another by connective tissue, but there is never any fusion of the thymus tissue proper. The pharyngeal opening of each diverticulum is soon obliterated, but the neck of the flask persists for some time as a cellular cord. By further proliferation of the cells lining the flask, buds of cells are formed, which become surrounded and isolated by the invading mesoderm. Additional portions of thymus tissue are sometimes developed from the fourth branchial pouches.

During the late stages of the development of the thymic epithelium, hematopoietic lymphoid cells from bone-marrow precursors immigrate into the thymus and are aggregated to form lymphoid follicles.

The thymus continues to grow between birth and puberty and then begins to atrophy, a process directed by the high levels of circulating sex hormones. Proportional to thymic size, thymic activity (T cell output) is most active before puberty. Upon atrophy, the size and activity are dramatically reduced, and the organ is primarily replaced with fat (a phenomenon known as "involution"). The atrophy is due to the increased circulating level of sex hormones, and chemical or physical castration of an adult results in the thymus increasing in size and activity (Sutherland 2005).

Two primary forms of tumors originate in the thymus.

Tumous originating from the thymic epithelial cells are called thymomas and are found in about 25-50 percent of patients with myasthenia gravis. Symptoms are sometimes confused with bronchitis or a strong cough because the tumor presses on the cough nerve. All thymomas are potentially cancerous, but they can vary a great deal. Some grow very slowly. Others grow rapidly and can spread to surrounding tissues. Treatment of thymomas often requires surgery to remove the entire thymus gland.

Tumors originating from the thymocytes are called thymic lymphomas.

Thymosin alpha 1, a natural active ingredient of the thymus gland, have been used for a number of years in cancer treatment in order to strengthen the bodies immune system. Thmosine alpha 1 has been tested and registered by SciClone in many countries around the world. But also an increasing number of manufacturers in Europe offer thymus extracts for all different kind of diseases. Currently, a variety of other active ingredients of the thymus gland are being tested in terms of their efficacy, such as thymosine beta 4, thmostimuline, and so forth.