The Chondrichthyes or cartilaginous fishes are a major class of jawed fish that includes the sharks, rays, and skates, and whose skeleton is characterized by rubbery cartilage, which is very light and flexible, rather than bone, as in the bony fishes (class Osteichthyes (such as cod or salmon)). The chondrichthyans have jaws, paired fins, paired nostrils, scales, and two-chambered hearts.

The taxonomy of Chondrichthyes reveals both the connectedness of living organisms and the diversity in nature. The Chondrichthyes, because of sharing common origin, all share particular features. However, at the same time, they reveal a great diversity in forms, from the fusiform great white shark, hammerhead shark and sawfishes, to the flattened, disc-like stingrays and skates, to the electric rays with powerful electrical organs. This diversity helps to add to the wonder and beauty of creation experienced by humans.

Chondrichthyes is divided into two subclasses: Elasmobranchii (sharks, rays, and skates) and Holocephali (chimaera, sometimes called ghost sharks). The extant (living) elasmobranchs are sometimes divided into two superorders, Selachimorpha (sharks) and Batoidea (rays, skates, sawfish). Nelson (1994) notes that there is growing acceptance of the view that sharks and rays form a monophyletic group (superorder Euselachii), and that sharks without rays are a paraphyletic group. 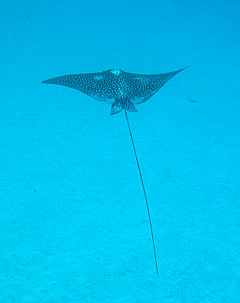 As fish, members of Chondrichthyes are poikilothermic (cold-blooded), water dwelling vertebrates with gills throughout life, and limbs in the form of fins. Poikilothermic refers to the fact that the internal temperatures of fish vary, often matching the ambient temperature of the environment.

Chondrichthyans are characterized by a cartilaginous skeleton. The cartilage is often partly calcified (mineralized with calcium, making it harder and more bone-like, but it is seldom if ever ossified (Nelson 1994). There is bone reported in the vertebrae of Scyliorhinus canicula (Nelson 1994).

Both swim bladder and lungs are absent in members of Chondrichthyes. Condrichthyans have digestive systems with intestinal spiral valves, and with the exception of Holocephali, they also have a cloaca. A spiracle is found behind each eye on most species.

As they do not have bone marrow, red blood cells are produced in the spleen and special tissue around the gonads. They are also produced in an organ called Leydig's Organ, which is only found in cartilaginous fishes, although some lack it. Another unique organ is the epigonal organ, which probably has a role in the immune system. The subclass Holocephali, which is a very specialized group, lacks both of these organs.

In the history of the class, the pectoral and pelvic girdles, which do not contain any dermal elements, were considered to originally not be connected. In later forms, each pair of fins became ventrally connected in the middle when scapulocoracoid and pubioischiadic bars developed. In rays, the pectoral fins have connected to the head and are very flexible.

The tough skin of chondrichthyans is covered with dermal teeth. Holocephali is an exception, as the teeth are lost in adults, and only kept on the clasping organ seen on the front of the male's head. These teeth, also called placoid scales or dermal denticles, making the skin feel like sandpaper.

The oral teeth are usually not fused to the jaws, but are replaced serially (Nelson 1994). It typically is assumed that their oral teeth evolved from dermal denticles that migrated into the mouth, but it could be the other way around as the teleost bony fish, Denticeps clupeoides, has most of its head covered by dermal teeth (as do probably Atherion elymus, another bony fish). This is most probably a secondary evolved characteristic, which means there is not necessarily a connection between the teeth and the original dermal scales. The old placoderms did not have teeth at all, but had sharp bony plates in their mouth.

Modern forms practice internal fertilization, with males with pelvic claspers that are inserted into the female cloaca and oviducts (Nelson 1994). The embryo is encapsulated in a leather-like case and gestation periods of up to two years are known, which is longer than any vertebrate (Nelson 1994).

Animals from this group have a brain weight relative to body size that comes close to that of mammals, and is about ten times that of bony fishes. There are exceptions: the mormyrid bony fish have a relative brain size comparable to humans, while the primitive megamouth shark has a brain of only 0.002 percent of its body weight. One of the explanations for their relatively large brains is that the density of nerve cells is much lower than in the brains of bony fishes, making the brain less energy demanding and allowing it to be bigger.

In turn, Chondrichthyes is divided into the two subclasses of Elasmobranchii (sharks, rays, and skates) and Holocephali (chimaera).