Idealized body plan of the Agnatha.

Agnatha (Greek, "no jaws"), often considered a superclass within the subphylum Vertebrata, comprises the jawless fish—the oldest known vertebrates. The two extant groups of jawless fish (sometimes called cyclostomes) are the lampreys and the hagfish. They are descendants of extinct armored agnathans that were once widespread and were the precursors also of the "jawed vertebrates," which includes the bony fish, tetrapods, and humans.

Both hagfish and lamprey lack scales and plates and have slimy skin. They are ectothermic or cold blooded, do not have to warm themselves through eating, have a slow metabolism, and have to eat relatively small quantities of food.

Agnathans or cyclostomes are differentiated from the "jawed vertebrates"—the gnathostomes (superclass Gnathostomata)—by their characteristic absence of jaws derived from gill arches (bony or cartilaginous supports for the gills). In terms of number of extant species and absolute numbers of living representatives, the agnathans comprise a very minor segment of the animal world in comparison with the jawed vertebrates, which include fish with hinged jaws, amphibians, reptiles, birds, and mammals.

The fossil record contains probable agnathan remains from the middle Cambrian, roughly 525-520 million years ago (mya), with the first armored agnathans appearing in the Middle Ordovician about 475 mya and a subsequent radiation of their descendants into diverse body types. The jawless fish themselves reached their peak by the Late Silurian (about 420 mya) and then declined precipitously during the Devonian (416-359 mya), while their many descendant species went on to populate the land and the seas.

Hagfish, while generally classified in Agnatha and in the subphylum Vertebrata, actually lack vertebrae. For this reason, they sometimes are separated from the vertebrates. Janvier (1981) and a number of others, for example, put hagfish into a separate subphylum, Myxini, which then is paired with the subphylum Vertebrata to comprise the taxon Craniata, which recognizes the common possession of a cranium (Janvier 1981). Others, however, use the terms Vertebrata and Craniata as synonyms, rather than as different levels of classification, and retain the use of Agnatha as a superclass (Nelson 1994).

The other living member of Agnatha, the lamprey, has primitive vertebrae made of cartilage.

Agnatha generally is considered to be a paraphyletic group because it doesn't include all of the early agnathans' presumed descendents (the jawed vertebrates). Similarities between hagfish and lampreys appear to involve superficial or primitive characteristics that cannot support a hypothesis for a group composed of only hagfish and lampreys as a monophyletic group (Nelson 1994). On the other hand, there are a number of morphological and physiological similarities shared between lampreys and gnathostomes, but not by hagfishes, that appear to be due to common ancestry, such as vertebral elements, highly differentiated kidney tubules, more than one semicircular canal, large exocrine pancreas, and so forth (Nelson 1994).

Yalden (1985), however, does present an argument based on feeding mechanisms that hagfishes and lampreys do constitute a monophyletic grouping. And Delarbrea et. al. (2002), using the complete mitochondrial DNA of a hagfish species compared to that of other sequences, found such an approach "unequivocally supported the monophyly of cyclostomes [the agnathans]" and that this molecular data and that obtained from nuclear genes, leads to the conclusion that "hagfishes and lampreys form a clade."

There are about 12 genera and 84 species recognized in the Agnatha (Nelson 1994).

Members of Agnatha are characterized by the absence of jaws derived from gill arches, although hagfish and some fossil forms do have another type of biting apparatus that is not considered to have been derived from gill arches (Nelson 1994). Other common characteristics of Agnatha that distinguish them from the jawed fish include the absence of paired fins, the absence of pelvic fins, the presence of a notochord both in larvae and adults, and seven or more paired gill pouches. There is a lack of a vertebral centrum (a thick disk-shaped part of each vertebra), the presence of one or two vertical semicircular canals, the covering of the gills with endoderm, the gills' internal direction, the gills' openings to the surface being through pores rather than slits, and the gills' supportive arch skeleton being fused with neurocranium (Nelson 1994). The bronchial arches supporting the gill pouches lie close to the body surface. There is a light sensitive pineal eye (homologous to the pineal gland in mammals).

All living and most extinct agnathans do not have an identifiable stomach or any paired appendages, although the hagfish and lampreys do have a tail and a caudal fin. Both hagfish and lamprey have slimy skin without scales or plates. Some extinct agnathans reveal thick body plates. The internal skeleton of the Agnatha is not bony but rather cartilaginous (made up of dense connective tissue).

As characteristic of the class, hagfish and lampreys have a notochord that remains throughout life. This notochord is the first primitive vertebral column. In the extant agnathans, fertilization and development are both external, and there is no parental care. The lampreys and hagfish have circular, jawless mouths and unpaired fins. They are ectothermic, with a cartilaginous skeleton, and the heart contains two chambers. Being ectothermic or cold blooded, they do not have to warm themselves through eating. Therefore, their metabolism is slow as well and they do not have to eat as much.

Although lampreys and hagfish are superficially similar, many of these similarities are probably shared primitive characteristics of ancient vertebrates. Thus, modern classifications tend to place hagfish into a separate group (such as the Myxini or Hyperotreti), with the lampreys (Hyperoartii) being more closely related to the jawed fishes.

Extant hagfish are placed in the family Myxinidae within the order Myxiniformes (or Hyperotreti) or subphylum Myxini. They have a scaleless, eel-like body without paired fins. Members of the order Myxiniformes are characterized by one semicircular canal, absence of eye musculature, a single olfactory capsule with few folds in the sensory epithelium, no bone, and 1 to 16 pairs of external gill openings (Nelson 1994). Members of the family Myxinidae are characterized by the lack of a dorsal fin, barbels present around the mouth, degenerate eyes, teeth only on the tongue, no metamorphosis, and ovaries and testes in the same individual but only one functional gonad (Nelson 1994). Sometimes known as "slime eels," they are a staple food in Korea.

Hagfish are found in marine environments and are scavengers that mostly eat the insides of dying or dead fish and invertebrates (Nelson 1994). They are unique in being the only vertebrate in which the body fluids are isosmotic with seawater (Nelson 1994).

The extant lampreys, placed in the family Petromyzontidae of the order Petromyzontiformes (Hyperoartii), are characterized by a primitive vertebrae made of cartilage and several other features that separate them from hagfish: one or two dorsal fins, well developed eyes in adults, teeth on both the oral disc and tongue (although not fossil forms), absence of barbels, separate sexes, and a larval stage that undergoes a radical metamorphosis in freshwater (Nelson 1994). Like the hagfish, they have a slimy skin without scales, unpaired fins, a notochord that is retained by the adult, and a circular, jawless mouth.

Lampreys are found in both freshwater and ocean environments, being anadromous (living mostly in the oceans but returning to freshwater to breed). Most are parasitic. Because lampreys resemble eels in external appearance, they sometimes are called lamprey eels, but otherwise are not closely related to the eels, which are part of the jawed, bony fish. 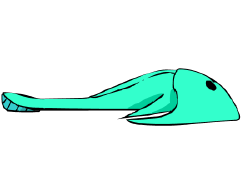 Although a minor element of modern marine fauna, agnathans were prominent among the fish in the early Paleozoic. Possible remains of agnathans are found in the fossil record dating to the Late Cambrian and definitive agnathan remains occur in the middle Ordovician (Nelson 1994). The Silurian and Lower Devonian showed the greatest radiation in forms (Nelson 1994).

Two types of fish apparently having fins, vertebrate musculature, and gills are known from the Early Cambrian Maotianshan shales of China: Haikouichthys and Myllokunmingia. They have been tentatively assigned to Agnatha by Janvier (2003). A third possible agnathan from the same region is Haikouella. A possible agnathan that has not been formally described was reported by Simonetti from the Middle Cambrian Burgess Shale of British Columbia.

Many Ordovician, Silurian, and Devonian agnathans were armored with heavy bony-spiky plates. The first armored agnathans—the Ostracoderms, precursors to the bony fish and hence to the tetrapods (including humans)—are known from the Middle Ordovician, and by the Late Silurian the agnathans had reached the high point of their evolution. Agnathans declined in the Devonian and never recovered.

Retrieved from https://www.newworldencyclopedia.org/p/index.php?title=Agnatha&oldid=1018013
Categories:
Hidden category:
This page was last edited on 9 February 2019, at 16:11.
Content is available under Creative Commons Attribution/Share-Alike License; additional terms may apply. See Terms of Use for details.