Agnes Robertson Moorehead (December 6, 1900 – April 30, 1974) was a versatile American actress who won acclaim in radio, film, television and in theater.

She was involved in two of the most famous and well-received radio shows of all time, Sorry Wrong Number, which earned her the Golden Mike Award, as well as a Golden Record, and War of the Worlds.

A testament to her long and successful career were her two Golden Globe Awards for Best Actress in a Supporting Role that were twenty years apart: 1944 for Mrs. Parkington and 1964 for Hush...Hush, Sweet Charlotte. She was also nominated four times for Academy Awards between 1943 and 1965; was a seven time Emmy Award nominee (winning once for a supporting role in Wild Wild West); and won the New York Film Critics Circle Award for Best Actress in Magnificent Ambersons in 1942.

In 1950 Agnes joined Charles Boyer, Charles Laughton, and Sir Cedric Hardwicke in Paul Gregory's acclaimed stage production of Shaw's Don Juan In Hell. She also had her own popular one woman show called The Fabulous Redhead.

Although she appeared in more than 70 films and on dozens of television shows during a career that spanned more than 30 years, Moorehead is probably most widely known to modern audiences for her role as the witch Endora in the television series Bewitched.

The actress was a Christian who left her Ohio estate, Moorehead Manor, as well as some biblical studies books from her personal library, to Bob Jones University, a Christian liberal arts school in Greenville, South Carolina.

Moorehead was born on December 6, 1900, in Clinton, Massachusetts of English, Irish, Scottish and Welsh ancestry, to a Presbyterian minister, John Henderson Moorehead, and his wife, Mildred McCauley, a former singer.

She later shaved six years off her age by claiming to have been born in 1906. Moorehead recalled her first public performance was at the age of three, reciting The Lord's Prayer in her father's church. The family moved to St. Louis, Missouri and Moorehead's ambition to become an actress began to develop. Her mother indulged her active imagination often asking "Who are you today, Agnes?," while Moorehead and her sister would often engage in mimicry, coming to the dinner table and imitating parishioners. Moorehead rarely spoke of her younger sister Margaret, who died when both were children, and was often thought of as an only child.[1] Moorehead noted and was encouraged by her father's amused reactions. She joined the chorus of the St. Louis Municipal Opera Company, known as The Muny. In addition to her interest in acting, she developed a lifelong interest in religion; in later years actors such as Dick Sargent would recall Moorehead arriving on the set with "the Bible in one hand and the script in the other.[1]

She graduated from Central High School in 1918. Although her father did not discourage Moorehead's acting ambitions, he insisted that she obtain a formal education. Moorehead earned a bachelor's degree, with a major in biology, from Muskingum College in New Concord, Ohio in 1923, and while there also appeared in college stage plays.

She later received an honorary doctorate in literature from Muskingum, and served for a year on its board of trustees. When her family moved to Reedsburg, Wisconsin, she taught public school for five years in Soldiers Grove, Wisconsin, while earning a master's degree in English and public speaking at the University of Wisconsin in Madison. She then pursued post-graduate studies at the American Academy of Dramatic Arts, from which she graduated with honors in 1929. Although Moorehead's New York Times death notice (May 1, 1974) states that she attained a doctoral degree from Bradley University, in fact Bradley University did not offer doctoral degrees in literature at the time. Moorehead received an honorary doctoral degree from Bradley University.

Moorehead's early career was unsteady, and although she was able to find stage work she was often unemployed. She later recalled going four days without food, and said that it had taught her the value of a dollar. She found work in radio, and was soon in demand, often working on several programs in a single day. She believed that it offered her excellent training and allowed her to develop her voice to create a variety of characterizations. At this time Moorehead met the actress Helen Hayes, who encouraged her to try to enter films, but her first attempts were met with failure. Rejected as not being the right type, Moorehead returned to radio. 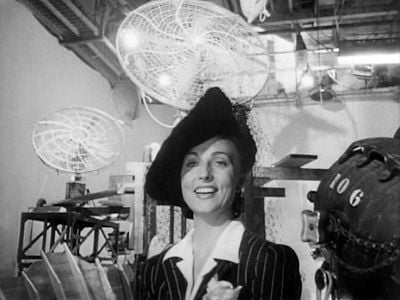 She then met Orson Welles and by 1937 was a member of his Mercury Theater Group, along with Joseph Cotten. She appeared in his radio production Julius Caesar, had a regular role in the serial The Shadow and was one of the players in his The War of the Worlds production. In 1939, Welles moved the Mercury Theater Group to Hollywood, where he started working for RKO Studios. Several of his radio performers joined him, and Moorehead made her film debut as his mother in Citizen Kane (1941). She also appeared in his films Journey into Fear (1943) and The Magnificent Ambersons (1942). She received a New York Film Critics Award and an Academy Award nomination for her performance in the latter film. 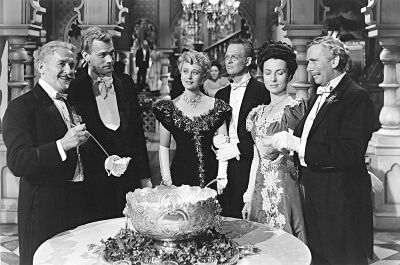 Moorehead played another strong role in The Big Street (1942) with Henry Fonda and Lucille Ball, and then appeared in two films that failed to find an audience, Government Girl with Olivia de Havilland and The Youngest Profession with Virginia Weidler.

By the mid 1940s, Moorehead joined MGM, negotiating a $6,000 a week contract with the provision to also perform on radio, an unusual clause at the time. Moorehead explained that MGM usually refused to allow their actors to play on radio as "the actors didn't have the knowledge or the taste of the judgment to appear on the right sort of show."[1]

She portrayed puritanical matrons, neurotic spinsters, possessive mothers, and comical secretaries throughout her career. Moorehead was part of Orson Welles' Mercury Theatre on the Air radio program in the 1930s and appeared in Broadway productions of Don Juan in Hell in 1951-1952, and Lord Pengo in 1962-1963. She played Parthy Hawks, wife of Cap'n Andy and mother of Magnolia, in MGM's hit 1951 remake of Show Boat. She was in many important films, including Dark Passage and Since You Went Away, either playing key small or large supporting parts.

During the 1940s and 1950s, she was one of the most in demand actresses for radio dramas, and in 1943 starred in the legendary Suspense play Sorry, Wrong Number, written by Lucille Fletcher. Moorehead played a selfish, neurotic woman who overhears a murder being plotted via crossed phone wires who eventually realizes she is the intended victim. She recreated the performance many times on the radio (always using her original, dog-eared script), recorded an album of the drama in 1952, and performed scenes from the story in her one-woman show in the 1950s. Moorehead from the trailer for Johnny Belinda (1948)

Sorry, Wrong Number also inspired writers of the television series The Twilight Zone to script an episode with Moorehead in mind.[2] In The Invaders (broadcast January 27, 1961) Moorehead played a woman whose isolated farm is plagued by mysterious intruders. In Sorry, Wrong Number Moorehead offered a famed, bravura performance using only her voice, and for The Invaders she was offered a script where she had no dialog at all. 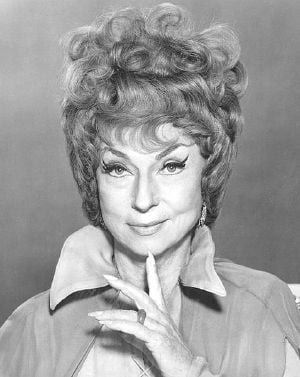 Agnes Moorehead as Endora from the television program Bewitched

In 1964, Moorehead accepted the role of Endora, in the situation comedy Bewitched. She later commented that she had not expected it to succeed and that she ultimately felt trapped by its success, however she had negotiated that she would appear in only eight of every twelve episodes made, therefore allowing her sufficient time to pursue other projects. She also felt that the television writing was often below standard and dismissed many of the Bewitched scripts as "hack" in a 1965 interview. The role brought her a level of recognition that she had not received before as Bewitched was in the top ten programs for the first few years it screened.

Moorehead received six Emmy Award nominations, but was quick to remind interviewers that she had enjoyed a long and distinguished career. Despite her ambivalence, she remained with Bewitched until its run ended in 1972. She commented to the New York Times in 1974, I've been in movies and played theater from coast to coast, so I was quite well known before Bewitched, and I don't particularly want to be identified as a witch. Later that year she said that had enjoyed playing the role, but that it was not challenging and the show itself was not breathtaking.

Moorehead married actor John Griffith Lee in 1930, and they divorced in 1952. Moorehead and Lee adopted an orphan named Sean in 1949. In 1954, she married actor Robert Gist, and they divorced in 1958. In the years since her death, rumors about Moorehead's being a lesbian have been widespread (most notoriously in the book Hollywood Lesbians by Boze Hadleigh, whose source for the alleged lesbianism was Paul Lynde).[3] However, Moorehead biographer Charles Transberg interviewed several of the actress's closest friends, including some who are openly gay, who all stated the rumor is untrue.[4] Debbie Reynolds explicitly denied to film historian Robert Osborne that her best friend Moorehead was gay.[5]

Moorehead was a devout Presbyterian (Reynolds described her as terribly religious) and, in interviews, often spoke of her relationship with God. Erin Murphy stated that the actress would read Bible stories to the children affiliated with Bewitched.[5] Shortly before her death, Moorehead, who embraced her Reformed Calvinist roots, sought conservative causes to bequest her estate. This angered some of her Hollywood colleagues and has been postulated as the reason for the rumors of lesbianism.

Agnes Moorehead died of uterine cancer in Rochester, Minnesota on April 30, 1974, not lung cancer as was long believed. She was 73 years of age.

While never confirmed, some suspect that Moorehead's cancer was a result of having been exposed to radiation at a site previously used for nuclear testing while filming The Conqueror with John Wayne in the state of Utah.[6]

She is interred at Dayton Memorial Park in Dayton, Ohio.

In the years since her death, people have been entertained by her legacy in film, radio, television, and recordings, thanks to television's Nick at Nite, Turner Classic Movies, and other outlets.

Moorehead willed her 1967 Emmy Award statue for The Wild Wild West and her private papers to Muskingum College, including her home in Rix Mills, Ohio.

She left her family's Ohio estate and farmlands, Moorehead Manor, to Bob Jones University, as well as some biblical studies books from her personal library. Her will stipulated that BJU should use the farm for retreats and special meetings with a Christian emphasis, but in May 1976, BJU traded the farmlands with an Ohio college for $25,000 and a collection of her library books.

Moorehead also left her professional papers, scripts, Christmas cards and scrapbooks to the Wisconsin Center for Film and Theater Research at the Wisconsin Historical Society.

In 1994, Agnes Moorehead was inducted into the St. Louis Walk of Fame.

Retrieved from https://www.newworldencyclopedia.org/p/index.php?title=Agnes_Moorehead&oldid=1076664
Categories:
Hidden category:
This page was last edited on 16 August 2022, at 15:43.
Content is available under Creative Commons Attribution/Share-Alike License; additional terms may apply. See Terms of Use for details.