The Academy Awards, popularly known as the Oscars, are the most prominent movie awards in the United States and most watched awards ceremony in the world. In 1927, shortly after the Academy of Motion Picture Arts and Sciences was incorporated, a dinner was held in the Crystal Ballroom of the Biltmore Hotel in downtown Los Angeles to discuss the goals of the new organization. One of those goals was to find a method of honoring outstanding achievements, thereby encouraging higher levels of quality in all areas of motion picture production.

Academy Awards are granted by the Academy of Motion Picture Arts and Sciences, a professional honorary organization, dedicated to the advancement of the arts and science of motion pictures. The original Academy was made up of 36 actors, directors, writers, technicians, producers, and lawyers. While the Academy does not publish a list of members, as of 2012 there was a voting membership of 5,783, with actors making up the largest voting bloc (22 percent) with a membership of 1,311 members. As of 2004, the roster included filmmakers from 36 countries.

Academy membership may be obtained by a competitive nomination (however, the nominee must be invited to join by the Academy's Board Of Governors) or a member may submit a name. The Academy does not publicly disclose its membership, although past press releases have announced the names of those who have been invited to join. If a person not yet a member is nominated in more than one category in a single year, he/she must choose which branch to join when he/she accepts membership.

The nomination ballots are mailed to members of the Academy in December and must be returned within two weeks for their votes to be counted. These secret ballots are returned to PricewaterhouseCoopers, the accounting firm that has tabulated and certified the votes for 72 years, almost since the awards' inception.[1] Once the votes are tabulated, a final list of nominees is announced in January. Another round of secret voting takes place, with members of the Academy only able to vote on the final nominees listed in each category. Those ballots must be returned to PricewaterhouseCoopers within two weeks. After the ballots are tabulated, only two partners of PricewaterhouseCoopers will know the results until the envelopes are opened on stage during the Academy Awards presentation.

The official name of the Oscar statuette is the Academy Award of Merit. Made of gold-plated britannium on a black metal base, it is 13.5 inches (34 cm) tall, weighs 8.5 lb (3.85 kg) and depicts a knight holding a crusader's sword standing on a reel of film with five spokes, signifying the original branches of the Academy: Actors, Writers, Directors, Producers, and Technicians. MGM’s art director Cedric Gibbons, one of the original Academy members, supervised the design of the award trophy by printing the design on scroll. Then sculptor George Stanley sculpted Gibbons' design in clay, and Alex Smith cast the statue in tin and copper and then gold-plated it over a composition of 92.5 percent tin and 7.5 percent copper. The only addition to the Oscar since it was created is a minor streamlining of the base.[2]

The root of the name "Oscar" is contested. One biography of Bette Davis claims that she named the Oscar after her first husband, band leader Harmon Oscar Nelson.[3] The more accepted claim is that of the Academy’s Executive Secretary, Margaret Herrick, who first saw the award in 1931, remarked that the statuette reminded her of her Uncle Oscar.[2] The staff soon began referring to it as "Oscar." By the sixth Awards Presentation in 1934, Hollywood columnist Sidney Skolsky used the name in his column in reference to Katharine Hepburn's first Best Actress win. The Academy itself did not use the nickname officially until 1939.

However it came to be, both "Oscar" and "Academy Award" are registered trademarks of the Academy, and are fiercely protected by the Academy through litigation.

Since 1950, the statuettes have been legally encumbered by the requirement that neither winners nor their heirs may sell the statuettes without first offering to sell them back to the Academy for $1. If a winner refuses to agree to this, then the Academy keeps the statuette.[4] Academy Awards not protected by this agreement have been sold in public auctions and private deals for six figure sums.[2]

Today, according to Rules 2 and 3 of the official Academy Awards Rules, a film has to open in the previous calendar year (from midnight at the start of January 1, to midnight at the end of December 31) in Los Angeles County, California, to qualify.[5] Rule 2 states that a film must be "feature-length" (defined as at least 40 minutes) to qualify for an award (except for Short Subject awards). It must also exist either on a 35mm or 70mm film print or on a 24fps or 48fps progressive scan digital film print with a native resolution no lower than 1280x720.[6]

The members of the various branches nominate those in their respective fields (actors are nominated by the actors' branch, etc.) while all members may submit nominees for Best Picture. The winners are then determined by a second round of voting in which all members are then allowed to vote in all categories.

The first Awards ceremony was held in the Blossom Room of the Hollywood Roosevelt Hotel and the attendance numbered 270, with tickets at $5 each, including a banquet and long speeches. The statuettes were presented by Academy President Douglas Fairbanks. That first year, the award recipients were announced three months earlier. For the next decade, the results were given in advance to newspapers for publication at 11 p.m. on the night of the Awards. Unfortunately in 1940, the Los Angeles Times decided to publish the list of winners in its evening edition, which was available to guests arriving for the affair. As a result, the Academy adopted the sealed-envelope system the next year, and that system remains in use today. 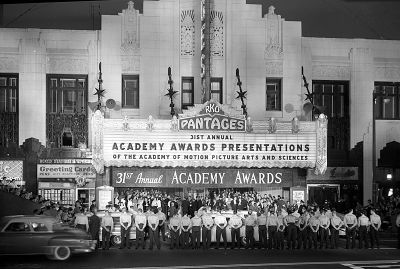 Outside the Pantages Theater at the 31st Academy Awards in 1959

There were fifteen years of banquets, the first at the Hollywood Roosevelt, and the rest at either the Biltmore or the Ambassador Hotels. After the 1942 ceremony, it was decided that the attendance was too large to continue the banquet venue. Also, the war made it impractical. The 16th Awards ceremony was held at Grauman's Chinese Theater, covered by network radio for the first time. The Award ceremony continued at Grauman's for two more years and then moved to the Shrine Civic Auditorium. Two years later, in March 1949, the 21st Awards ceremony took place in the Academy’s own Melrose Avenue theater in Los Angeles. For the next 11 years, the annual Awards were held at the RKO Pantages Theatre in Hollywood. It was there, on March 19, 1953, that the Academy Awards Presentation was first televised.

In 2002, Hollywood's Dolby Theatre (previously known as the Kodak Theatre) became the venue for the awards presentation.

The major awards are given out at a live televised ceremony, most commonly in March following the relevant calendar year, and six weeks after the announcement of the nominees. It begins with the Parade of the Oscars in which students from Inner-City Filmmakers (ICF), a training and film industry job development program, carry the "Oscars" down the red carpet. Then comes the Academy Awards arrivals. This is an elaborate extravaganza, with the invited guests walking up the red carpet in the creations of the most prominent fashion designers of the day. Black tie dress is normally required for men, although fashion may dictate leaving out the bow tie, and musical performers typically don't adhere to this custom (nominees for Best Original Song quite often perform those songs live at the awards ceremony, and the fact that they are performing is often used to promote the television broadcast). The Awards Ceremony is one of the highest viewed events of the year. Then comes the "Backstage" event, an opportunity for the Awards recipients to have their pictures taken with their awards. After the ceremonies is the Governor's Ball, attended by Oscar winners, nominees, telecast participants, and Academy guests.

It is estimated that over one billion people watch the Academy Awards either live or recorded each year.[2] If this is true, few other events outside of the Olympics and FIFA World Cup draw a higher global audience. The Awards show was first televised on NBC in 1953. NBC broadcast them until 1960 when the American Broadcasting Company Network (ABC) took over the broadcasting job until 1971 when NBC regained the broadcast rights. ABC again took over broadcast duties in 1976 and was under contract to do so through the year 2014, extended to 2020, and then extended to 2028.[7]

After more than fifty years of being held in late March or early April, the ceremonies were moved up to late February or early March starting in 2004, to help disrupt and shorten the intense lobbying and ad campaigns associated with Oscar season in the film industry. The earlier date is also of advantage to ABC, as it usually occurs during the highly profitable and important February Nielsen Ratings "Sweeps" period.

The awards event itself is a National Special Security Event by the United States Department of Homeland Security.

Movie studios are strictly prohibited from advertising movies during the broadcast.

Some awards are for a film as a whole, some are for an aspect of a film.

These awards are voted on by special committees, rather than by the Academy membership as a whole.

Did you know?
George Bernard Shaw was awarded the Nobel Prize in Literature and won an Oscar for screenwriting