Jessie Alice Tandy (June 7, 1909 – September 11, 1994) was a British-American actress. Tandy appeared in over 100 stage productions and had more than 60 roles in film and TV, receiving an Academy Award, four Tony Awards, a BAFTA, a Golden Globe Award, and a Primetime Emmy Award. She was an acclaimed stage actress, excelling in both classical and popular productions on the London stage, including various Shakespearean roles, and then became famous for playing Blanche DuBois in the original Broadway production of A Streetcar Named Desire (1948).

Although she was not given leading roles in screen productions for many years, she finally achieved well-deserved recognition for her performances in films like Alfred Hitchcock's The Birds (1963) and Fried Green Tomatoes (1991), as well as several in which she starred with her husband Hume Cronyn, including Cocoon (1985) and *batteries not included (1987). At the age of 80, she became the oldest actress to receive the Academy Award for Best Actress for her role in Driving Miss Daisy (1989). Tandy was dedicated to her craft, never expecting starring roles and considering herself fortunate to have the chance to perform each role.

The youngest of three siblings, Jessica Tandy was born in Geldeston Road in Hackney, London on June 7, 1909, the third child of Harry Tandy and his wife, Jessie Helen Horspool. Her mother was from a large Fenland family in Wisbech, Cambridgeshire, and the head of a school for mentally handicapped children, and her father was a traveling salesman for a rope manufacturer.[1] She was educated at Dame Alice Owen's School in Islington.

Her father died when she was 12, and her mother subsequently taught evening courses to earn an income. Jessica suffered from tuberculosis as a child which limited her school attendance. However, she accompanied her mother to night school and enjoyed studying poetry, dance, calisthenics, and drama. In 1924, at age fifteen, she enrolled at Sir Ben Greet‘s Academy of Acting, the most prestigious training ground for actors at that time. Instructor Lillian E. Simpson nurtured her talent there for three years.[2] After completing her studies, Tandy made her stage début in The Manderson Girls, at London’s Playhouse Six on November 22, 1927.[1] 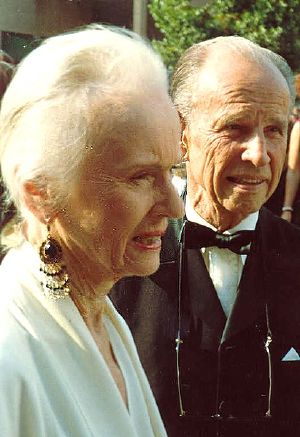 In 1932 Tandy married English actor Jack Hawkins and together they had a daughter, Susan Hawkins, born in 1934. However, they marriage failed and they divorced in 1940.

Tandy married Canadian actor Hume Cronyn in 1942.[3] They had two children, daughter Tandy Cronyn, an actress who co-starred with her mother in the TV film The Story Lady,[4] and son Christopher Cronyn.

Tandy became a naturalized citizen of the US in 1952, and spent much of the ensuing decade collaborating with Cronyn. In addition to ten stage productions, they also appeared together in seven plays for television’s Omnibus series. They remained happily married until her death: "The reason we can live and work together is that in no way do we threaten each other. We’re safe. I can’t play him and he can’t play me."[1]

In 1990, Jessica Tandy was diagnosed with ovarian cancer, and she also suffered from angina and glaucoma. Despite her illnesses and age she continued working. On September 11, 1994, she died at home in Easton, Connecticut, at the age of 85.[5] 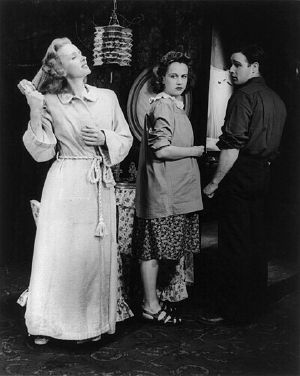 Tandy (left, with Kim Hunter and Marlon Brando) portrayed Blanche in the original 1947 Broadway production of A Streetcar Named Desire, a role that earned her the 1948 Tony Award for Best Actress 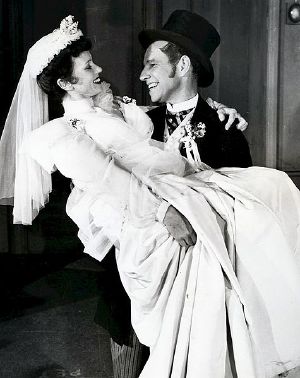 Jessica Tandy and Hume Cronyn in the Broadway play, "The Fourposter," 1952

Tandy was 18 years old when she made her professional debut in The Manderson Girls on the London stage in 1927. During the 1930s, she acted in many plays in London's West End, both popular and classical. She excelled in a number of Shakespearean roles, including Ophelia opposite John Gielgud's legendary Hamlet, as Cordelia to Gielgud's King Lear, and as both Sebastian and Viola opposite Laurence Olivier's Sir Toby Belch in Twelfth Night.[2] During her time as a leading actress on the stage in London, she often had to fight over roles with her two rivals, Peggy Ashcroft and Celia Johnson.[6]

She was cast in her first British film role in The Indiscretions of Eve (1932). Several years later she appeared in Murder in the Family with Roddy McDowall (1938). However, after her marriage to Jack Hawkins began to fail, she moved to the United States hoping to find better roles on both stage and screen. On Broadway, she won a Tony Award for her performance as Blanche Dubois in the original Broadway production of A Streetcar Named Desire in 1948. Hoping for success in movies, she signed a five-year contract with Metro-Goldwyn-Mayer, but was not considered for leading actress roles. She was even overlooked for the role of Blanche DuBois in the screen version of A Streetcar Named Desire; it was given to Vivien Leigh who won an Oscar for her performance.[2]

Tandy made her American film debut in The Seventh Cross (1944). She had supporting appearances in The Valley of Decision (1945), The Green Years (1946, as Cronyn's daughter), Dragonwyck (1946) starring Gene Tierney and Vincent Price and Forever Amber (1947). She appeared as the insomniac murderess in A Woman's Vengeance (1948), a film noir adapted by Aldous Huxley from his short story "The Gioconda Smile."

Broadway restrictions on immigrants limited her possibilities for roles and so she resorted to working in radio. Among other programs, she was a regular on Mandrake the Magician as Princess Nada.[7] During this time she met Hume Cronyn and the two married on September 27, 1942. They performed on radio together in The Marriage from 1953 to 1954.

Over the next three decades, Tandy's film career continued sporadically while she found better roles on the stage. Her roles during this time included The Desert Fox: The Story of Rommel (1951) opposite James Mason, The Light in the Forest (1958), and a role as a domineering mother in Alfred Hitchcock's film, The Birds (1963). 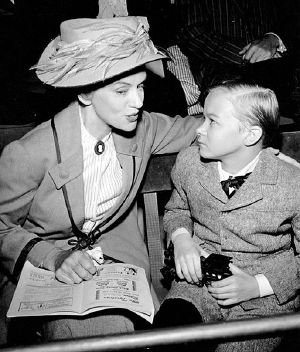 After this, she concentrated on the stage. In 1976, she and Cronyn joined the acting company of the Stratford Festival, and returned in 1980 to debut Cronyn's play Foxfire.[8] In 1977, she earned her second Tony Award, for her performance (with Cronyn) in The Gin Game and her third Tony in 1982 for her performance, again with Cronyn, in Foxfire.

The beginning of the 1980s saw a resurgence in her film career, with character roles in The World According to Garp, Best Friends, Still of the Night (all 1982) and The Bostonians (1984). She and Cronyn were now working together more regularly on stage and television, including the films Cocoon (1985), *batteries not included (1987), Cocoon: The Return (1988), and the Emmy Award winning television film Foxfire (1987), recreating her Tony winning Broadway role. Although she was finally receiving recognition for her work in film, Tandy commented "My parts are never big in films, but that's all right ... Films aren't as satisfying to me as the theater."[1]

However, it was her colorful performance in Driving Miss Daisy (1989), as an aging, stubborn Southern Jewish matron, that earned her an Oscar at the age of 80.[9]

Despite illnesses and age she continued working, her performances reflecting her ability and her dedication to her craft: "She was the consummate professional - a steel magnolia who provided the most genteel illusion."[10] She received a Best Supporting Actress nomination for her work in the grassroots hit Fried Green Tomatoes (1991) and co-starred in The Story Lady (1991 TV film, with her daughter Tandy Cronyn), Used People (1992, as Shirley MacLaine's mother), television film To Dance with the White Dog (1993, with Cronyn), Camilla (1994, with Cronyn). Nobody's Fool (1994) proved to be her last performance, at the age of 84.

Jessica Tandy's stage career spanned six decades, during which she gave legendary performances in plays by Tennessee Williams, Edward Albee, and Samuel Beckett. Her power on stage was "couched in gentility," appearing to be a thin and frail actress but even her whispers could be heard in every seat in the theater.[10] Her most famous role was that of the heroine, Blanche Dubois, in A Streetcar Named Desire. For this she was regarded as one of the finest actresses of her generation, acclaimed by critics, including Brooks Atkinson of The New York Times who called her performance the "perfect marriage of acting and playwriting."[2]

However, she waited decades for similar recognition on the screen, through no fault of her own: "Not that there were ever any failures on her part, it was simply put that, for many years, producers couldn't imagine Tandy as the star of a major Hollywood movie."[11] This did not cause Tandy to despair, partly because her first love was the stage, and partly because she did not consider it her right to have any role, but rather a privilege: "fortunate experiences that a kind fate had allowed her to possess.[10]

Interestingly, given that her roles in film for decades were small parts, "primarily in character roles, often as the unfortunately plan 'other' girl, or conniving villainesses," as "Hollywood never thought she was pretty enough to be a star,"[10] Tandy was chosen by People magazine as one of the 50 Most Beautiful People in the world in 1990.[12]

Other awards and honors given to Tandy include:

Retrieved from https://www.newworldencyclopedia.org/p/index.php?title=Jessica_Tandy&oldid=1088272
Categories:
Hidden category:
This page was last edited on 19 November 2022, at 20:21.
Content is available under Creative Commons Attribution/Share-Alike License; additional terms may apply. See Terms of Use for details.