Saint Agnes (291–304 C.E.) was a virgin martyr and saint of the Christian church. Also known as Saint Agnes of Rome and Saint Ines (or Santa Ynez), she is one of seven women, besides the Virgin Mary, commemorated by name in the Roman Missal.

Traditionally, Agnes was martyred for her faith during the persecution of Emperor Diocletian in the late third century C.E. However, some believe she may have died under Decius in a localized persecution half a century before this. The earliest (late fourth century) sources tell little of her life, other than that she was executed as a Christian at age 12 or 13. Later legends add that, before her death, she was forcibly taken to a house of prostitution to secure her dishonor before her martyrdom, but that her virginity was miraculously preserved by an angelic intervention. In like manner, her hair grew wondrously long to cover her nakedness from pagan onlookers at her death scene, and the fire meant to devour her refused to burn.

One of the first examples of virginal espousal to Christ, Agnes became a popular figure in Christian legend in later centuries, and various folk customs and religious traditions are associated with her, along with hundreds of churches, schools, and shrines. Saint Agnes is the patron saint of chastity, girls, gardeners, engaged couples, rape victims, and virgins. She is recognized as a saint in both the Catholic and Orthodox traditions, as well as most other churches that honor saints. Her feast day is celebrated on January 21.

Sources of her story 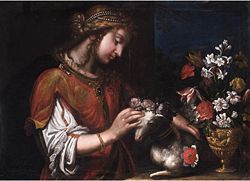 Saint Agnes with the symbols of her purity.

The legend of Agnes' martyrdom was embellished over the years. The earliest source for her life is from the writing of Saint Ambrose of Milan in the late fourth century, who gives few details except for Agnes' age and the fact that she was executed by the sword. The version provided by Pope Damasus I (reigned 366 to 383) contradicts this, however, saying she suffered martyrdom by fire. Damasus adds that she voluntarily declared herself a believer immediately after the promulgation of Diocletian's imperial edict against the Christians. He further describes her courage and modesty. Thus, Agnes thought nothing of her own pain or even her death, but was particularly concerned at the moment of her martyrdom to conceal her chaste body, which had been exposed to the gaze of the pagan multitude. She succeeded in covering her nakedness by means of her long, flowing hair.

In the late fourth century, the Christian poet Prudentius, in his Liber Peristephanon ("Crowns of Martyrdom") adds the detail that the judge in the case, in order to force her to recant her faith, threatened to send her to a house of prostitution, and carried out this threat when Agnes refused to comply. Prudentius also relates that when a certain young man looked with lust upon upon her, he fell to the ground paralyzed and stricken with blindness. Finally, the Acts of the Martyrdom of St. Agnes, belonging to a somewhat later period, brings the story to its full elaboration, in which the circumstance of her condemnation and the brothel episode are still further described, and Agnes is decapitated by the sword after remaining miraculously untouched by the flames. 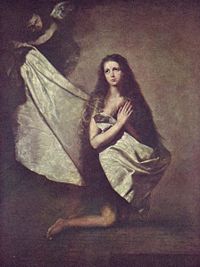 Saint Agnes before her martyrdom

The mature legend of Saint Agnes of Rome exists in at least three versions, two in Greek and one in Latin. It may be summarized as follows:

Saint Agnes was a member of the Roman nobility born c. 291 and raised in a Christian family. She suffered martyrdom at the age of 12 during the reign of the Eastern Roman Emperor Diocletian, on January 21, 304. Agnes' parents were pagans, but she had learned about Jesus and the Gospel from her nurse-slave, with whom she was very close. Phocus, the son of the prefect Roman governor Sempronius, was one of several rich young men who fell in love with Agnes. He brought her rich gifts of jewels, but she rejected his courtship, saying, “I am already the spouse of a Lover much more noble and powerful than you.”

The dejected Phocus later learned that Agnes was a Christian and denounced her to his father. Sempronius questioned her officially, and she freely admitted her faith in Jesus. He ordered her to go the temple of Vesta—the virgin goddess of the hearth, home, and family—to offer her a sacrifice, or even to devote herself as one of the Vestal Virgins, but Agnes steadfastly refused any compromise with pagan practice.

Threats of death also did not sway her (some sources indicate that Roman law did not permit the execution of virgins), so the judge threatened her chastity instead. Even this did not frighten her into submission, and Agnes was thus stripped naked and dragged through the streets to a brothel. On the way, as the saint prayed, her hair miraculously grew and covered her body to protect her modesty. At the brothel, she was protected by an angel when several men attempted to have their way with her by force (some versions name Phocus as her attacker). All of those who attempted to rape her were immediately struck blind and/or paralyzed.

Although Agnes remained a virgin, she was now condemned as a witch and led out tied to a stake to be burned. However, the bundle of wood would not burn, whereupon the officer in charge drew his sword and struck off her head (or stabbed her in the throat). The execution reportedly shocked even the bloodthirsty pagan crowd, since Agnes was so young and pure. Thus, her death created a new wave of sympathy for the Christians and brought many to the faith.

A few days after Agnes' death, a girl named Emerentiana was found praying by her tomb. She identified herself as the daughter of Agnes' wet nurse, and was stoned to death after refusing to leave the place and for reprimanding the pagans for killing her foster sister. Emerentiana, too, was later canonized as a saint.

The name "Agnes" is derived from the feminine Greek adjective hagnē (ἁγνή) meaning "chaste, pure, sacred." The cult of Saint Agnes was extremely popular in antiquity and remained widespread in the Middle Ages, especially as one of the first examples of the concept of virginal betrothal to Christ, which had become a central idea in monastic ideology. In recent times, however, the historicity of her story has been called into question. 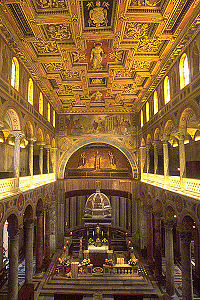 Hundreds of churches are named in honor of Saint Agnes, most notably the Church of Sant'Agnese fuori le mura in Rome. There are even two Catholic churches and one Anglican cathedral devoted to her in Kyoto, Japan. She is often depicted in art with a lamb, probably due to the fact that her name resembles the Latin word agnus, which means "lamb," as well as to the lamb's association with gentleness, purity, and submission. On her feast day, two lambs are traditionally brought from the Trappist abbey of Tre Fontane in Rome to the pope to be blessed. The wool from these lambs are woven the pallium which the pope himself wears and which he gives to newly consecrated archbishops as a sign of his jurisdiction and his union with the pope.

In art, Saint Agnes is represented as a young girl in robes, holding a palm branch in her hand and a lamb at her feet or in her arms. Agnes is the patron saint of young girls.

Many folk tales and legends of Saint Agnes circulated in Europe in the Middles Ages. The German Benedictine canoness Hrosvit of Gandersheim wrote a play about her in the tenth century. Folk custom called for young girls to practice rituals on Saint Agnes' Eve (January 20-21) in order to discover their future husbands. This superstition has been immortalized in John Keats' whimsical poem, "The Eve of Saint Agnes:"

They told her how, upon St. Agnes’ Eve,
Young virgins might have visions of delight,
And soft adorings from their loves receive
Upon the honey’d middle of the night,
If ceremonies due they did aright;
As, supperless to bed they must retire,
And couch supine their beauties, lily white;
Nor look behind, nor sideways, but require
Of Heaven with upward eyes for all that they desire.

In the historical novel Fabiola or, the Church of the Catacombs, written by Cardinal Nicholas Wiseman in 1854, Agnes is the soft-spoken teenage cousin and confidant of the protagonist, the beautiful noblewoman Fabiola.

Her feast day is January 21, and also on January 28, her birthday. This second feast was suppressed after the reform of the Catholic Church's calendar following the Second Vatican Council. Traditionalist Roman Catholics continue to commemorate this second feast, however.

Retrieved from https://www.newworldencyclopedia.org/p/index.php?title=Agnes_of_Rome&oldid=1052086
Categories:
Hidden category:
This page was last edited on 30 April 2021, at 04:39.
Content is available under Creative Commons Attribution/Share-Alike License; additional terms may apply. See Terms of Use for details.