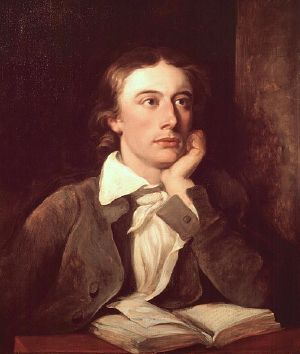 John Keats (October 31, 1795 – February 23, 1821) was one of the principal poets of the English Romantic movement. Keats' poetry is characterized by an exuberant love of language and a rich, sensuous imagination, all of which contrasts sharply with the tragic circumstances of his short life. Keats succumbed to tuberculosis at age 26.

The Romantics prized intuition and emotion over Enlightenment rationalism and stressed the individual imagination as an authoritative voice. Keats felt that the deepest meaning of life lay in the apprehension of material beauty.

Although early critical opinion of Keats' poetry was hostile, with the notable exceptions of his close friends and the exiled poet Percy Shelly, Keats is included among the six major Romantic English poets, which in addition to Shelly included William Blake, Samuel Taylor Coleridge, William Wordsworth, Lord Byron.

Keats, like other late Romantics, seemed little concerned with institutional religion, writing to a friend in 1817, "I am certain of nothing but of the holiness of the Heart's affections and the truth of the Imagination. What the imagination seizes as Beauty must be truth, whether it existed before or not."

John Keats was born on October 31, 1795, in Finsbury Pavement in London, where his father was an ostler. In 1804, his father died from a fractured skull after falling from his horse. His mother remarried soon afterwards, but quickly left the new husband and the family moved in with Keats' grandmother. There, Keats attended a school that first instilled in him a love of literature. In 1810, his mother died of tuberculosis, leaving Keats and his siblings in the custody of their grandmother.

The grandmother appointed two guardians to take care of the children, and these guardians removed Keats from his old school to make him a surgeon's apprentice. In 1814, after a fight with his master, Keats left his apprenticeship and became a student at a local hospital. In 1816 Keats became a licensed apothecary, but he never practiced his profession, deciding instead to devoted more and more of his time to the study of literature, notably the works of William Shakespeare and Geoffrey Chaucer, and to write poetry.

Around this time, Keats met Leigh Hunt, an influential editor of the Examiner, who published his sonnets "On First Looking into Chapman's Homer" and "O Solitude." Hunt also introduced Keats to a circle of literary men, including the poets Percy Bysshe Shelley and William Wordsworth. The group's influence enabled Keats to see his first volume, Poems by John Keats, published in 1817. Shelley, who was fond of Keats, had advised him to develop a more substantial body of work before publishing it.

Keats had his poems published in the magazines of the day at the encouragement of many including James Henry Leigh Hunt Esq. (1784-1859), editor of the Examiner and to whom Keats dedicated his first collection of poems (1817).

In 1817, Keats’ brother Tom was entrusted to his care. Tom was suffering from tuberculosis, the same disease that had killed their mother. After finishing his epic poem "Endymion," Keats left to hike in Scotland and Ireland with his friend Charles Brown. Sadly, Keats, too, began to show signs of tuberculosis infection on that trip, and returned prematurely. On his return, Keats found that Tom's condition had deteriorated, and that Endymion had, like previous works, been the target of critical abuse.

In 1818, Tom Keats died from his infection, and John Keats moved to live in Brown's newly built house, Wentworth Place, in London. The winter of 1818–1819, though a difficult period for the poet, marked the beginning of the period in which he wrote his most mature work. There he met Fanny Brawne, who had been staying at Brown's house with her mother, and they quickly fell in love. The later (posthumous) publication of their correspondence caused a scandal in Victorian society.

This relationship was cut short, however. By 1820, Keats began to worsen from the tuberculosis that had plagued his family. On the suggestion of his doctors, he left the cold airs of London behind, moving to Italy with his friend Joseph Severn. Keats moved into a house on the Spanish Steps, in Rome, where despite attentive care from Severn and Dr. John Clark, the poet's health rapidly deteriorated. He died on February 23, 1821, and was buried in the Protestant Cemetery, Rome. According to his last request, Keats was buried under a tombstone reading "Here lies one whose name was writ in water."

Keats' introduction to the work of Edmund Spenser, particularly The Faerie Queene, was to prove a turning point in his development as a poet. Spenser's work inspired Keats to write his first poem, which he entitled Imitation of Spenser. Keats befriended Leigh Hunt, a poet and editor who published his first poem in 1816. In 1817, Keats published his first volume of poetry entitled simply Poems. Keats' Poems was not well received, largely due to his connection with the controversial Hunt. His earliest major poem was the 1817 pastoral epic Endymion. The poem consists of four sections of one thousand lines each, and is written in loose rhyming couplets. The poem tells the story of the Greek legend of the moon goddess Diana's love for the human shepherd, Endymion. However, in a characteristically Romantic twist, Keats focuses the narrative not on Diana's love for a mortal, but Endymion's love for the unattainable goddess. This narrative turn illustrates the Romantic Movement's concern with discovering idealized and mystical expressions of passion. In the poem, Endymion, suffering terribly from his unrequited love for Diana, decides to abandon his goddess and engages in a romance with an earthly woman, only to discover that the earthly woman is in fact Diana. Though Endymion was a breakthrough for Keats in some regards and marked the first signs of his mature style, he immediately dismissed it as a failure.

Keats' poems written in the following year would primarily be love poems infused with extremes of emotion, reflecting the turbulent turn of events in his life. By this time he had fallen madly in love; he was desperately poor; his brother was dying; and he himself had begun cough up blood and exhibit other symptoms of the disease that would claim his life. Keats' poems of this period include the lengthy, supernatural love poem “The Eve of St. Agnes” and the dark sonnet “When I have fears that I may cease to be”:

When I have fears that I may cease to be
Before my pen has glean'd my teeming brain,
Before high-piled books, in charactery,
Hold like rich garners the full ripen'd grain;
When I behold, upon the night's starr'd face,
Huge cloudy symbols of a high romance,
And think that I may never live to trace
Their shadows, with the magic hand of chance;
And when I feel, fair creature of an hour,
That I shall never look upon thee more,
Never have relish in the faery power
Of unreflecting love;—then on the shore
Of the wide world I stand alone, and think
Till love and fame to nothingness do sink.

Keats produced some of his finest poetry during the spring and summer of 1819 including “Ode to Psyche,” “Ode on a Grecian Urn,” “Ode to a Nightingale,” “Ode on Melancholy,” and “To Autumn.” The odes all follow a similar form, where the poet meditates on a theme (the song of a nightingale, the thought of mortality, or the coming of autumn) which leads him to reflection on the exuberant beauty of the world coupled with the sad realization of its transience and ultimate demise. The odes are not only remarkable for their content, which, in comparison to the superstition of Shelley or the Epicureanism of Lord Byron, is strikingly sober for a Romantic poet. This series of odes is considered to be among the most moving poetry written in English, drawing comparisons to the verse of William Shakespeare and John Milton. A passage from “Ode on a Grecian Urn” shows the form and theme of these poems:

Thou still unravish'd bride of quietness,
Thou foster-child of Silence and slow Time,
Sylvan historian, who canst thus express
A flowery tale more sweetly than our rhyme:
What leaf-fringed legend haunts about thy shape
Of deities or mortals, or of both,
In Tempe or the dales of Arcady?
What men or gods are these? What maidens loth?
What mad pursuit? What struggle to escape?
What pipes and timbrels? What wild ecstasy?

During 1819, Keats partially worked on an epic poem, Hyperion, which he sadly never finished. Keats intended Hyperion to be a return to the topics of passion and anguish raised in Endymion but without the youthful follies from which that poem suffered. Hyperion was a retelling of the Greek legend of the Titans, and particularly the tragic story of Hyperion, the god of the sun, and his battle with the upstart Zeus. The first version of the poem is an open imitation of Milton's Paradise Lost, but the second version, which Keats worked on almost until his death, was stripped down and resembles more closely the beautifully clear language of the late odes.

Although only fragments of the work exist, Hyperion presents a clear description of Keats' view of the role of poetry in the world Through the voice of the goddess Moneta, Keats reveals to another character in the poem that it is the duty of the poet not only to understand the world, but to immerse himself in its suffering, so as to do it justice. The thought is not new for Keats—it appears in the odes and in other earlier poems—but in Hyperion Keats' vision of poetry reaches its highest apex, and it is perhaps appropriate that such a vision was composed while Keats himself was suffering a terminal illness.

Keats developed his poetic theories, chief among them "Negative Capability" and "The Mansion of Many Apartments" in letters to friends and family. In particular, he stated he wished to be a “chameleon poet” and to resist the “egotistical sublime” of William Wordsworth's writing. Oscar Wilde later wrote:

[…] who but the supreme and perfect artist could have got from a mere colour a motive so full of marvel: and now I am half enamoured of the paper that touched his hand, and the ink that did his bidding, grown fond of the sweet comeliness of his charactery, for since my childhood I have loved none better than your marvellous kinsman, that godlike boy, the real Adonis of our age[..] In my heaven he walks eternally with Shakespeare and the Greeks.

William Butler Yeats was intrigued by the contrast between the “deliberate happiness” of Keats's poetry and the sadness that characterized his life. He wrote in Ego Dominus Tuus (1915):

I see a schoolboy when I think of him,

With face and nose pressed to a sweet-shop window, For certainly he sank into his grave His senses and his heart unsatisfied, And made– being poor, ailing and ignorant, Shut out from all the luxury of the world, The coarse-bred son of a livery-stable keeper–