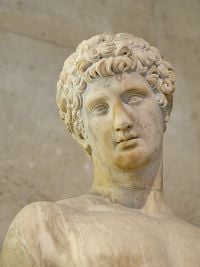 In Greek mythology, Adonis was a mortal male of incredible beauty and a polyamorous lover. Seen as an archetypal life-death-rebirth figure, Adonis was closely connected to the seasons and came to be recognized in Greek religion as an ever-youthful, annually-renewed vegetation deity.

Myths about Adonis abounded among the ancient Greeks and he was renowned for both his attractiveness and vanity. It is said that Adonis was born out of an incestuous relationship and had many sexual companions. The development of cultic rituals surrounding him, such as the midsummer Adonia festival, involved the dedication of young girls to Adonis to reenact rituals of renewal.

Despite his natural human mortality, it is said that Adonis was resurrected by Zeus following his earthly death. Thus, the concepts of death and resurrection are tied to the myth of Adonis, which foreshadowed the central role of resurrection in the religion of Christianity.

The name Adonis derives from Semitic origin and is a variation of the Phoenician Adon meaning "Lord." The theonym Adonis also bears striking resemblance to Adonai, one of the names used to refer to Yahweh, the singular God of the ancient Israelites.

Various ancient Near Eastern gods, such as the Babylonian Tammuz and the Sumerian Dumuzi, like Adonis, were sexual companions of goddesses, and both suffered grisly deaths by mutilation. Adonis also bears some similarity to the Egyptian Osiris, another deity of fertility as well as the Etruscan Atunis and the Phrygian Attis—both of whom are deities of rebirth and vegetation. Cult practices indicate that Adonis was based particularly heavily on Tammuz, for whom women would sit and weep, often sitting on roof-tops and planting plants in memory of the god. This ritual of lamentation resembles that which was performed by Greek women in the festival of Adonia (see below). 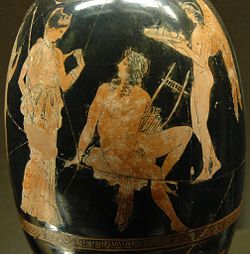 Various accounts of Adonis' birth exist. For example, in Bibliothek (The Library), Adonis is considered to be the son of Cinyras, of Paphos on Cyprus, and Metharme. It is also noted, however, that Hesiod stated that Adonis was a son of Phoenix and Alphesiboea, while Panyassis said that he was a son of Thias, king of Assyria.[1] The most commonly accepted version is that Aphrodite urged Smyrna (Myrrha) to commit incest with her father, Theias, the King of Syria. Myrrha's nurse helped with the scheme, and Myrrha coupled with her father in the darkness. When Theias at last discovered this deception by means of an oil lamp, he flew into a rage, chasing his daughter with a knife. Myrrha fled from her father, and Aphrodite turned her into a myrrh tree. When Theias shot an arrow into the tree—or, according to another account, when a boar used its tusks to rend the tree's bark—Adonis was born from the tree. This myth fits Adonis' nature as a vegetation god and suggests his origins from the hot foreign desert lands where the myrrh tree grew, since it was not found in ancient Greece.

Adonis was a beautiful baby, so beautiful in fact that Aphrodite placed him in a closed chest, which she delivered for security to Persephone, queen of the underworld. Persephone was also entranced by his unearthly beauty and fell in love with the youth, refusing to give him back to Aphrodite. An argument ensued between Aphrodite and Persephone, resulting in an appeal to Zeus, the heavenly monarch (or Calliope in other versions). Zeus decreed that Adonis should spend four months of the year with Aphrodite, four months with Persephone, and four months of the years to himself. Thus, the myth of Adonis provided ancient Greeks with an explanation for the changing seasons. Aphrodite was still dissatisfied, and with the help of her friend Helene, she eventually seduced Adonis so that he would spend the four months which he had at his disposal with her. 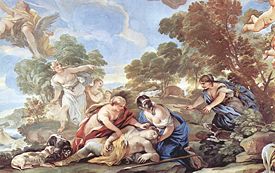 Death of Adonis, by Luca Giordano.
Did you know?
In Greek mythology Adonis was resurrected by Zeus following his premature earthly death

Adonis became an avid hunter, and ended up being killed by a wild boar during the hunt. This boar was sent by Persephone, who was livid with Aphrodite's attempts at commandeering more time with Adonis. Alternative tellings claim that the boar was sent by either Artemis (in retaliation for Aphrodite's complicity in the death of her beloved Hippolytus) or else by Aphrodite's paramour, Ares, who had grown considerably jealous of her trysts with Adonis. In the aftermath, Aphrodite mourned feverishly, pleading to Zeus for the renewed life of her lover. Zeus was swayed by Aphrodite's pleas, and eventually resurrected Adonis, allowing him to spend half of each year with her and the other half in the underworld. Thus, Adonis is tied to the idea of death and resurrection, which parallels the decay of the summer as winter approaches, and its eventual revival in the spring. Further, the juxtaposition between Adonis' birth from the myrrh tree, the spice of which was used by Greeks as an aphrodisiac, and his death in a field of lettuce, a vegetable which symbolizes impotence, suggests that Adonis symbolizes immature and excessive sexuality. Thus, he stands in contrast to Demeter, the goddess of marriage and agriculture, who provides an example of a more temperate sexuality controlled by the grounds of marriage.

Adonis was celebrated during the annual festival of Adonia held at Byblos and other locations during the warmest period of the summer alongside the rising of Sirius, the Dog Star. The festival seems to have been celebrated primarily by women. During this festival, prostitutes would plant "gardens of Adonis" on their roof-tops. These gardens consisted of quick-growing plants such as fennel and lettuce, which sprang up from seed and then promptly withered. The expedient death of the plants in their pots reenacted the premature death of Adonis, which occurred before he could enter into marriage, the definitive union of the mature Greek citizen. Women partaking in the festival would then mourn for the untimely death of the vegetation god. Not only did this festival commemorate the story of Adonis, but it also seems to have been an effort to propitiate rainfall for the growth of vegetation. A fragment of Sappho reveals that a fully-developed cult dedicated to the dying Adonis was prevalent among circles of young girls centered around Lesbos Island around 600 B.C.E.. Burkert concludes that the special function of the worship of Adonis was that it provided a brief reprieve from the otherwise strictly circumscribed lives of Greek women, in stark contrast to the rigorous order of polis and family, which characterized the official women's festivals that honored Demeter.

The figure of Adonis has remained prominent not only in Greece but also in other parts of the Western world, both past and present. Some mythologists suggest that Adonis was later exported to Germania, identifying parallels between he and Balder, the Norse god of spring and renewal who was also resurrected after his death.

In modern parlance, the name "Adonis" is commonly used as an allusion to an extremely attractive, youthful male, often with a connotation of deserved vanity.