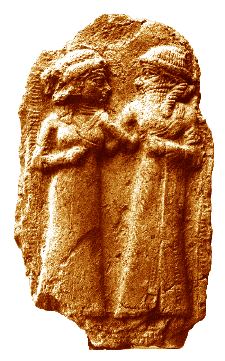 The marriage of Inanna and Tammuz, reproduction of a sumerian sculpture

Tammuz (also known as Dumuzi) was the name of an ancient Near Eastern deity who was best known for his patronage of herdsmen and his romantic entanglement with Inanna (the Sumerian goddess of sexual love) also known as Astarte or Ishtar. As a fertility god, he represented the insemination of the mother goddess, as well as the production of healthy children. The best-known myth of Tammuz describes his death at the hands of his lover, a punishment earned for his failure to mourn adequately when she became lost in the Underworld. The god's sojourn among the dead was commemorated in various forms of human expression, including poetic laments and ritual practice.

In his Syrian iteration, Tammuz was incorporated into the Hellenic pantheon as Adonis, a beautiful youth who earned the love of Aphrodite.

The concepts of death and resurrection are tied to the myth of Tammuz, which foreshadowed the central role of resurrection in the religion of Christianity.

Though the Babylonian/Assyrian god Dumuzi was known by a variety of names throughout the Middle East (including the Hebrew תַּמּוּז, Tammuz; the Arabic تمّوز, Tammūz; the Akkadian Duʾzu; and the Sumerian Dumuzid (DUMU.ZID)), all are transliterations of a single divine moniker (likely, the Babylonian Du'uzu).[1] As the names of Babylonian gods often offer insight into the character of the deities in question,[2] determining an accurate etymology is more than a simple academic concern. After an extensive analysis of extant literary materials, Thorkild Jacobsen offers the following analysis:

[W]e can now interpret the divine name Dumu-zi(d) as "the good young one," and see the god as a power manifesting itself in the normal nondefective newborn lambs or kids.... Dumuzi was a shepherd's god, his full name and title was Dumuzi sipad, "Dumuzi the Shepherd," and it is easy to understand that shepherds might worship a power that guarded the health of newborn animals and kept them from being born defective. The increase and thriving of their herds depended on that.[3]

Though lacking the direct linguistic continuity evidenced by the names listed above, the Helleno-Syrian Adonis ("lord") was another counterpart of Tammuz.[4]

Building upon the intriguing possibility that Tammuz could have been a mortal man apotheosized through the love of Ishtar/Inanna, archaeologists have recently discovered a list of Sumerian kings that includes two monarchs named Dumuzi:

Other Sumerian texts showed that kings were to be married to Inanna in a mystical marriage, such as a hymn describing the mystical marriage between the goddess and King Iddid-Dagan (ca 1900 B.C.E.).[5]

In the various mythological accounts depicting Tammuz/Dumuzi, he plays a variety of roles—from lowly shepherd to divine ruler.[6] One relatively common element, however, is his association with various powerful Goddesses, in particular, the regal Ishtar/Inanna. As his mythical/religious import is particularly dependent upon these relationships, it follows that an exploration of these various accounts is the best way to gain insight into the god's character.

In the first case, the amorous component of their relationship is baldly attested to in a large corpus of pastoral poems and songs, which relate the early stages of the love affair between Inanna (the goddess of fertility) and Dumuzi (either a human shepherd or the god of shepherds). This romantic connection is described in great detail in The Courtship of Inanna and Dumuzi, a poem that is notable for both its tenderness and its graphic depictions of sexuality:

In a marked contrast to these joyful celebrations of agricultural fecundity, the mythic corpora of the Sumerians and Babylonians also contain numerous lamentations and dirges bemoaning the death of the divine husbandman.[8] In the most prominent depiction of the god's demise, he is undone by his failure to mourn for his departed consort—a hubristic act that earns him the considerable displeasure of Inanna.

Descent into the Underworld

According to the myth of Inanna's descent to the underworld, represented in parallel Sumerian and Akkadian[9] tablets, Inanna (Ishtar in the Akkadian texts) set off for the netherworld—the demesnes of her sister Ereshkigal—perhaps with the intention of taking it as her own. Undeterred by her sister's exhortations to return to the world of the living, the goddess passed through seven gates, though at each one she was required to leave a garment or an ornament behind, so that when she had passed through the seventh gate she was entirely naked (and defenseless). Despite warnings about her presumption, Inanna did not turn back but dared to sit herself down on Ereshkigal's throne. Immediately the Anunnaki of the underworld judged her, found her wanting, and transformed her into a lifeless corpse hung up on a nail. With the goddess of fertility thus imprisoned, all sexual congress throughout the universe abruptly ceased.[10]

Desperate to aid his master, Inanna's faithful servant attempted to enlist help of other gods but only wise Enki (Babylonian "Ea") responded. The details of Enki/Ea's plan differ slightly in the two surviving accounts, but in the end, Inanna/Ishtar was resurrected. However, a law of "conservation of souls" required her to find a spirit to take her place in the underworld—an unpleasant responsibility that was enforced by a cadre of demons loyal to Ereshkigal. Unfortunately, Inanna's scouring of the world was initially fruitless, as every being she saw was in the midst of mourning her passing. This trend was abruptly reversed when she returned to her home city, where she found Dumuzi richly dressed and sitting on her throne. Inanna, furious with her faithless lover, immediately set her accompanying demons on Dumuzid. Though he initially attempted to flee, the divine king was eventually harried by the demonic hordes and delivered to the underworld in his wife's stead. As the god died, he dragged his butter-churn to the ground and smashed it—a potent symbol of his lost fertility.

After a time, Inanna relented and changed her decree, thereby restoring her husband Dumuzi to life for a portion of the year. In order to affect this compromise, however, it was necessary to come to an arrangement with (Dumuzi's sister), who agreed to take Dumuzid's place in Kur for a certain number of days a year (with the amount varying in different sources).[11]

Commenting on this myth, Powell offers the following interpretation:

Inanna's descent to the underworld is her death, and the end of fertility on earth. Her return to the upper world is her resurrection, the return of life on earth. But renewed life can be purchased only at the price of another's death, in this case her consort Dumuzi. Herein lies the logic of ritual (even human) sacrifice.[12]

As an aside, it should be noted that not all accounts describe Inanna as being responsible for her consort's death,[13] but these other versions are the exception rather than the rule.

Based on the first Mesopotamian texts discovered by archaeologists, it was initially assumed that Ishtar/Inanna's descent into the underworld occurred after the death of Tammuz/Dumuzid, rather than before it. As such, her goal (like Orpheus) was to rescue her departed love. This version became popularized in M. Jastrow's "Descent of the Goddess Ishtar into the Lower World" (1915), a tremendously popular account. Though new texts uncovered in 1963 presented a considerably different picture of the tale (as outlined above),[14] the old interpretation still persists in certain circles, especially among those who seek parallels between Middle Eastern deities and the resurrected Christ. For instance, it is in this vein that Paul Carus states: "The ancient Tammuz is one of the most important prototypes of Christ. He is a god-man, an incarnation of the deity who is born as a human being, dies in the course of time and eakes to life again."[15]

In Babylonia, the month Tammuz was established in honor of the eponymous god Tammuz, who originated as a Sumerian shepherd-god, Dumuzid or Dumuzi, the consort of Inanna (the Akkadian Ishtar).

In cult practice, the dead Tammuz was widely mourned in the Ancient Near East. A Sumerian tablet (Ni 4486 from Nippur reads:

These ceremonies were observed even at the very door of the Temple in Jerusalem, to the horror of the Jewish prophet Ezekiel:

"Then he brought me to the door of the gate of the Lord's house which was toward the north; and, behold, there sat women weeping for Tammuz. Then said he unto to me, 'Hast thou seen this, O son of man? turn thee yet again, and thou shalt see greater abominations than these."—Ezekiel 8.14-15

Ezekiel's testimony is the only direct mention of Tammuz in the Hebrew Bible.