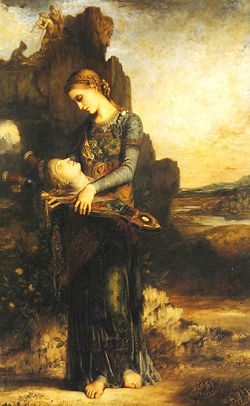 The head of Orpheus, from an 1865 painting by Gustave Moreau.

Orpheus (Greek: Ορφεύς; pronunciation: ohr'-fee-uhs)[1] is a figure from Greek mythology called by Pindar "the minstrel father of songs."[2] His name does not occur in Homer or Hesiod, though he was known by the time of Ibycus (c. 530 B.C.E.).[3]

In the poetic and mythic corpora, Orpheus was the heroic (i.e. semi-divine) son of the Thracian king Oeagrus and the muse Calliope, a provenance that guaranteed him certain superhuman skills and abilities.[4] In particular, he was described as the most exalted musician in antiquity, whose heavenly voice could charm wild beasts, coax the trees and rocks into dancing, and even divert the course of rivers.[5] In addition, Apollodorus (and other classical mythographers) describe Orpheus as the sailing companion of Jason and the Argonauts.[6]

Some of the other traits associated with Orpheus (and with the mystery religion bearing his name) suggest that he was an augur and seer; practiced magical arts, especially astrology; founded or rendered accessible many important cults, such as those of Apollo and the Thracian god Dionysus; instituted mystic rites both public and private; and prescribed initiatory and purificatory rituals.[7]

The mythic accounts describing the provenance of Orpheus lack a consensus on the parents of the musical hero. While most suggest that his father was Oeagrus (the king of Thrace) and that his mother was the muse Calliope,[8] many alternate lineages also exist. Most significantly, he is occasionally seen as the son of Apollo and either Calliope or a mortal woman—an understandable attribution, given their mutual prowesses in the performing arts.[9]

Despite his reputation as an effete musician, one of the earliest mythic sagas to include Orpheus was as a crew-member on Jason's expedition for the Golden Fleece. In some versions, the centaur Chiron cryptically warns the leader of the Argonauts that their expedition will only succeed if aided by the musical youth.[10] Though it initially seems that such a cultured individual would be of little help on an ocean-going quest, Orpheus's mystically efficacious music comes to the aid of the group on more than one occasion:

[I]t was by his music that the ship Argo herself was launched; after the heroes had for some time succumbed to the charms of the women of Lemnos, who had killed their husbands, it was Orpheus whose martial notes recalled them to duty; it was by his playing that the Symplegadae or clashing rocks in the Hellespont were fixed in their places; the Sirens themselves lost their power to lure men to destruction as they passed, for Orpheus' music was sweeter; and finally the dragon itself which guarded the golden fleece was lulled to sleep by him.[11] 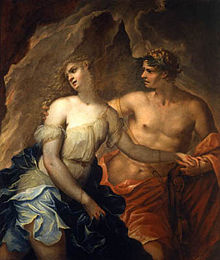 Orpheus and Eurydice, by Federigo Cervelli

Without a doubt, the most famous tale of Orpheus concerns his doomed love for his wife Eurydice. At the wedding of the young couple, the comely bridge is pursued by Aristaeus (son of Apollo), who drunkenly desires to have his way with her. In her panic, Eurydice fails to watch her step and inadvertently runs through a nest of snakes, which proceed to fatally poison her.[12] Beside himself, the musical hero began to play such bitter-sweet dirges that all the nymphs and gods wept. On their advice, Orpheus traveled to the underworld, using his music to soften the hard hearts of Hades and Persephone,[13] who agreed to allow Eurydice to return with him to earth on one condition: he should walk in front of her and not look back until they had reached the upper world. As he returned, each step grew more tentative than the last as he anxiously began to doubt the trustworthiness of the King of the Underworld&mash;perhaps his seemingly kind offer had simply been a cruel trick! In his anxiety, Orpheus broke his promise and turned around, only to see the shade of his wife swallowed up by the darkness of the underworld, never to be seen again.[14]

The precise origin of this tale is uncertain. Certain elements, such as the attempted sexual assault by Aristaeus, were later inclusions (in that case, by Vergil), though the basic "facts" of the story have much greater antiquity. For instance, Plato suggests that the infernal gods only "presented an apparition" of Eurydice to him, and that his weakness was a direct result of his character (as a musician).[15]

This mythic trope (the descent to the Underworld) is paralleled in tales from various mythic systems worldwide: the Japanese myth of Izanagi and Izanami, the Akkadian/Sumerian myth of Inanna's Descent to the Underworld, and Mayan myth of Ix Chel and Itzamna. The theme of "not looking back" is reflected in the story of Lot's wife, during their escape from Sodom. More directly, the story of Orpheus is similar to the ancient Greek tales of Persephone capture at the hands of Hades and of similar stories depicting Adonis held captive in the underworld.

Albrecht Dürer envisioned the death of Orpheus in this pen and ink drawing, 1494 (Kunsthalle, Hamburg) 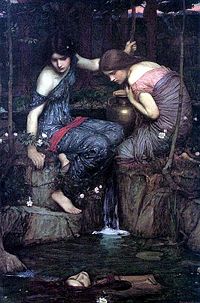 Nymphs Finding the Head of Orpheus, by John William Waterhouse

The unpleasant death of Orpheus (he is rent asunder by the Maenads (ravening devotees of Dionysus) is another popular tale in the mythic accounts of the musician god. What is less certain is the precise motive(s) of these women for their manual dismemberment of the youth, though one of two motivations tend to be stressed in the surviving materials: first, the Maenads were offended when Orpheus decided to voluntarily abstain from heterosexual intercourse after the death of his beloved; second, they felt that he had, in some way, insulted Dionysos.[16] Each of these will be (briefly) addressed below.

According to some versions of the story (notably Ovid's), Orpheus forswore the love of women after the death of Eurydice and took only male youths as his lovers; indeed, he was reputed to be the one who introduced pederasty to the Thracians, teaching them to "love the young in the flower of their youth." This unexpected turn in Ovid's account is summarized by Bakowski:

Within the space of a few short lines Orpheus has gone from tragic lover of Eurydice to trivial pederast worthy of inclusion in Strato's Musa Puerilis. The sudden transfer of sexual energy to the male, the revulsion toward the female, the total obliviousness towards Eurydice, who will not be mentioned again for some seven hundred lines as Orpheus concertizes on pederastic and misogynist themes, is telling and invites a closer look at Ovid's estimation of Greek love.[17]

Conversely, according to a Late Antique summary of Aeschylus's lost play Bassarids, Orpheus at the end of his life disdained the worship of all gods save the sun, which he called Apollo. One morning, he went to the Oracle of Dionysus to salute his god at dawn, but was torn to death by Thracian Maenads for not honoring his previous patron, Dionysus.[20]

Regardless of the cause of his demise, the Maenads then proceeded to fling the mortal remains of the heavenly musician into a nearby river. His head, still singing mournful songs, floated down the swift Hebrus to the Mediterranean shore. There, the winds and waves carried him to Lesbos, where the inhabitants buried his head and a shrine was built in his honor; there, his oracle prophesied, until it was silenced by Apollo.[21] The Muses gathered up the fragments of his body and buried them at Leibethra (below Mount Olympus), where the nightingales sang over his grave. His soul returned to the underworld, where he was re-united at last with his beloved Eurydice.[22] 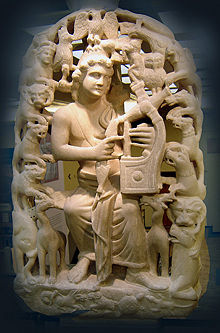 Orpheus with the lyre and surrounded by beasts, Museum Christian-Byzantine, Athens

In addition to this unique role in Greek mythology, the figure of Orpheus was also central to mystery religion (specifically in what was called the Orphic tradition). Orpheus, like Dionysus and Demeter, was credited with a miraculous return from the world of the dead, a fact that seemed to capture the Hellenic religious imagination. For this reason, he was credited as the founder of the sect and numerous mystical/theological poems (which were used in their liturgies) were attributed to him. Of this vast literature, only two examples survive whole: a set of hymns composed at some point in the second or third century C.E., and an Orphic Argonautica composed somewhere between the fourth and sixth centuries C.E. Earlier Orphic literature, which may date back as far as the sixth century B.C.E., survives only in papyrus fragments or in quotations.[23]

In addition to serving as a storehouse of mythological data along the lines of Hesiod's Theogony, Orphic poetry was recited in mystery-rites and purification rituals. Plato in particular tells of a class of vagrant beggar-priests who would go about offering purifications to the rich, a clatter of books by Orpheus and Musaeus in tow.[24] Those who were especially devoted to these cults often practiced vegetarianism, abstention from sex, and refrained from eating eggs and beans—which came to be known as the Orphikos bios, or "Orphic way of life".[25]

The Derveni papyrus, found in Derveni, Macedonia, in 1962, contains a philosophical treatise that is an allegorical commentary on an Orphic poem in hexameters, a theogony concerning the birth of the gods, produced in the circle of the philosopher Anaxagoras, written in the second half of the fifth century B.C.E. Fragments of the poem are quoted making it "the most important new piece of evidence about Greek philosophy and religion to come to light since the Renaissance."[26] The papyrus dates to around 340 B.C.E., during the reign of Philip II of Macedon, making it Europe's oldest surviving manuscript.

The eighteenth-century historian William Mitford wrote that the very earliest form of a higher and cohesive ancient Greek religion was manifest in the Orphic poems, arguing:

But the very early inhabitants of Greece had a religion far less degenerated from original purity. To this curious and interesting fact, abundant testimonies remain. They occur in those poems, of uncertain origin and uncertain date, but unquestionably of great antiquity, which are called the poems of Orpheus or rather the Orphic poems [particularly in the Hymn to Jupiter, quoted by Aristotle in the seventh chapter of his Treatise on the World: Ζευς πρωτος γενετο, Ζευς υςατος, x. τ. ε]; and they are found scattered among the writings of the philosophers and historians."[27]

Likewise, W. K. C. Guthrie considered that Orpheus was the founder of mystery religions and the first to reveal to men the meanings of the initiation rites:

"As founder of mystery-religions, Orpheus was first to reveal to men the meaning of the rites of initiation (teletai). We read of this in both Plato and Aristophanes (Aristophanes, Frogs, 1032; Plato, Republic, 364e, a passage which suggests that literary authority was made to take the responsibility for the rites." Guthrie goes on to write about "... charms and incantations of Orpheus which we may also read of as early as the fifth century B.C.E. Our authority is Euripides, Alcestis (referencing the Charm of the Thracian Tablets) and in Cyclops, the spell of Orpheus".[28]

Retrieved from https://www.newworldencyclopedia.org/p/index.php?title=Orpheus&oldid=1087999
Categories:
Hidden category:
This page was last edited on 18 November 2022, at 02:17.
Content is available under Creative Commons Attribution/Share-Alike License; additional terms may apply. See Terms of Use for details.