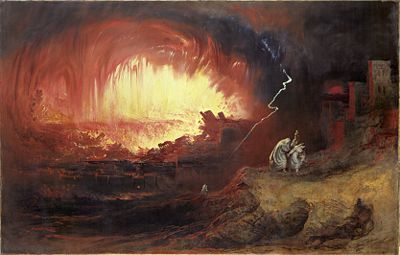 The Destruction of Sodom and Gomorrah, John Martin, 1832.

Sodom—together with its companion Gomorrah and two other towns—was a city destroyed by God for its sins: a complete disregard for the tradition of hospitality and an aggressive form of homosexuality. Sodom, Gomorrah, Admah, and Zeboim were destroyed by "brimstone and fire from the Lord out of heaven" (Genesis 19:24-25). Since then, the names of Sodom and Gomorrah have become synonymous with unrepentant sin, and their fall with a proverbial manifestation of God's just wrath.

Before its destruction, the region around Sodom is described as well watered by the Jordan River, "like the garden of the Lord." (Gen. 13:10) Its king's name is given as Bera. Sodom and Gomorrah were members of a coalition of small city-states known in ancient times as Pentapolis. The patriarch Abraham reportedly came to the military aid of Pentapolis after his nephew Lot, a resident of Sodom, had been taken captive in war (Gen. 14). Lot and his two daughters would be the only people who survived the destruction of Sodom and Gomorrah.

The exact location of the cities is uncertain, but archaeological discoveries at Bab edh-Dhra near the Dead Sea indicate that human habitation there may indeed have been disrupted or brought to an end suddenly as a result of earthquakes combined with gaseous emissions and a fire. Another candidate is the site at Numeira. Some theorists believe Sodom and Gomorrah may now be under water, or that they never truly existed.

Sodom was one of a group of five towns, the Pentapolis (Wisdom 10:6): Sodom, Gomorrah, Admah, Zeboim, and Bela—also called Zoar (Genesis 19:22). Only the last of these was spared from God's punishment, according to the biblical account. The Pentapolis region is also collectively referred to as "the Cities of the Plain" (Genesis 13:12) since they were all sited on the plain of the Jordan River in an area that constituted the southern limit of the lands of the Canaanites (Genesis 10:19). Lot, the nephew of Abraham chose to live in Sodom after separating from Abraham, because of the proximity of good grazing for his flocks (Genesis 13:5-11).

The king of Sodom in Abraham's time was named Bera. In the account in Genesis, he leads the other kings of the Pentapolis in resistance against the Kedorlaomer, king of Elam, a figure unknown outside of the Bible, who had established a growing empire in the region. The resistance collapses, Kedorlaomer's forces sack the Pentapolis, and Lot is among those taken as hostages. Abraham and 318 warriors from his clan then engage in battle to rescue Lot, defeating Kedorlaomer and receiving the homage of Bera, as well as of Melchizedek of Salem. Nevertheless, it is earlier stated that the men of Sodom have already earned God's disapproval because of their sinful ways.

In Genesis 18, God takes the form of three angels and informs Abraham that he plans to destroy the city of Sodom because of its gross immorality. Abraham pleads with God not to destroy the city, and God agrees that he will refrain if there were 50 righteous people found in it. Abraham bargains the Lord down 45, then 30, then 20, or even ten righteous people. Ultimately, of the men of the city, only Lot would be spared.

Two of the angels arrive in Sodom on their mission to destroy the town for its wickedness. However, they first warn Lot and give him and his family a chance to escape. Lot offers the angels—here called "men"—hospitality. However, the Sodomites demand that the visitors be brought out to them to rape them (19:5). Horrified at this outrage, Lot offers the men his virgin daughters instead (19:8), but the would-be attackers only threaten to break down the door in order to have their way with Lot's guests.[1]

The angels immediately strike the townsmen blind and warn Lot of the impending doom that God has pronounced on Sodom. Lot attempts to warn his sons-in-law—who were betrothed but not yet married to his daughters—of the catastrophe, but they did not take his warning seriously.

At dawn, the angels lead Lot and his family out of the city, taking each of them by the hand after Lot hesitates. "Flee for your lives!" one of them commands. "Don't look back, and don't stop anywhere in the plain! Flee to the mountains or you will be swept away!" 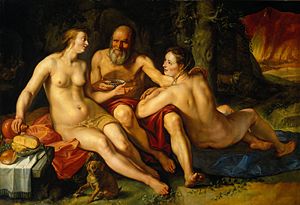 Lot fears he has insufficient time to reach the mountains and asks instead to find shelter in the small town of Zoar. The angels agree not to destroy this town, on the grounds that it was only a small village and therefore not very wicked. With Lot safe in Zoar and the sun now fully risen, God destroys both Sodom and Gomorrah, as well as the surrounding plain and all of its vegetation. Lot's wife, however, makes the tragic mistake of looking back toward Sodom while the destruction proceeds, and is consequently turned into a pillar of salt.

Now afraid to remain in Zoar, Lot retires with his two daughters to a cave in adjacent mountains. There they live together for an indeterminate period. Believing they were the only females in the area to have survived the devastation, the two women decide on a desperate plan. They ply their father with wine for two nights in a row. On they first night, the older daughter seduces him into having sexual intercourse, and on the second night the younger daughter does likewise. Each of the women became pregnant by him. The son of the elder daughter was named Moab, patriarch of the nation known as the Moabites. The second son was named Ben-Ammi. He became the patriarch of the nation of the Ammonites.

A rabbinical tradition, described in the Mishnah, postulates that the sin of Sodom was related to property: Sodomites believed that "what is mine is mine, and what is yours is yours" (Abot), which is interpreted as a lack of compassion. Another rabbinic tradition is that Sodom and Gomorrah treated visitors in a sadistic fashion and that thereby it sinned against the tradition of hospitality.

A story goes that in Sodom, everyone who gave bread and water to the poor was condemned to death by fire. Another states that Pentapolis existed only 52 years, and during the last 22 of them God brought earthquakes and other misfortunes upon it that it might repent. The inhabitants of the cities of the plain worshiped the sun and the moon (Yalḳ., Gen. 83).

Traditional theologians accept that the sins of Sodom were homosexuality and rape. However, the following New Testament passage has given rise to debate:

...even as Sodom and Gomorrah, and the cities about them in like manner, giving themselves over to fornication, and going after strange flesh, are set forth for an example, suffering the vengeance of eternal fire. (Jude 1:7)

Liberal theologians tend to emphasize the ancient rabbinical texts which portray the sin of Sodom as primarily an economic one. Others take the view that the biblical account of homosexual sin at Sodom is undeniable, but understand it primarily as a legend, arguing that it represents an anachronistic moral attitude, since science has shown that homosexuality is not merely an ethical choice but also a genetic predisposition.

In Islamic tradition, the story of the prophet Lot (called "Lut") is often used as a reference to show that homosexuality is haraam—against God's law. Indeed, Lut was commanded by God to go to the land of Sodom and Gomorra to preach against homosexuality. His message was ignored, and Sodom and Gomorrah were destroyed. In the Qur'anic account, Lut's wife refuses to leave the city and is left behind to be destroyed, rather than turning into a pillar of salt as she is in the biblical account.

Another difference between the story of Lut in the Qur'an and the story of Lot in the Bible is that the Qur'anic account does not include Lot's incestuous relationship with his daughters, since, as a prophet in Islamic tradition, Lot would never engage either in drunkenness or incest. 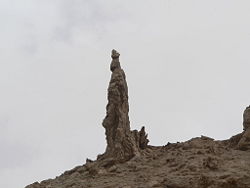 An ancient Akkadian poem describes cities that were destroyed in a rain of fire, written from the view of a person who escaped the destruction, however the names of the cities are not given.[2]

The Greek historian Strabo (first century C.E.) states that locals living near Moasada (probably referring to Masada) reported that "there were once 13 inhabited cities in that region of which Sodom was the metropolis."[3] There is a small "mountain," mainly composed of salt, next to the Dead Sea, called in Arabic Jabal (Mount) Usdum, which is similar to the Arabic for Sodom, Sadūm.

Some modern biblical scholars suggest the destruction of the cities may have been factual, with the account of Lot and the sin of the Sodomites added later as an explanation for a natural disaster. Geologists have confirmed that no volcanic activity occurred in the region within the last 4000 years, but it is possible that the towns were destroyed by an earthquake, especially if the towns lie along a major fault, the Jordan Rift Valley, the northernmost extension of the Great Rift Valley of the Red Sea and East Africa.[4]

One candidate for Sodom is a site known as Bab edh-Dhra. Bab edh-Dhra was an Early Bronze Age city located near the Dead Sea, and bitumen and petroleum deposits have been found in the area, which contain sulfur and natural gas. The theory is that an earthquake opened a nearby pocket of natural gas. This gas drifted up and reacted with fires burning in the city. As a result, the city was devastated. Another site suggest is that of nearby Numeira. 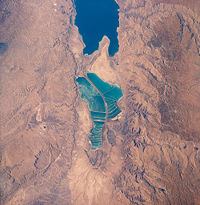 Aerial view of the Dead Sea Works evaporation ponds at modern Sodom, used to collect potash and other minerals.

In accordance with the general Israeli practice of naming places for the cities or villages which existed in biblical times, the site of the present Dead Sea Works, extensively extracting the Dead Sea minerals, is called "Sdom" (סדום). It is not claimed, however, that this is the biblical city. Unlike its biblical namesake, the modern Sodom is not associated with sins but with hard working crews sweating in the summer heat of the Dead Sea shores to harvest potash and other minerals from the region.