An earthquake is the result of a sudden release of stored energy in the Earth's crust that creates seismic waves. At the Earth's surface, earthquakes may manifest themselves by a shaking or displacement of the ground. Sometimes, they cause tsunamis, which may lead to loss of life and destruction of property. An earthquake is caused by tectonic plates becoming stuck and putting a strain on the ground. The strain becomes so great that rocks give way by breaking and sliding along fault planes. Earthquakes are measured with a seismometer, commonly known as a seismograph.

Earthquakes may occur naturally or as a result of human activities. Smaller earthquakes can also be caused by volcanic activity, landslides, mine blasts, and nuclear tests. In its most generic sense, the word earthquake is used to describe any seismic event—whether a natural phenomenon or an event caused by humans—that generates seismic waves.

An earthquake's point of initial ground rupture is called its focus or hypocenter. The term epicenter means the point at ground level directly above this. Most naturally occurring earthquakes are related to the tectonic nature of the Earth. Such earthquakes are called tectonic earthquakes. The Earth's lithosphere is a patchwork of plates in slow but constant motion caused by the release to space of the heat in the Earth's mantle and core. The heat causes the rock in the Earth to become flow on geological timescales, so that the plates move, slowly but surely. Plate boundaries lock as the plates move past each other, creating frictional stress. When the frictional stress exceeds a critical value, called local strength, a sudden failure occurs. The boundary of tectonic plates along which failure occurs is called the fault plane. When the failure at the fault plane results in a violent displacement of the Earth's crust, the elastic strain energy is released and seismic waves are radiated, thus causing an earthquake. This process of strain, stress, and failure is referred to as the Elastic-rebound theory. It is estimated that only 10 percent or less of an earthquake's total energy is radiated as seismic energy. Most of the earthquake's energy is used to power the earthquake fracture growth and is converted into heat, or is released to friction. Therefore, earthquakes lower the Earth's available potential energy and raise its temperature, though these changes are negligible.

The majority of tectonic earthquakes originate at depths not exceeding tens of kilometers. In subduction zones, where older and colder oceanic crust descends beneath another tectonic plate, Deep focus earthquakes may occur at much greater depths (up to seven hundred kilometers). These seismically active areas of subduction are known as Wadati-Benioff zones. These are earthquakes that occur at a depth at which the subducted lithosphere should no longer be brittle, due to the high temperature and pressure. A possible mechanism for the generation of deep focus earthquakes is faulting caused by olivine undergoing a phase transition into a spinel structure.[1]

Earthquakes may also occur in volcanic regions and are caused there both by tectonic faults and by the movement of magma in volcanoes. Such earthquakes can be an early warning of volcanic eruptions.

A recently proposed theory suggests that some earthquakes may occur in a sort of earthquake storm, where one earthquake will trigger a series of earthquakes each triggered by the previous shifts on the fault lines, similar to aftershocks, but occurring years later, and with some of the later earthquakes as damaging as the early ones. Such a pattern was observed in the sequence of about a dozen earthquakes that struck the North Anatolian Fault in Turkey in the twentieth century, the half dozen large earthquakes in New Madrid in 1811-1812, and has been inferred for older anomalous clusters of large earthquakes in the Middle East and in the Mojave Desert.

Size and frequency of occurrence

Small earthquakes occur nearly constantly around the world in places like California and Alaska in the United States, as well as in Chile, Indonesia, Iran, the Azores in Portugal, New Zealand, Greece, and Japan.[2] Large earthquakes occur less frequently, the relationship being exponential; for example, roughly ten times as many earthquakes larger than magnitude 4 occur in a particular time period than earthquakes larger than magnitude 5. In the (low seismicity) United Kingdom, for example, it has been calculated that the average recurrences are:

The number of seismic stations has increased from about 350 in 1931 to many thousands today. As a result, many more earthquakes are reported than in the past because of the vast improvement in instrumentation (not because the number of earthquakes has increased). The USGS estimates that, since 1900, there have been an average of 18 major earthquakes (magnitude 7.0-7.9) and one great earthquake (magnitude 8.0 or greater) per year, and that this average has been relatively stable. In fact, in recent years, the number of major earthquakes per year has actually decreased, although this is likely a statistical fluctuation. More detailed statistics on the size and frequency of earthquakes is available from the USGS.[3]

Most of the world's earthquakes (90 percent, and 81 percent of the largest) take place in the 40,000-km-long, horseshoe-shaped zone called the circum-Pacific seismic belt, also known as the Pacific Ring of Fire, which for the most part bounds the Pacific Plate.[4] Massive earthquakes tend to occur along other plate boundaries, too, such as along the Himalayan Mountains. 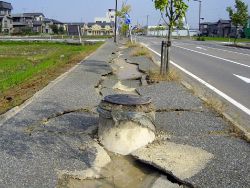 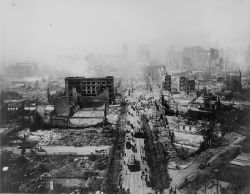 Smoldering after the 1906 San Francisco earthquake. 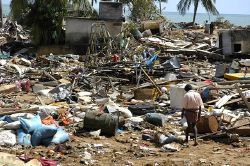 Man walking around in Ruins after Tsunami.

There are many effects of earthquakes including, but not limited to the following:

Shaking and ground rupture are the main effects created by earthquakes, principally resulting in more or less severe damage to buildings or other rigid structures. The severity of the local effects depends on the complex combination of the earthquake magnitude, the distance from epicenter, and the local geological and geomorphological conditions, which may amplify or reduce wave propagation. The ground-shaking is measured by ground acceleration.

Specific local geological, geomorphological, and geostructural features can induce high levels of shaking on the ground surface even from low-intensity earthquakes. This effect is called site or local amplification. It is principally due to the transfer of the seismic motion from hard deep soils to soft superficial soils and to effects of seismic energy focalization owing to typical geometrical setting of the deposits.

Earthquakes can cause landslides and avalanches, which may cause damage in hilly and mountainous areas.

Following an earthquake, fires can be generated by break of the electrical power or gas lines.

Soil liquefaction occurs when, because of the shaking, water-saturated granular material temporarily loses their strength and transforms from a solid to a liquid. Soil liquefaction may cause rigid structures, as buildings or bridges, to tilt or sink into the liquefied deposits.

Earthquakes may result in disease, lack of basic necessities, loss of life, higher insurance premiums, general property damage, road and bridge damage, and collapse of buildings or destabilization of the base of buildings which may lead to collapse in future earthquakes. 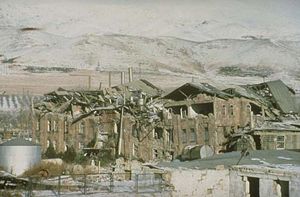 Earthquakes in mythology and religion

In Norse mythology, earthquakes were explained as the violent struggling of the god Loki. When Loki, god of mischief and strife, murdered Baldr, god of beauty and light, he was punished by being bound in a cave with a poisonous serpent placed above his head dripping venom. Loki's wife Sigyn stood by him with a bowl to catch the poison, but whenever she had to empty the bowl the poison would drip on Loki's face, forcing him to jerk his head away and thrash against his bonds, causing the earth to tremble.[7]

In Greek mythology, Poseidon was the god of earthquakes.[8]