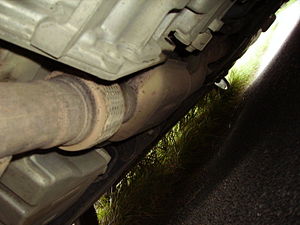 Catalytic converter on a Saab 9-5.

The catalyst reduces the activation energy by providing an alternative pathway for the reaction to occur. In so doing, the catalytic agent makes the reaction proceed faster and at a lower temperature than the uncatalyzed reaction. In addition, if a given reaction can produce a variety of products, the catalyst may help direct the reaction toward generating a specific subgroup of products.

Catalysts play essential roles in biological systems and industrial processes. In living organisms, enzymes catalyze numerous biochemical reactions that sustain life and are involved in growth and reproductive functions. In industry, catalysts are used for a wide array of manufacturing processes, including the production of ammonia, sulfuric acid, polymers, and petroleum product substitutes. In industrialized countries, perhaps the most familiar example of the use of catalysts lies in the catalytic converter, a device that breaks down harmful substances in automobile exhaust. Research into catalysis and the use of catalysts continues to be a focus of many investigators in the pure and applied sciences.

In a more general sense, the term catalyst may be applied to any agent (including a person or group) that brings about accelerated change. For example, someone may be called a "catalyst for political change."

The term catalysis was coined in 1835 by Jöns Jakob Berzelius, who noted that certain chemicals speed up a reaction. The word is derived from the Greek noun κατάλυσις, related to the verb καταλύειν, meaning "to dissolve," "annul," "untie," or "pick up."

Around the same time, the chemist Alexander Mitscherlich referred to "contact processes," and Johann Wolfgang Döbereiner spoke of "contact action." Döbereiner worked on the use of platinum as a catalyst and invented a lighter that was ignited by the action of hydrogen on a platinum sponge. This lighter, called Döbereiner's lamp, became a huge commercial success in the 1820s.

Consider the following reaction scheme, in which C represents the catalyst, A and B are reactants, and D is the product of the reaction of A and B.

Here, the catalyst (C) is consumed by the reaction in stage one, but it is regenerated in stage four. Thus, the overall reaction can be written as:

Catalysts can be either heterogeneous or homogeneous. Biological catalysts (or biocatalysts) are often considered a separate group.

A simple model for heterogeneous catalysis involves the catalyst providing a surface on which the reactants (or substrates) temporarily become adsorbed.[1] Chemical bonds in the substrate become sufficiently weakened for new bonds to be created. As the products are generated, they bind relatively weakly to the catalyst and are therefore released. Different possible mechanisms for reactions on surfaces are known, depending on how the adsorption takes place.

For example, consider the Haber process to manufacture ammonia from nitrogen and hydrogen. In this case, finely divided iron acts as a heterogeneous catalyst. As the reactant molecules (hydrogen and nitrogen) bind to the catalyst, this binding process has two effects: first, the molecules come closer together than they would be in the gas phase; and second, their internal bonds are weakened. In this manner, the catalyst makes it possible for the reactant molecules to react faster than they would if they had remained in the gas phase.

In nature, enzymes are catalysts for biochemical reactions that take place within living organisms. Most enzymes are proteins, but some enzymes—called ribozymes—are made of RNA. Some DNA molecules, called deoxyribozymes, have been found to have catalytic activity. In addition, some antibodies, usually prepared artificially, have catalytic activity and are called abzymes.

Thus, catalysts can enable reactions to take place at much faster rates, or in certain specific ways, or at lower temperatures. In addition, some reactions run only in the presence of a catalyst.

Catalysts cannot make energetically unfavorable reactions possible. They have no effect on the chemical equilibrium of a reaction, because the rates of the forward and the reverse reactions are equally affected by the catalyst.

The SI derived unit for measuring the "catalytic activity" of a catalyst is the katal (which is moles per second). In biochemistry, the catalytic activity of an enzyme is measured in terms of enzyme units.

The activity of a catalyst can also be described by the turnover number (TON). In enzymology, turnover number is defined as the maximum number of moles of substrate that an enzyme can convert to product per catalytic site (of the enzyme) per unit time. In more chemical fields, turnover number (TON) is defined as the number of moles of substrate that a mole of catalyst can convert before the catalyst becomes inactivated. The term turnover frequency (TOF) is used to refer to the turnover per unit time, as in enzymology.

Poisoning of a catalyst

A catalyst can be poisoned if another compound (similar to an inhibitor) alters it chemically or bonds to it and does not release it. Such interactions effectively destroy the usefulness of the catalyst, as it can no longer participate in the reaction that it was supposed to catalyze. Common catalyst poisons are lead, sulfur, zinc, manganese, and phosphorus.

The catalytic converter of an automobile is a well-known example of the use of catalysts. In this device, platinum, palladium, or rhodium may be used as catalysts, as they help break down some of the more harmful byproducts of automobile exhaust. A "three-way" catalytic converter performs three tasks: (a) reduction of nitrogen oxides to nitrogen and oxygen; (b) oxidation of carbon monoxide to carbon dioxide; and (c) oxidation of unburnt hydrocarbons to carbon dioxide and water.

Other examples of catalysts and their applications are as follows.

Retrieved from https://www.newworldencyclopedia.org/p/index.php?title=Catalyst&oldid=1030036
Categories:
This page was last edited on 1 January 2020, at 22:03.
Content is available under Creative Commons Attribution/Share-Alike License; additional terms may apply. See Terms of Use for details.