Jöns Jakob Berzelius (August 20, 1779 – August 7, 1848) was a Swedish chemist. Adversity in childhood fostered within Berzelius an independent spirit. He determined at first to become a clergyman but developed an interest in natural science, eventually choosing a career in medicine. Chemistry was his first love, and he described science as "the greatest joy of my life." He found the young field of chemistry in a state of disorganization and speculation, to which he applied a strict standard of experimentation and proof.

Following John Dalton's atomic theories, Berzelius observed that elements combined in definite numerical ratios. Working with the Swedish industrialist Wilhelm Hisinger, he discovered a new element, cerium. His studies of the effects of electric currents on salts led him to conclude that electricity was essential in the bonding of chemical elements. Berzelius suggested the term "protein" as the prime compound of organic substances. His system of chemical notation is basically the same one used today. Berzelius, together with Dalton and Antoine Lavoisier, is considered a father of modern chemistry.

Berzelius was born in Vaversunda in Östergötland in Sweden. His father died when he was four years old and although his mother remarried, she also died shortly thereafter. The young Berzelius was passed from aunt to uncle in what seems to have been a half-hearted effort to care for him. He felt liberated when, at age 14, he was admitted to the boarding school today known as Katedralskolan. These years saw Berzelius finding employment in a variety of areas, including tutoring and farm work. In his youth, he enjoyed outdoor life far more than the classroom, given his robust constitution and generally good health.

Scholarship assistance allowed him to enroll at Uppsala University, where he concentrated his studies on chemistry while learning the profession of medical doctor. He was at Uppsala from 1796 to 1801. There, he learned chemistry from Anders Gustaf Ekeberg, the discoverer of tantalum.

Following his graduation from university, Berzelius moved to Stockholm, where he worked as a teacher at the School of Surgery. To survive, he earned money serving as a doctor to the poor. At one point, he worked with a physician in the Medevi mineral springs where he conducted a thorough chemical analysis of the spring water. In the course of his ongoing medical studies, Berzelius examined the effect of galvanic current on several diseases. During this period, a mine owner, Wilhelm Hisinger, discovered his analytical abilities and provided him with a laboratory.

Not long after arriving in Stockholm, he wrote a chemistry textbook for his medical students. From then onward, he began a long and fruitful career in chemistry. While conducting experiments in support of the textbook he discovered the law of constant proportions, which showed that inorganic substances are composed of different elements in constant proportions by weight.

By 1818, he began to explore the basic nature of matter and built on the atomic theory proposed by the British chemist John Dalton. Berzelius experimented with the notion that the stuff of the natural world is composed of basic elements and that each element can be reduced to its basic unit, the atom, which has a specific weight for each element. Based on this idea, in 1828 he compiled a table of relative atomic weights, where oxygen was set to 100, and which included 45 of the 49 elements known at that time. His work provided substantial evidence in favor of the molecular and atomic theory: that inorganic chemical compounds are composed of atoms combined in whole number amounts. In discovering that atomic weights are not integer multiples of hydrogen's atomic weight, Berzelius also disproved Proust's hypothesis that elements are built up from atoms of hydrogen.

To aid his experimental work, he developed a system of chemical notation in which the elements were given simple written labels—such as O for oxygen, or Fe for iron. When found in compounds, their proportions were noted by numbers. This is the same basic system used today, the only difference being that instead of the subscript number used today (such as H2O), Berzelius used superscripts.

Berzelius is credited with identifying the chemical elements silicon, selenium, thorium, and cerium. Students working in his laboratory also discovered lithium and vanadium.

Berzelius is also credited with originating the term "polymer," though his original definition differs dramatically from modern usage. Berzelius coined the term in 1833 to describe organic compounds that shared identical empirical formulas but differed in overall molecular weight, the larger of the compounds being described as "polymers" of the smallest.

Berzelius had an impact on biology as well. He was the first person to make the distinction between organic compounds (those containing carbon), and inorganic compounds. In particular, he advised Gerhardus Johannes Mulder in his elemental analyses of organic compounds such as coffee, tea, and various proteins. The term "protein" itself was coined by Berzelius, after Mulder observed that all proteins seemed to have the same empirical formula and might be composed of a single type of (very large) molecule. Berzelius proposed the name because the material seemed to be the primitive substance of animal nutrition that plants prepare for the herbivores.

After initially denying the fact that chlorine is an element, which was presented by Davy in 1810, the dispute ended in Berzelius' admission that it must be true after the discovery of iodine in 1813. 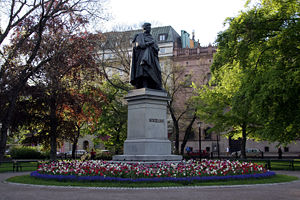 A statue of Berzelius stands in the center of Berzelii Park, Stockholm

Berzeliusskolan, a school situated next to his alma mater Katedralskolan, is named for him.

His contributions to the science of chemistry included research with both organic and inorganic materials and were foundational in the development of modern chemical analysis. His commitment to pure research science was evidenced by his view that few discoveries would be made if science were only seen as a means to an end. In 1818, he was elected permanent secretary of the Royal Swedish Academy of Sciences. There Berzelius established a reputation as the revitalizer of that institution.

Berzelius became chairman of the Public Health Committee of the Parish of Adolph Fredrik during the cholera epidemic of 1834. He distinguished himself by battling the disease with the best practices then available to the health profession, in spite of opposition from those who claimed the causes to be astrological and inevitable.

In 1835, at the age of 56, he married Elisabeth Poppius, the 24-year-old daughter of a Swedish cabinet minister.

Retrieved from https://www.newworldencyclopedia.org/p/index.php?title=Jöns_Jakob_Berzelius&oldid=1080884
Categories:
Hidden category:
This page was last edited on 4 October 2022, at 21:46.
Content is available under Creative Commons Attribution/Share-Alike License; additional terms may apply. See Terms of Use for details.