Thorium (chemical symbol Th, atomic number 90) is a naturally occurring, slightly radioactive metal and is a member of the actinide series. It can be used in magnesium alloys to impart strength, heat-resistant ceramics, gas tungsten arc welding electrodes, and in coating tungsten wire for electronic equipment. It is a fertile material for producing nuclear fuel, and is under consideration as an alternative nuclear fuel, in place of uranium. In addition, thorium dioxide may be used as a catalyst for various chemical reactions, in mantles for portable gas lights, and in high-quality glass lenses for cameras and scientific instruments. 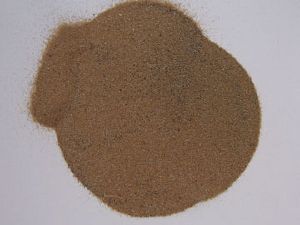 Monazite, a rare-earth-and-thorium-phosphate mineral, is the primary source of the world's thorium.

Thorium is found in small amounts in most rocks and soils, where it is about three times more abundant than uranium, and is about as common as lead. Soil commonly contains an average of around 12 parts per million (ppm) of thorium. Thorium occurs in several minerals, the most common being the rare earth-thorium-phosphate mineral, monazite, which contains up to about 12 percent thorium oxide. There are substantial deposits in several countries. 232Th decays very slowly (its half-life is about three times the age of the earth) but other thorium isotopes occur in the thorium and uranium decay chains. Most of these are short-lived and hence much more radioactive than 232Th, though on a mass basis they are negligible. India is believed to have 25 percent of the world's thorium reserves.[1]

Current estimates (in tons) of thorium mineral reserves are as follows.[2]

Thorium was discovered in 1828 by the Swedish chemist Jöns Jakob Berzelius, who named it after Thor, the Norse god of thunder. The metal had virtually no uses until the invention of the lantern mantle in 1885.

The name ionium was given early in the study of radioactive elements to the 230Th isotope produced in the decay chain of 238U before it was realized that ionium and thorium were chemically identical. The symbol Io was used for this supposed element.

Thorium is an inner transition metal in the actinide series. It follows actinium in period seven of the periodic table.

When pure, thorium is a silvery white metal that retains its luster for several months. However, when it is contaminated with the oxide, thorium slowly tarnishes in air, becoming gray and eventually black. Thorium dioxide (ThO2), also called thoria, has one of the highest melting points of all oxides (3300°C). When heated in air, thorium metal turnings ignite and burn brilliantly with a white light.

Applications of thorium dioxide (ThO2)

Thorium as a nuclear fuel

Thorium, as well as uranium and plutonium, can be used as fuel in a nuclear reactor. Although not fissile itself, 232Th will absorb slow neutrons to produce uranium-233 (233U), which is fissile. Hence, like 238U, it is fertile.

In one significant respect, 233U is better than the other two fissile isotopes used for nuclear fuel, 235U and plutonium-239 (239Pu), because of its higher neutron yield per neutron absorbed. Given a start with some other fissile material (235U or 239Pu), a breeding cycle similar to, but more efficient than that currently possible with the 238U-to-239Pu cycle (in slow-neutron reactors), can be set up. The 232Th absorbs a neutron to become 233Th which normally decays to protactinium-233 (233Pa) and then 233U. The irradiated fuel can then be unloaded from the reactor, the 233U separated from the thorium (a relatively simple process since it involves chemical instead of isotopic separation), and fed back into another reactor as part of a closed nuclear fuel cycle.

There are, however, several problems with the use of thorium as a nuclear fuel. They include:

Thus, much development work is required before the thorium fuel cycle can be commercialized.

Nevertheless, the thorium fuel cycle, with its potential for breeding fuel without the need for fast neutron reactors, holds considerable potential for the long term. Thorium is significantly more abundant than uranium, so it is a key factor in the sustainability of nuclear energy.

India, which has about 25 percent of the world's total reserves,[1] has planned its nuclear power program to eventually use thorium exclusively, phasing out uranium as an input material. This ambitious plan uses both fast and thermal breeder reactors. The Advanced Heavy Water Reactor and KAMINI reactor are efforts in this direction.