Tungsten (formerly wolfram) is a chemical element with the symbol W and atomic number 74. This heavy metal, steel-gray to white in color, is remarkable for its robust physical properties, making it very useful for many applications. Its melting point is higher than that of any other non-alloy, and it is therefore used in filaments in light bulbs and heating elements in electrical furnaces. Its extreme hardness makes it suitable for use in "high speed steel," which can cut materials at higher speeds than carbon steel, and in "superalloys" that perform well even at elevated temperatures. Tungsten carbide, a compound of tungsten and carbon, is one of the hardest known substances and is the most common material to make milling and turning tools. Calcium and magnesium tungstates are widely used in fluorescent lighting, and tungsten oxides are used in paints and ceramic glazes. 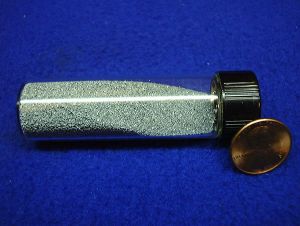 Tungsten was first hypothesized to exist by Peter Woulfe in 1779, when he examined the mineral wolframite and concluded it must contain a new substance. In 1781, Carl Wilhelm Scheele ascertained that a new acid could be made from tungstenite. Scheele and Torbern Bergman suggested the possibility of obtaining a new metal by reducing this acid, named tungstic acid. In 1783, two brothers, José and Fausto Elhuyar, found an acid in wolframite that was identical to tungstic acid. In Spain later that year, the brothers succeeded in isolating tungsten from the acid, through a chemical process called reduction, using charcoal. They are credited with discovering the element.

In World War II, tungsten played an enormous role in background political dealings. The metal's resistance to high temperatures, as well as the extreme strength of its alloys, made tungsten a very important raw material for the weapons industry. Thus both sides in the war sought the element, putting pressure on Portugal, the main European source of wolframite ore.

Tungsten is found in the minerals wolframite (iron-manganese tungstate, FeWO4/MnWO4), scheelite (calcium tungstate, CaWO4), ferberite, and hübnerite. Important deposits of these minerals have been found in California and Colorado in the United States, and in the nations of Bolivia, China, Portugal, Russia, and South Korea. China produces about 75 percent of the world's supply. The metal is commercially produced by reducing tungsten oxide with hydrogen or carbon.

World tungsten reserves have been estimated at 7 million t W. It has been suggested that 30 percent of the reserves are wolframite and 70 percent are scheelite ores. Unfortunately, most of these reserves are not economically workable, so far. At our current annual consumption rate, these reserves will last for only about 140 years. Another factor that controls the tungsten supply is scrap recycling of tungsten, which has been proven to be a very valuable source.

Tungsten is a chemical element classified as a transition metal. Its symbol, W, is taken from the Latin word, wolframium. In the periodic table, it lies in period 6, between tantalum (Ta) and rhenium (Re).

The pure metal is hard, with a steel-gray to tin-white color. When impure, it is brittle and hard to work with, but in the pure form it can be cut with a hacksaw. In addition, it can be worked by forging, drawing, or extruding.

Of all metals, this element has the highest melting point (3422° C or 6192° F) and lowest vapor pressure. It also has the highest tensile strength (the maximum stress it can withstand before deformation or breakage) at temperatures above 1650° C (3000° F). It is extremely resistant to corrosion and can be attacked only slightly by most mineral acids. When exposed to air, a protective oxide is formed on the surface of the metal, but tungsten can be oxidized more fully at high temperature. When alloyed in small quantities with steel, tungsten greatly increases the hardness of steel.

Naturally occurring tungsten consists of five radioactive isotopes, but they have such long half-lives that they can be considered stable. All five can decay into isotopes of hafnium-72 by the emission of alpha particles (corresponding to nuclei of helium-4). Alpha decay has been observed (in 2003) in only 180W, the lightest and rarest of these isotopes. On average, two alpha decays of 180W occur in one gram of natural tungsten per year.

In chemical terms, tungsten forms compounds in which its "oxidation state" ranges between +2 and +6, but the most common is +6. (Oxidation state is a measure of the degree of oxidation of an atom in a compound; it is the hypothetical electrical charge an atom would have if its bonds to all other atoms in the compound were entirely ionic.) Tungsten typically combines with oxygen to form the yellow tungstic oxide (WO3). This oxide dissolves in aqueous alkaline solutions to form tungstate ions (WO42−). Some useful compounds of tungsten are described below.

Tungsten carbide (WC or W2C) is a chemical compound containing tungsten and carbon. Its extreme hardness makes it useful in the manufacture of cutting tools, abrasives, and bearings, as a cheaper alternative to diamond. It is also used as a scratch-resistant material for jewelry, including watch bands and wedding rings.

Tungsten(VI) fluoride (WF6), also known as tungsten hexafluoride, is a colorless gas. It is nonflammable, but highly corrosive and toxic. It is produced by the reaction of fluorine gas with tungsten metal. The gas is most commonly used in the production of semiconductor circuits and circuit boards, through a process called "chemical vapor deposition."

Tungsten oxide (or tungstic oxide, WO3) is a yellow compound of tungsten and oxygen, with a melting point of 1473° C. It is synthesized by heating tungsten or other tungsten oxides in excess oxygen. It is commonly used in the manufacture of alloys, ceramics, pigments, and fireproofing. Another oxide, brown WO2, is made by reducing WO3 with hydrogen (H2).

Phosphotungstic acid (PTA), also called tungstophosphoric acid or tungsten hydrogen oxide phosphate (HPW), is a chemical with the formula 12 WO3 . H3PO4 . x H2O. It has the appearance of small, colorless-grayish or slightly yellow-green crystals, with a melting point of 89° C (24 H2O hydrate). It is odorless and well soluble in water (200 g/100 ml). It is not especially toxic but is a mild acidic irritant.

Phosphotungstic acid is used in histology as a component for staining of cell specimens. It binds to fibrin, collagen, and fibers of connective tissues, and replaces the anions of dyes from these materials, selectively decolorizing them. In addition, it is opaque for electrons and is therefore useful as a negative stain for viruses, nerves, polysaccharides, and other biological materials for imaging by a transmission electron microscope.

Aqueous tungstate solutions are noted for the formation of polyoxoanions (anions that contain tungsten and oxygen) under neutral and acidic conditions. As tungstate is progressively treated with acid, it first produces the soluble, metastable "paratungstate A" anion, W7O246−. After hours or days, paratungstate A converts to the less soluble "paratungstate B" anion, H2W12O4210−. Further acidification produces the very soluble "metatungstate" anion, H2W12O406−, after equilibrium is reached. The metatungstate ion exists as a symmetric cluster of twelve tungsten-oxygen octahedra known as the "Keggin" anion. Many other polyoxoanions exist as metastable species. The inclusion of a different atom such as phosphorus in place of the two central hydrogens in metatungstate produces a wide variety of the so-called "heteropolyanions."

In the body, a class of enzymes called oxidoreductases use tungsten in a complex with the organic compound pterin. (This is similar to the use of molybdenum by these enzymes.)

On August 20, 2002, officials representing the U.S.-based Centers for Disease Control and Prevention (CDC) announced that urine tests on leukemia patient families and control group families in the Fallon, Nevada, area had shown elevated levels of the metal tungsten in the bodies of both groups. Sixteen recent cases of cancer in children were discovered in the Fallon area, which has now been identified as a cancer cluster. It should be noted, however, that most of the cancer victims were not long-time residents of Fallon. In addition, Dr. Carol H. Rubin, a branch chief at the CDC, said data demonstrating a link between tungsten and leukemia is not available at present.