Lead (chemical symbol Pb, atomic number 82) is a soft, heavy metal. Bluish white when freshly cut, it tarnishes to dull gray when exposed to air. It is widely available and can be readily converted into various shapes. For these reasons, lead has been used during much of human history. Lead and its compounds are also poisonous, so they are no longer used in paints, gasoline, or water pipes. Nonetheless, they continue to be used for many other purposes. For instance, lead is a constituent of lead-acid batteries, solder, pewter, and fusible alloys. It is also used to make bullets and shielding to protect against ionizing radiation. Lead (II) acetate is used to fix dyes on textiles, lead (II) oxide is used in the manufacture of some types of glass, and lead sulfide is used in sensors of infrared light.

Lead is widely distributed in the world and is easy to extract and work with. For these reasons, humans have used it for at least 7,000 years. In the early bronze age, it was used with antimony and arsenic. Lead is mentioned in the Book of Exodus. Lead pipes that bear the insignia of Roman emperors are still in service.

Alchemists thought that lead was the oldest metal and associated it with the planet Saturn. One of their goals was to convert lead into gold. Although they failed to achieve this goal, they discovered the properties of a variety of substances and performed many chemical reactions.

Lead is also toxic, and lead poisoning was recognized even by the ancients. In the twentieth century, the use of lead in paint pigments was ended because of the danger of lead poisoning, especially to children [1] [2] [3]. By the mid-1980s, a significant shift in lead end-use patterns had taken place. Much of this shift was a result of the U.S. lead consumers' compliance with environmental regulations that significantly reduced or eliminated the use of lead in non-battery products, including gasoline, paints, solders, and water systems. Recently, lead use is being further curtailed by the "Restriction of Hazardous Substances" directive. 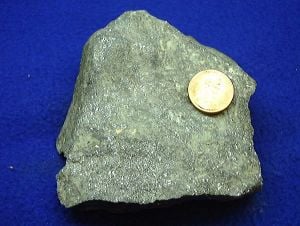 Native lead does occur in nature, but it is rare. Currently, lead is usually found in ores with zinc, silver, and (most abundantly) copper, and is extracted together with these metals. The main lead mineral is galena (lead sulfide, PbS), which contains 86.6 percent lead. Other common varieties are cerussite (lead carbonate, PbCO3) and anglesite (lead sulfate, PbSO4). More than half the lead in current use comes from recycling.

Lead ore is mined by drilling or blasting operations, then crushed and ground. Lead is extracted from the ore by specialized metallurgical processes. A process called froth flotation is used to separate the lead mineral (and other minerals) from the waste rock to form a concentrate. The concentrate, which may contain 50–60 percent lead, is dried, heated (in the process of pyrometallurgy), and smelted, and a 97 percent lead concentrate is obtained. The lead is then cooled in stages, causing the lighter impurities (dross) to rise to the surface from which they are removed. The molten lead bullion is refined by additional smelting, when air is passed over the lead. This process forms a slag layer that contains the remaining impurities and produces 99.9 percent pure lead.

Lead is a chemical element that gets its symbol, Pb, from its Latin name, plumbum. The English word "plumbing" also derives from this Latin root.

In the periodic table, lead lies below tin (Sn) in group 13, and between thallium (Tl) and bismuth (Bi) in period 6. It is classified as a "poor metal" or "post-transition metal." Its atomic number of 82 indicates that there are 82 protons in the nucleus of each atom of lead. This gives lead the highest atomic number of all stable (nonradioactive) elements (it should be noted, however, that bismuth, with an atomic number of 83, has a half-life so long it can be considered stable).

Lead is a very soft but dense metal, and a poor conductor of electricity. It is also highly malleable (can be shaped with a hammer or rollers), ductile (can be drawn into wires), and easy to smelt. As it is highly resistant to corrosion, it is used to contain corrosive liquids such as sulfuric acid. Lead can be toughened by adding a small amount of antimony or other metals to it. Lead is also poisonous.

Given that three of the four stable isotopes are radiogenic and formed from the decay of heavier elements that were formed billions of years ago, lead is much more common and cheaper than most heavy elements. The cost has been further lowered in recent years with the phasing out of lead in many processes, including gasoline and paint.

Lead (II) acetate (Pb(CH3COO)2) is a white, crystalline substance with a sweetish taste. It is soluble in water and glycerin. It is also known as lead diacetate, plumbous acetate, sugar of lead, and salt of Saturn. It is used as a reagent to make other lead compounds. In low concentrations, it is the principal active ingredient in progressive types of hair coloring dyes. Lead (II) acetate is also used as a mordant (fixative of dyes) in textile printing and dyeing, and as a drier in paints and varnishes.

Lead (II) oxide (PbO), or litharge, is a yellow oxide of lead, created by heating lead in air. It is used in the manufacture of paints and in glass, as well as in vulcanization of rubber. A mixture with glycerin sets to a hard, waterproof cement that has been used to join the flat glass sides and bottoms of aquaria [7].

Lead sulfide (PbS) and several other lead salts are used in detection elements in various infrared (IR) sensors. Of these, lead sulfide is one of the oldest and most commonly used. In addition, lead sulfide, lead selenide, and lead telluride are semiconductors.

Lead and its compounds are toxic substances. Lead poisoning—also known as saturnism, plumbism, or painter's colic—is associated with increased levels of lead in blood serum.

The historical use of lead acetate (also known as sugar of lead) by the Roman Empire as a sweetener for wine is considered by some to be the cause of the dementia that affected many Roman emperors. Some lead compounds, because of their sweetness, were once used by candy makers. This practice has been banned in industrialized nations, but there was a recent scandal involving lead-laced Mexican candy being eaten by children in California [8].

Lead has no known biological role in the body. The toxicity comes from its ability to mimic other biologically important metals, particularly calcium, iron, and zinc. Lead is able to bind to and interact with the same protein molecules as these metals, after which those molecules fail to function normally.

In humans, lead toxicity often causes the formation of a bluish line along the gums, which is known as the "Burtons's line." A direct link between early lead exposure and extreme learning disability has been confirmed by multiple researchers and child advocacy groups.

The concern about lead's role in mental retardation in children has brought about widespread reduction in its use. Paint containing lead has been withdrawn from sale in industrialized countries, though many older houses may still contain substantial lead in their old paint. It is generally recommended that old paint should not be stripped by sanding, as this generates inhalable dust.

Lead salts used in pottery glazes have on occasion caused poisoning, when acid drinks, such as fruit juices, have leached lead ions out of the glaze. It has been suggested that what was known as "Devon colic" arose from the use of lead-lined presses to extract apple juice in manufacturing cider. Lead is considered particularly harmful for a woman's reproductive ability. For that reason, many universities do not hand out lead-containing samples to women for instructional laboratory analyses.

The earliest pencils actually used lead, but for the last couple of centuries, "pencil leads" have been made from graphite, a naturally occurring form (allotrope) of carbon.

Lead as a soil contaminant is a widespread issue, because lead may enter the soil by the leakage of leaded gasoline from underground storage tanks, or through wastestreams of lead paint, or lead grindings from certain industrial operations.

Although the most important part of treating lead poisoning is decreasing exposure to lead, there are some "chelating agents" (such as DMSA and EDTA) can be used to bind lead and reduce the level of lead in blood serum.

There are also homeopathic remedies for lead poisoning. In his reference book, Homeopathic Remedies, Asa Herschoff, M.D. claims that Alumina helps antidote and eliminate lead from the body, where specific symptoms include mental confusion, memory loss, dullness, lethargy, and loss of identity, as well as high blood pressure and kidney disease. Causticum is also a general antidote, particularly for nerve paralysis and urinary weakness. Though homeopathy is not universally acknowledged as an effective mode of healing in the United States, persons seeking information on flushing lead out of the body should be aware of this option.