Huddie William Ledbetter (January 23, 1888 - December 6, 1949), better known as Leadbelly or Lead Belly, was an American folk musician, notable for his clear and forceful singing, his powerful use of the 12-string guitar, and the rich songbook of folk standards which he introduced. In addition to the guitar, he could also play the piano, mandolin, harmonica, violin, concertina, and accordion.

Lead Belly was one of the most colorful, albeit notorious figures in American folk music. After spending time in and out of southern prisons for violent crimes, including murder and attempted murder, he was discovered in 1933 in the Angola State Prison in Louisiana by folklorists John and Alan Lomax. Gaining early release, Lead Belly moved to New York under the patronage of the Lomaxes, where he eventually befriended well-known folk singers such as Pete Seeger and Woodie Guthrie and became particularly popular in left-wing folk music circles. Lead Belly's repertoire drew from an extraordinary range of folk music, including prison work songs, field hollers, traditional songs, blues, and popular Tin Pan Alley tunes.

The topics of Lead Belly's music were equally wide ranging, including songs about women, cowboys, prison, sailors, cattle herding, racism, natural disaster, and the news makers of the day. His most famous songs, "Good Night Irene," "Pick a Bale of Cotton," "Midnight Special," "Roberta," and others, express a plaintive longing for human bonding and explore the tragedy of separation that Lead Belly himself experienced, largely through his own reckless and violent life. Alan Lomax would come to regard Lead Belly as the single greatest repository of American folk music he ever encountered in a lifetime field work. 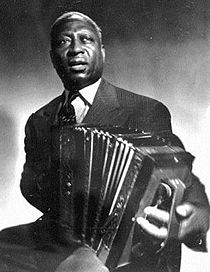 Once a matter of debate, Huddie Ledbetter's birthday is now generally recognized as January 23, based mainly on his World War II Draft registration of 1942, which he, himself, helped fill out. The year of his birth is more contentious. He gave his birth year as 1889 when he registered for the Draft, but other genealogical evidence suggests he was born January 23, 1888.

In any case, Lead Belly was born to Wesley and Sallie Ledbetter as Huddie William Ledbetter, on a plantation near Mooringsport, Louisiana. The family moved to Leigh, Texas, when he was five. It was here that he received his first instrument, an accordion, from his uncle. By 1903, Huddie was already a "musicaner," a singer and guitarist of some note. He performed for nearby Shreveport, Louisiana audiences in St. Paul's Bottom, a notorious red light district in the city. He began to develop his own style of music after being exposed to a variety of musical influences on Shreveport's Fannin Street, a row of saloons, brothels, and dance halls in the Bottom.

At the time of the 1910 census, he was still officially listed as "Hudy," and was living next door to his parents with his first wife, Aletha "Lethe" Henderson, who was then 17–years–old, and would have been 15 at the time of their marriage in 1908. By his early 20s, after fathering at least two children, he left home to find his living as a guitarist (and occasionally as a laborer). On the road, he was anything but faithful to his wife and would later brag that as a youth he would "make it" with eight to ten women a night.

Ledbetter's boastful spirit and violent tendencies sometimes led him into trouble with the law, and in January 1918 he was imprisoned in Dallas, Texas for the second time, after killing one of his relatives, Will Stafford, in a fight. In prison, he entertained guards and fellow prisoners with his playing and singing and thus won high marks for good behavior. He was released seven years into his 20-year sentence, reportedly after writing a song appealing to Governor Pat Morris Neff for his freedom and by appealing to Neff's strong religious values: 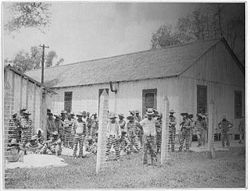 Please, Governor Neff, Be good 'n' kind
Have mercy on my great long time...
I don't see to save my soul
If I don't get a pardon, try me on a parole...
If I had you, Governor Neff, like you got me
I'd wake up in the mornin' and I'd set you free

In 1930, however, Ledbetter was back in prison, this time in Louisiana for attempted homicide. It was in the Louisiana State Penitentiary, in July 1933, that Huddie first encountered folklorist John Lomax and his son Alan, who were collecting recordings for the Library of Congress. The two men were enchanted by his talent, passion, and singularity as a performer. They recorded hundreds of his songs on portable recording equipment. The following year Ledbetter was once again pardoned, this time after a petition for his early release was taken to Louisiana Governor O.K. Allen by the Lomaxes.

Ledbetter acquired his famous nickname while he was imprisoned in Louisiana. His fellow inmates dubbed him "Lead Belly" as a play on his last name and a testament to his physical toughness. By the time he met the Lomaxes, he was using the nickname as a pseudonym, and the name stuck ever since. 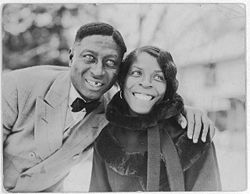 Indebted to the Lomaxes, Lead Belly allowed Alan Lomax to take him under his wing. In late 1934, he migrated to New York City with Lomax. In 1935, he married Martha Promise and began recording with the American Record Corporation (ARC). However, the ARC insisted he record blues songs rather than the folk music with which he was more proficient. He achieved little commercial success with these records and struggled financially. His inclination toward violence had mellowed somewhat, but after he reportedly threatened Lomax with a knife their friendship came to an end. By 1939, he was back in jail for assault.

Upon his release in 1940, however, Lead Belly returned to a surging New York folk scene and befriended such early folk stars as Woody Guthrie and the young Pete Seeger. Their association would provide the former convict with a willing audience for his style of singing and playing, and he became a popular performer with New York left-wing and trade union folk audiences. During the first half of the decade, he recorded for RCA, the Library of Congress, and for Moe Asch, the future founder of Folkways Records.

Lead Belly was unique among black recording artists of his day. His driving vocal style and equally powerful strumming of his 12-string guitar were his trademarks, along with his one-of-a-kind renditions of folk songs such as "Midnight Special," "John Henry," "Cotton Fields," "The Boll Weevil Song," "Careless Love," "John Hardy," and his signature song, "Good Night Irene," considered by many to be his own composition but in reality a case of the folk process resulting in an original version of an older song. 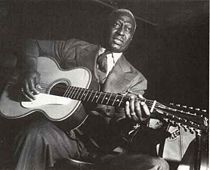 Influenced by his association with Seeger, Guthrie, and others, Lead Belly also recorded a large number of topical songs, including "Bourgeois Blues," "Jim Crow Blues," "Scottsboro Boys," and "Hitler Song." He often performed with his new friends at hootenannies and union halls in support of left-wing causes. Throughout his career, he failed to gain a wide audience among either urban or rural blacks, but remained popular in folk circles.

In 1944, he headed to California, where he recorded strong sessions for Capitol Records. In 1949, he began his first European tour, but fell ill before its completion, and was diagnosed with amyotrophic lateral sclerosis, or Lou Gehrig's Disease. Lead Belly died later that year in New York City, and was buried in Mooringsport, eight miles west of Blanchard, Louisiana, in Caddo Parish, in the Shiloh Baptist Church cemetery.

Lead Belly's recordings for the Library of Congress and commercial record companies memorialized and popularized some of America's most beloved folk songs, including such standards as "Midnight Special," "Cotton Fields," and "Good Night Irene." His vast songbook, much of which he adapted from previous sources, has provided material for numerous folk, country, pop and rock acts since his time, including: 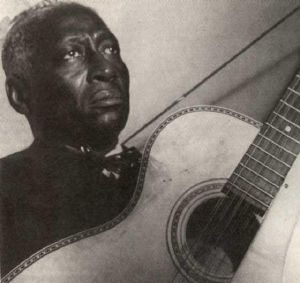 In 1976, a film chronicling Leadbelly's life was released under the title Leadbelly. The film was directed by Gordon Parks, and starred Roger E. Mosley in the title role. It focuses on the troubles of Leadbelly's youth in the segregated South, including his time in prison and his efforts to use his music to gain release. To date the film has not been released on home video. In 1991 a tribute entitled A Vision Shared: A Tribute To Woody Guthrie & Leadbelly was released by Sony in both video and audio formats. It features performances of Lead Belly songs by Little Richard, Taj Mahal, Sweet Honey In The Rock, and Brian Wilson.

The Library of Congress recordings

Lead Belly's complete Library of Congress recordings, done by John and Alan Lomax from 1934 to 1943, were released in a six volume series by Rounder Records in the early-to-mid 1990s: 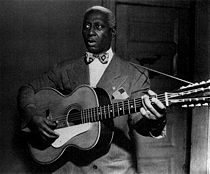 Another shot of Lead Belly during his last recording session in 1948.

Retrieved from https://www.newworldencyclopedia.org/p/index.php?title=Lead_Belly&oldid=1083825
Categories:
Hidden category:
This page was last edited on 25 October 2022, at 18:43.
Content is available under Creative Commons Attribution/Share-Alike License; additional terms may apply. See Terms of Use for details.