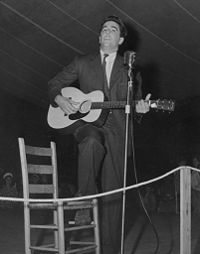 Alan Lomax (January 31, 1915 – July 19, 2002) was an American folklorist, musicologist, author, and producer, and one of the most important field collectors of folk music of the twentieth century. Lomax recorded thousands of songs in the United States, Great Britain, the West Indies, Italy, and Spain. His field trips into the American South in the thirties and forties played a seminal role in the emergence of the blues and African American folk music in the global marketplace. Lomax discovered such influential artists as the then-unknown McKinley Morganfield (Muddy Waters), Huddie Leadbetter (Leadbelly), and Woody Guthrie. In his field work, he preserved both the performances and narrative histories of styles that, in popularized form, would come to dominate popular music in later decades.

Lomax was a long-time advocate for the civil rights and cultural recognition of African Americans, organizing entertainment for the Poor People's March on Washington in 1968, and some years earlier co-producing the album, Freedom in the Air, documenting the Albany, Georgia, civil rights movement. Lomax's research into folk music roots, systematized in a discipline he call Cantometrics, laid the groundwork for the emergence of world music as a popular genre.

Lomax's work as a field collector underscored his belief that music (and dance) were universal expressions of human creativity and capable of breaking down barriers of prejudice. His lifetime work to bring recognition to unknown and unacknowledged folk art traditions has had a lasting impact on society's understanding and appreciation of our multicultural world.

Lomax served as consultant to Carl Sagan for the audio collection included in the 1977 Voyager space probe, ensuring that the world’s music heritage, from anguished blues to orchestral masterworks, would serve as an eloquent emissary of human civilization to remote space. He received the National Medal of Arts from U.S. President Ronald Reagan in 1984.

Alan Lomax was born in Austin, Texas, the son John Lomax, an English professor with a then-unorthodox interest in indigenous folk music of the South. The elder Lomax was the author of the best-selling Cowboy Songs and Other Frontier Ballads (1910) and discovered and recorded the now-standard "Home on the Range" in early field work. He also had a particular fascination with the varied music traditions of rural southern blacks. For both father and son, the blues, field hollers, and prison work songs of the South were aesthetically satisfying and worthy of study. The music emerged from the era of slavery and retained vestiges of African origins in its rhythms and timbre, giving plaintive expression to experiences of oppression, cultural dislocation, and anomie.

In the summer of 1933, the elder Lomax was commissioned by the Library of Congress to document southern black folk music traditions for the library’s Archive of American Folk Music, and seventeen-year-old Lomax joined his father (and later the black writer and folklorist Zora Neale Hurston) to record the laborers, church congregants, prison inmates, and itinerant musicians in the Deep South. They eventually gathering thousands of field recordings throughout the United States, as well as in Haiti and the Bahamas.

Demonstrating serious interest and respect for the music of blacks in the 1930s was not only exceptional but dangerous. In the South, custom dictated demeaning racial subservience of blacks toward whites, and shaking hands or socializing between races was forbidden. Despite threats of violence and imprisonment, Lomax penetrated into the world of the southern black, winning trust across volatile racial fault lines. Technological challenges added to the ordeal, as the researchers had to haul a large, cumbersome recording apparatus, which further broadcast the peculiar endeavor to suspicious white southerners.

The technology of recording was still relatively new. Experimental recordings of folk music had been made as early as the 1890s, but advances by the 1930s brought superior sound fidelity than earlier efforts. Prior attempts to document southern black music using formal notations based on the European classical model, moreover, were inadequate to render the unconventional tempos and blue notes of the folk performances.

Among the legendary encounters in Lomax's early field work was the discovery of the itinerant musician Huddie Ledbetter, known familiarly as Leadbelly, in Angola Penitentiary in Louisiana, serving time for manslaughter. The Lomaxes came to regard Ledbetter as the greatest single repository of American folk songs, including standards like "Goodnight Irene," "The Rock Island Line," and "The Midnight Special." Anxious for clemency, Leadbelly famously recorded for an appeal for pardon which the Lomaxes took to the governor's mansion. Whether due to the song (as legend has it) or other reasons, the singer was released a few months later and went north with the Lomaxes and gained wide popularity as an authentic voice of southern black folk tradition.

In 1937, Lomax was appointed as head of the Library of Congress' Archive of American Folk Song, and in 1939, while doing graduate work in anthropology at Columbia University, he produced the first of several radio series for CBS, which introduced regional American folk artists like Woody Guthrie, Leadbelly, the Golden Gate Quartet, Burl Ives, and Pete Seeger to national audiences. Lomax published books and produced records, broadcasts, and concert series that introduced blues, flamenco, calypso, and southern folk music, all still relatively unknown genres. “The main point of my activity,” Lomax once remarked, “was… to put sound technology at the disposal of The Folk, to bring channels of communication to all sorts of artists and areas.”[1]

In 1940, Lomax recorded a series of interviews and solo performances with the pioneering New Orleans jazz pianist Jelly Roll Morton, who had fallen into obscurity in Washington, DC. The interview provided a nearly unique examination of the emergence of jazz (Morton claimed to have intended it) in turn-of-the-century New Orleans and was published to critical acclaim as Mister Jelly Roll (1950). Lomax's subsequent recordings with Leadbelly and Woody Guthrie captured not only the music but the lives, personalities, and times of these celebrated folk artists. Lomax's 1947 interview and performance session with blues legends Memphis Slim, Big Bill Broonzy, and Sonny Boy Williamson, Blues in the Mississippi Night, was reissued by Rounder Records in 2002.

In 1950, Lomax left the United States to avoid being targeted for his left of center political views during the McCarthy era. He lived in England, studying British folk music under a Guggenheim fellowship but did field recordings throughout Europe. His survey of Italian folk music with Diego Carpitella, conducted in 1953 and 1954, helped capture a multitude of important traditional folk styles shortly before they disappeared. The pair amassed one of the most representative folk song collections of any culture. From Lomax's Spanish and Italian recordings emerged one of the first theories explaining the types of folk singing that evolved in particular areas, a theory that incorporates work style, the environment, and the degrees of social and sexual freedom.

His recordings in England, Scotland, Ireland, and Italy were edited and produced for an eighteen-volume anthology of world folk music for Columbia Records (predating a UNESCO world music series by several years). These recordings, broadcast through BBC radio and television, introduced listeners to British and world folk music and laid the foundations for folk music revivals in those countries.

Returning to the United States in 1958, Lomax took two extended field trips through the South, and in 1962, he made field recordings of music, interviews, and story-songs in the Eastern Caribbean. In 1960, Lomax published the groundbreaking Folk Songs of North America (Doubleday), which underscored his interest in the relationship of folk song style and culture.

Documenting correspondences between music and culture became Lomax's life work from this time. He settled in New York, and from 1962 until 1989, he founded and then directed the Cantometrics and Choreometrics projects at Columbia University. He then moved to Hunter College, where he founded and directed the Association for Cultural Equity (AEC) until 1996.

Lomax suffered a stroke in 1996, while at work on a worldwide multimedia database that he called the Global Jukebox. He died in 2002.

Lomax's pioneering field work won him greater visibility in his later life. In 1986, he received the National Medal of the Arts from President Reagan at a White House ceremony. In 1990, he produced the five-part American Patchwork series aired on PBS, and in 1993, he published the autobiographical book, The Land Where the Blues Began, which won the National Book Critics Circle Award and the Ralph J. Gleason Music Book Award. In 1997, Rounder Records began the monumental project of digitally remastering and reissuing Lomax's historic field recordings. The Alan Lomax Collection features a projected 150 titles drawn from the archives at AEC. Lomax also received a Library of Congress Living Legend award in 2000, an honorary doctorate of philosophy from Tulane in 2001, and a posthumous Grammy Trustees Award for his lifetime achievements in 2003.

In March 2004, the American Folklife Center in the Library of Congress acquired the entire Alan Lomax Collection housed at Hunter College, including more than 5,000 hours of sound recordings, 400,000 feet of motion picture film, 2,450 videotapes, 2,000 scholarly books and journals, hundreds of photographic prints and negatives, manuscripts correspondence, fieldnotes, research files, program scripts, and indexes, comprising an "unparalleled ethnographic documentation collected by the legendary folklorist over a period of sixty years," according to the library's American Folklife Center.

"The Alan Lomax Collection contains pioneering documentation of traditional music, dance, tales, and other forms of grassroots creativity in the United States and abroad," said James H. Billington, the Librarian of Congress. "We are extremely pleased that this collection has come to our American national library, where its creator did such important work in the 1930s."[2]

Alan Lomax was quite possibly the most influential folklorist of the twentieth century. His early field work led to the discovery of artists like Muddy Waters (who would play a large part in the emergence of rhythm and blues and rock and roll) and Woodie Guthrie (who would greatly influence the career of Bob Dylan and inspire the folk revival of the 1960s). His recordings of the legendary blues master Son House and discovery and recording of Fred McDowell and Bukka White remain milestones in the emergence of the blues as a popular music genre. "Without Lomax," says musician and music theorist Brian Eno, "it's possible there would have been no blues explosion, no R&B movement, no Beatles, and no Stones, and no Velvet Underground."[3] "No one has come close to Alan Lomax in illuminating the intersecting musical roots of an extraordinary range of cultures, including our own," said jazz critic Nat Hentoff.[4]

Lomax is also among the most influential proponents of multicultural understanding in twentieth century. Lomax's singular dedication to studying culture through indigenous music and dance has enabled once-invisible cultures to express their experience through art and has permanently changed the world cultural landscape. The diverse folk traditions he collected in the field, for which he devised new systems of measurement—cantometrics for song, and choreometrics for dance—have authenticated folk art as a rightful aspect of the artistic heritage of humankind.

"The orally transmitted wisdom, art and music of the people," Lomax wrote in what could be an eptithet to his career, "can provide ten thousand bridges across which men of all nations may stride to say, 'You are my brother.'"[5]

Retrieved from https://www.newworldencyclopedia.org/p/index.php?title=Alan_Lomax&oldid=1052482
Categories:
Hidden category:
This page was last edited on 11 May 2021, at 01:07.
Content is available under Creative Commons Attribution/Share-Alike License; additional terms may apply. See Terms of Use for details.