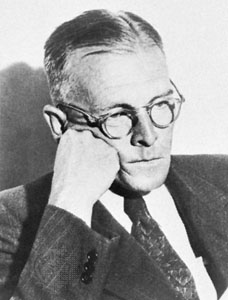 Alan Stewart Paton (January 11, 1903 – April 12, 1988) was a South African author best remembered today for his singularly moving novel Cry, The Beloved Country, which powerfully addressed the difficult issues of racial and ethnic prejudice and brought to global attention the political tensions and injustices of South Africa in the mid-twentieth century. Paton's novel, written in rhythmic prose closely modeled on the language of the King James Bible, is considered one of the pinnacles of South African literature, as well as one of the most emotionally powerful novels of the twentieth century. Paton is undeniably one of the most accomplished of all politically and morally-conscious writers, and his legacy continues to shape the cultural and literary development of South Africa.

Paton was born in Pietermaritzburg, KwaZulu-Natal, the son of a minor civil servant. After attending Maritzburg College, he studied for a Bachelor of Science degree at the University of Natal in his hometown, followed by a diploma in education. After graduating, he taught at a high school in Ixopo, where he met his first wife, Dorrie. Soon after his marriage, he and Dorrie moved to another school back in Pietermaritzburg.

From 1938 to 1945 Paton served as the principal director of the Diepkloof Reformatory for young offenders. During his tenure there he introduced controversially progressive reforms in order to, in his belief, create conditions where children of dangerous backgrounds would be motivated to become productive citizens. Most notable among these were the open dormitory policy, the work permit policy, and the home visitation policy, all of which allowed boys interred at the Reformatory to gradually attain freedom, up to and including residing off the facility. Significantly, of the more than 10,000 boys kept at the Reformatory during Paton's years at Diepkloof, less than one percent ever attempted to escape.

Paton volunteered for service during World War II, but was refused. During this time, he took a trip, at his own expense, to tour correctional facilities across the world. He toured Scandinavia, England, continental Europe, and the United States of America. During his time in Norway, he began work on his first and most famous novel, Cry, The Beloved Country, which he would complete over the course of his journey, finishing it on Christmas Eve in San Francisco in 1946. There, he met Aubrey and Marigold Burns, who read his manuscript and found a publisher for it.

In 1953 Paton founded the South African Liberal Party, which fought against the apartheid legislation introduced by the National Party. He remained the president of the SALP until its forced dissolution by the apartheid regime, due to the fact that both blacks and whites comprised its membership. He was noted for his peaceful opposition to the apartheid system. Following his forced retirement from politics, Paton retired to Botha's Hill where he lived, peacefully, until his death.

Cry, The Beloved Country is Paton's first novel and is widely considered his masterwork. It was first published in New York in 1948 by Charles Scribner's Sons and in London by Jonathan Cape. It is the story of Stephen Kumalo, a black Anglican priest from a rural Natal town, and his search for his son, Absalom, in the city of Johannesburg. In addition to being a powerful story of fathers and sons, Cry, The Beloved Country is also a deep allegory of the underlying tensions and troubles of South Africa as a whole.

The novel opens in the village of Ndotsheni, where the black pastor, Stephen Kumalo, receives a letter from the priest Theophilus Msimangu in Johannesburg. Msimangu urges Kumalo to come to the city to help his sister, Gertrude, who is sick. Kumalo goes to Johannesburg to help Gertrude and to find his son, Absalom, who had gone to the city to look for Gertrude but never came home. Upon his arrival in Johannesburg, Kumalo learns that Gertrude has taken up a life of prostitution, and is now drinking heavily. Gertrude agrees to return to Ndotsheni with her young son.

Kumalo embarks on the search for his son, first seeing his brother John, a carpenter who has become involved in the politics of South Africa. Kumalo and Msimangu follow Absalom's trail only to learn that Absalom has been in a reformatory and impregnated a young woman. Shortly thereafter, Kumalo learns that his son has been arrested for the murder of Arthur Jarvis, a white activist for racial justice and the son of Kumalo's neighbor, James Jarvis.

Jarvis learns of his son's death and comes with his family to Johannesburg. Jarvis and his son had been distant, and now James Jarvis is looking to come to know his son through his writings. Through reading his son's essays, Jarvis decides to take up his son's work on behalf of South Africa's blacks.

Absalom is sentenced to death for the murder of Arthur Jarvis. Before his father returns to Ndotsheni, Absalom marries the girl he has impregnated, and she joins Kumalo's family. Kumalo returns to his village with his daughter-in-law and nephew, finding that Gertrude ran away on the night before their departure.

Back in Ndotsheni, Kumalo makes a futile visit to the tribe's chief in order to discuss changes that must be made to help the barren village. Help arrives, however, when Jarvis becomes involved in the work. He arranges to have a dam built and hires an agricultural demonstrator to implement new farming methods.

The novel ends on the night of Absalom's execution, which finds Kumalo praying on a mountainside as dawn breaks over the valley.

Cry, The Beloved Country was written before the implementation of the apartheid political system in South Africa. The novel was published in 1948, with apartheid becoming law later on that same year.

It enjoyed critical success around the world, except in South Africa, where it was banned, due to its politically dangerous material. The book sold over 15 million copies around the world before Paton's death.

Cry, the beloved country, for the unborn child that is the inheritor of our fear. Let him not love the earth too deeply. Let him not laugh too gladly when the water runs through his fingers, nor stand too silent when the setting sun makes red the veld with fire. Let him not be too moved when the birds of his land are singing, nor give too much of his heart to a mountain or a valley. For fear will rob him of all if he gives too much.

Alan Paton is best remembered today for his singularly moving novel Cry, The Beloved Country, which powerfully addressed the difficult issues of racial and ethnic prejudice and brought to global attention the political tensions and injustices of South Africa in the mid-twentieth century. Paton's novel, written in rhythmic prose closely modeled on the language of the King James Bible, is considered one of the pinnacles of South African literature, as well as one of the most emotionally powerful novels of the twentieth century. Paton is undeniably one of the most accomplished of all politically and morally-conscious writers, and his legacy continues to shape the cultural and literary development of South Africa.

Retrieved from https://www.newworldencyclopedia.org/p/index.php?title=Alan_Paton&oldid=987111
Categories:
Hidden category:
This page was last edited on 7 April 2015, at 16:02.
Content is available under Creative Commons Attribution/Share-Alike License; additional terms may apply. See Terms of Use for details.