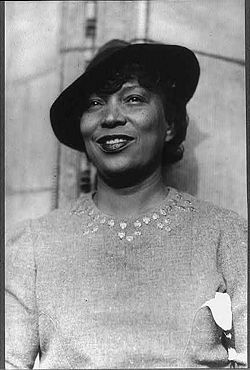 Zora Neale Hurston (January 7, 1891 – January 28, 1960) was an African-American anthropologist, novelist, and dramatist during the time of the Harlem Renaissance, best known today for her novel Their Eyes Were Watching God. During her early life, Hurston was considered a rising star in anthropology; she worked with hugely influential anthropologists like Franz Boas and compiled a number of studies on Haitian religious practices and the folk culture of black Floridians.

Hurston's uniquely autobiographical style of relaying her anthropological research, however, was too far removed from the mainstream style of academic writing to be accepted by the larger scientific community, and as a result Hurston began to redirect her gift for writing and her eye for detail into writing fiction. Unfortunately, Hurston's detailed and deeply historical novels of black and white Southern life were too apolitical to be widely accepted during the politically and racially tense times of their publication. Hurston died in almost complete obscurity, her works unread by almost anyone, black or white, despite their immeasurable quality. It would not be until decades after her death that a critical revival of Hurston's works would begin to take shape.

Today, Hurston's novels are seen as some of the greatest works to emerge out of the Harlem Renaissance period in African-American literature, and her anthropological works, with their unique blend of anthropology and autobiography, are seen as forerunners of contemporary ethnography, which blurs the line between fiction and non-fiction. Hurston is now, along with Langston Hughes and Richard Wright, one of the most widely read and respected of African-American authors. Her works have been cited as a direct influence by a number of prominent contemporary novelists, including Toni Morrison and Alice Walker.

Hurston was "purposefully inconsistent in the birth dates she dispensed during her lifetime, most of which were fictitious."[1] For a long time, scholars believed that Hurston was born and raised in Eatonville, Florida, with a birth date in 1901. In the 1990s, it came to light that she was born in Notasulga, Alabama, in 1891; she moved to Eatonville, the first all-black incorporated township in the United States, at a young age and spent her childhood there.

Hurston also lived in Fort Pierce, Florida, and attended Lincoln Park Academy. Hurston would discuss her Eatonville childhood in the 1928 essay, "How It Feels To Be Colored Me." At age 13, her mother died, and later that year her father sent her to a private school in Jacksonville.

Hurston began her undergraduate studies at Howard University but left after a few years, unable to support herself. She was later offered a scholarship to Barnard College where she received her Bachelor of Arts in anthropology in 1927. While at Barnard, she conducted ethnographic research under her advisor, the noted anthropologist Franz Boas of Columbia University. She also worked with Ruth Benedict as well as fellow anthropology student, Margaret Mead.[2]

Hurston applied her ethnographic training to document African American folklore in her critically acclaimed book Mules and Men (1935) and merged the insights she had collected through her anthropological work with lyrical prose in her novels and plays. In 1937, Hurston was awarded a Guggenheim Fellowship to travel to Haiti and conduct research. She was one of the first academics to conduct an ethnographic study of the Vodun.

Hurston died penniless in obscurity and was buried in an unmarked grave in Fort Pierce, Florida, until African-American novelist Alice Walker and literary scholar Charlotte Hunt found and marked the grave in 1973, sparking a Hurston renaissance.

During her prime, Hurston was a supporter of the UNIA and Marcus Garvey, casting herself in fierce opposition to the communism professed by many of her colleagues in the Harlem Renaissance such as Langston Hughes. Hurston thus became by far the leading black figure of the libertarian Old Right, and in 1952 she actively promoted the presidential candidacy of Robert Taft.

Hurston's detachment from the wider Civil Rights movement was demonstrated by her opposition to the Supreme Court ruling in the Brown v. Board of Education case of 1954. She voiced this opposition in a letter, Court Order Can't Make the Races Mix, which was published in the Orlando Sentinel in August 1955. This letter caused a furor and proved to be Hurston's last attempt at public activism.

Partly as a result of Hurston's unpopular political opinions, her work slid into obscurity for decades. In addition to her controversial political views, many readers objected to the representation of African-American dialect in Hurston's novels. Hurston's stylistic choices in her dialogue were influenced by her anthropological training. Like a true anthropologist, Hurston strove to represent speech patterns of the period that she documented through ethnographic research. Unfortunately, this causes much of the dialogue in her novels to read like a minstrel show, as in the following excerpt from Their Eyes Were Watching God:

Some critics during her time felt that Hurston's decision to render language in this way caricatured black culture. In more recent times, however, critics have praised Hurston for her assiduous attention to the actual spoken idiom of the day.

The conservative politics of Hurston's work also hindered the public's reception of her books. During the 1930s and 1940s when her work was published, the pre-eminent African American author was Richard Wright. Unlike Hurston, Wright wrote in explicitly political terms, as someone who had become disenchanted with communism, using the struggle of black Americans for respect and economic advancement as both the setting and the motivation for his work. Other popular African American authors of the time, such as Ralph Ellison, were also aligned with Wright's vision of the political struggle of African Americans. Hurston's work, which did not engage these explicit political issues, simply did not fit in smoothly with the spirit of the times.

With the publication of the ambitious novel Seraph on the Suwanee in 1948, Hurston burst through the tight bounds of contemporary black writing in yet another seemingly apolitical way. The novel is a tale of poor whites struggling in rural Florida's citrus industry, and although black characters are present, they recede into the background. Neither the black intelligentsia nor the white mainstream of the late 1940s could accept the notion of a black writer speaking through white characters. Panned across the board, Seraph ended up being Hurston's last major literary effort.

Their Eyes Were Watching God

Easily Hurston's most influential work widely considered to be a masterpiece of early twentieth-century American literature, Their Eyes Were Watching God is a complex tale of rural, black American life in 1920's Florida. A watershed book for American literature as a whole, the book touches upon complex issues of racial and gender inequity and is written in a highly original, lyrical style of prose influenced by Hurston's thorough knowledge of the techniques of African-American folklore.

The main character, a black woman in her early forties named Janie Crawford, tells the story of her life and journey via an extended flashback to her best friend, Pheoby. Her life has three major periods corresponding to her marriages to three men.

Janie's grandmother, Nanny, was a slave who was impregnated by a white man, giving birth to a daughter, who in turn gave birth to Janie and left her with her grandmother. Janie's grandmother arranges for her to marry Logan Killicks, an older man and farmer who is looking for a wife to keep his home and help on the farm. Janie has the idea that marriage must involve love, forged in a pivotal early scene where she sees bees pollinating a pear tree and believes that marriage is the human equivalent to this natural process. Logan Killicks, however, wants a domestic helper rather than a lover or partner, and after he begins to hit Janie and to try to force her to help him with the hard labor of the farm, Janie runs off with the glib Joe Starks, who takes her to Eatonville.

Starks arrives in Eatonville to find the residents devoid of ambition, so he arranges to hire some local residents to build a general store for him to own and run, and has himself appointed mayor. Janie soon realizes that Joe wants her as a trophy. He wants the image of his perfect wife to reinforce his powerful position in town. He asks her to run the store but forbids her from participating in the substantial social life that occurs on the store's front porch.

After Starks dies, Janie finds herself financially independent and beset with suitors, some of whom are men of some means or prestigious occupations, but she falls in love with a drifter and gambler named Tea Cake. She sells the store and the two head to Jacksonville and get married, then move to the Everglades region soon after so Tea Cake can find work planting and harvesting beans. While their relationship has its ups and downs, including mutual bouts of jealousy, Janie has found the passionate, love-based relationship for which she has been searching.

At the end of the novel a hurricane devastates Janie's home, and while Tea Cake and Janie survive it, Tea Cake is bitten by a rabid dog while saving Janie from drowning. He contracts the disease himself. He ultimately tries to shoot Janie with his pistol, but she shoots him with a rifle in self-defense. She is charged with murder. At the trial, Tea Cake's black, male friends show up to oppose her, while a group of local white women support her. The all-white jury acquits Janie, and she returns to Eatonville, only to find the residents gossiping about her and assuming (or perhaps wishing) that Tea Cake has run off with her money.

While today Hurston's book is present on many reading lists for African American literature programs in the United States, Hurston’s peers did not universally praise the book, with particular criticism leveled at her use of phonetic spellings of black dialect. Richard Wright called Their Eyes Were Watching God a "minstrel-show turn that makes the white folks laugh" and said it "[showed] no desire whatever to move in the direction of serious fiction."[3] Many other prominent authors that were a part of the Harlem Renaissance were upset that Hurston exposed divisions between light-skinned African-Americans and those that had darker skin, as seen in Mrs. Turner, as well as the more subtle division between black men and women.

In recent times, however, Hurston's novel has been praised as perhaps one of the most realistic depictions of black life in the early twentieth century, with all of its conflicts and contradictions vividly present. Moreover, Hurston's use of black vernacular is now often praised as a major achievement in the history of black literature, demonstrating that the language of black Americans is more than capable of the metaphorical and lyrical transcendence necessary for high art.