Antimony (chemical symbol Sb, atomic number 51) is a metalloid with four allotropic forms. The stable form of antimony is a blue-white metal. Yellow and black antimony are unstable nonmetals. Antimony and many of its compounds are toxic and need to be handled with care.

This element is mainly used as a hardener in lead for storage batteries. In addition, it is used in alloys for type metal, tracer bullets, antifriction materials, cable sheathing, plumbing, and solder. Recently, it is being used by the semiconductor industry for the manufacture of diodes and infrared detectors. Several compounds of antimony are used in the production of flame-proofing materials, glasses, ceramics, paints, and pottery. Some compounds have a history of use as medicines for humans and animals.

The derivation of antimony's modern name and its symbol can be traced along a complex path. Antimony sulfide (Sb2S3) was used in some countries as a cosmetic powder, and its Coptic name (CTHM, or "stem") was borrowed by the Greeks, who called it στιβι (stibi). From that came the Latin name stibium, which was then converted in Arabic to انتيمون ([al-]ithmīd). Al-ithmīd, in turn, was later latinized by alchemists to "athimodium," and eventually to "antimonium." The chemical pioneer Jöns Jakob Berzelius abbreviated stibium as Sb in his writings about antimony, and his abbreviation became the standard symbol. 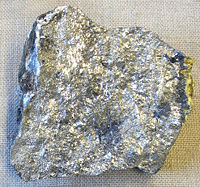 Estimates of the abundance of antimony in the Earth's crust range from 0.2 to 0.5 parts per million (ppm). Despite this low abundance, it is found in over 100 mineral species. It is sometimes found in the native (elemental) state, but it occurs predominantly as the sulfide mineral stibnite (Sb2S3). It is also found associated with lead, copper, and silver.

The People's Republic of China is by far the world's largest producer of antimony. The largest mine in that country is the Xikuangshan mine in Hunan Province. Other producers are Russia, South Africa, Tajikistan, and Bolivia.

Commercially, antimony is generally produced in the form of ingots, broken pieces, granules, and cast cake. Other forms are powder, shot, and single crystals.

Antimony was recognized in antiquity (3000 B.C.E. or earlier) in various compounds and was prized for its fine casting qualities. The black powder of antimony sulfide (stibium) is soluble in water and was the ancient version of mascara during Roman times. It was used to darken eyebrows and eyelashes, or to draw a line around the perimeter of the eye.

In the traditional history of Middle Eastern alchemy, it is claimed that pure antimony was well-known to the Islamic alchemist Geber (Abu Musa Jabir ibn Hayyan) in the eighth century. This claim, however, is disputed. Marcellin Berthelot, who translated a number of Geber's books, stated that antimony is never mentioned in them. Other authors, however, state that Berthelot translated only some of the less important books, while the more interesting ones (some of which might describe antimony) have yet to be translated.

According to the history of metallurgy, the first description of the procedure to isolate antimony is in the Italian book De la pirotechnia by Vannoccio Biringuccio, published in 1540. This book precedes the more famous Latin book De re metallica of 1556 by Agricola, although the latter has often been incorrectly considered the discoverer of metallic antimony.

The traditional history of Western alchemy maintains that metallic antimony was described (before Biringuccio's book) by the Prior Basilius Valentinus, in the Latin manuscript "Currus Triumphalis Antimonii" of about 1450. It was published in the English translation, "The triumphal chariot of antimony," in 1604, by Johann Thölde (1565-1614). The marvelous finding of all of the Valentinus' manuscripts, as in the alchemical tales, is fully described by Jean-Jacques Manget in his Bibliotheca chemica curiosa (1702). These manuscripts remained enclosed for more than a century in a pillar of Saint Peter's Abbey at Erfurt, until the pillar was shattered by a thunderbolt.

Some scholars have considered Basilius Valentinus a mythological personage. The most prominent critic was Leibniz (1646-1716), who declared after a careful search that the Prior Valentinus never existed in the Abbey of Erfurt, but was only a pseudonym, probably of Thölde himself, used to merge poorly translated materials of various origins.

In the periodic table, antimony is located in group 15 (formerly group 5A), between arsenic and bismuth. It is thus a member of the nitrogen family of elements, sometimes called the pnictogens (or pnicogens). It lies in period 5, between tin and tellurium.

In its elemental form, antimony is a silvery white, brittle, fusible, crystalline solid. It exhibits poor electrical and thermal conductivity and vaporizes at low temperatures. A metalloid, antimony resembles a metal in appearance and physical properties, but chemically it does not react as a metal. It is attacked by oxidizing acids and halogens. Antimony and some of its alloys are unusual in that they expand on cooling.

Antimony has multiple isotopes, only two of which are stable: 121Sb and 123Sb. Their relative abundances have been calculated to be about 57.36 percent and 42.64 percent, respectively. The radioactive isotope 125Sb has a half-life of about 2.76 years, but the other radioisotopes have extremely short half-lives.

The most important use of antimony is as a hardener in lead for storage batteries. In addition, antimony is increasingly being used in the semiconductor industry in the production of diodes, infrared detectors, and Hall-effect devices.

Antimony (particularly as an alloy) is also used in:

Antimony compounds—particularly the oxides, sulfides, sodium antimonate, and antimony trichloride—are used in the making of flame-proofing compounds, ceramic enamels, glass, paints, and pottery. Antimony trioxide is the most important of the antimony compounds and is primarily used in flame-retardant formulations. These flame-retardant applications include such markets as children's clothing, toys, aircraft and automobile seat covers. Also, antimony sulfide is one of the ingredients in modern matches.

Antimony and many of its compounds are toxic. Clinically, antimony poisoning is very similar to arsenic poisoning. In small doses, antimony causes headache, dizziness, and depression. Larger doses cause violent and frequent vomiting, and will lead to death in a few days.

In the past, small doses have been reported in some acidic fruit drinks. The acidic nature of the drink was sufficient to dissolve small amounts of antimony oxide in the packaging for the drink. Modern manufacturing methods, however, avoid this problem. Also, a study has found that antimony is leached from polyethylene terephthalate (PET) bottles, but at levels below drinking water guidelines.

The guidelines for maximum permissible levels of antimony in drinking water are as follows.[2]