Not to be confused with the unrelated provinces of Hainan, Henan, and Yunnan.

Hunan (Chinese: 湖南; pinyin: Húnán) is a province of China located in the middle reaches of the Yangtze River. Its position south of Lake Dongting provides it with its name, Hunan, which means "south of the lake." Hunan is also sometimes referred to as Xiang, after the Xiang River which runs through the province.

Hunan entered the written history of China around 350 B.C.E., when it became part of the State of Chu under the kings of the Zhou dynasty. Until that point, Hunan was a land of primeval forests occupied by the ancestors of the modern Miao, Tujia, Dong and Yao peoples. Starting at this time and for hundreds of years thereafter, it was a magnet for migration of Han Chinese from the north, who cleared most of the forests and began farming rice in the valleys and plains. To this day, many of the small villages in Hunan are named after the Han families who originally settled there, and the strong Han presence can be clearly seen in the current demographic make-up of the province. Migration from the north was especially prevalent during the Eastern Jin Dynasty and the Southern and Northern Dynasties Period, when nomadic invaders overran the north.

During the Five Dynasties and Ten Kingdoms Period, Hunan was home to its own independent regime, Ma Chu. Up until the Qing dynasty, Hunan, together with Hubei, was considered part of the province of Huguang. Hunan became an important communications center due to its strategic position on the Yangtze River, and also because of the construction of the Imperial Highway between northern and southern China. In addition to its strategic location, Hunan is also an important agricultural area of China, with its land producing grain so abundantly that it has been used to feed many parts of China with its surpluses. The population continued to climb until, by the nineteenth century, Hunan was overcrowded and became prone to peasant uprisings.

The Taiping Rebellion, which began to the south in Guangxi Province in 1850, spread into Hunan and then further eastward along the Yangtze River valley. Ultimately, it was a Hunanese army under Zeng Guofan which marched to Nanjing and put down the uprising in 1864. Hunan was relatively quiet until 1910, when there were uprisings against the crumbling Qing dynasty which were followed by the Communist's Autumn Harvest Uprising of 1927 led by Hunanese native Mao Zedong. This uprising established a short-lived Hunan soviet in 1927.

The Communists sustained their presence in the region by maintaining a guerilla army in the mountains along the Hunan-Jiangxi border until 1934. After sustaining pressure from the Kuomintang (Nationalist) forces, the Communists then began the famous Long March to their bases in Shaanxi Province. After the departure of the Communists, the KMT army fought against the Japanese in the second Sino-Japanese war, defending the capital Changsha until it fell in 1944, when Japan launched Operation Ichigo to control the railroad from Wuchang to Guangzhou (Yuehan Railway). After the defeat of the Japanese in 1945, Hunan was left relatively unscathed by the Chinese civil war that followed, and in 1949 the Communists returned once more as the Nationalists retreated southward to Taiwan.

Well known as Mao Zedong's home province, Hunan supported the Cultural Revolution of 1966-1976, and was slower than most provinces in adopting the political and economic reforms implemented by Deng Xiaoping in the years that followed Mao's death in 1976. Several prominent Chinese political figures are Hunanese, including former Chinese Premier Zhu Rongji.

Hunan Province is located on the south bank of the Yangtze River (Changjiang, 长江), about half way along its length. Shanghai lies 1000 km away, Beijing 1200 km away, and Guangzhou 500 km away.

Hunan has a total cultivated area of 3.92 million hectares, 18.5 percent of the province’s total area. Over half of the soil in the province is red or yellow earth, and nearly 20 percent of the cultivated areas are suitable for paddy planting. The province has a complete water system, fed by the Xiangjiang, the Zijiang, the Yuanjiang and the Lishui Rivers, which have a total waterway length of 2,200 km and have nearly 5,000 tributaries. These four major rivers converge together on the Yangtze River at Lake Dongting in the north of Hunan. Lake Dongting is the largest lake in the province and the second largest fresh water lake in China, with a water area of 2,691 square km. It gathers the waters of the Xiangjiang, the Zijiang, the Yuanjiang and the Lishui Rivers from the southwest, and then flows into the Yangtze River at Chenglingji.

Due to the reclamation of land for agriculture, Lake Dongting has been subdivided into many smaller lakes, though there is now a growing trend to reverse some of the reclamation, which had damaged wetland habitats surrounding the lake. Hunan's climate is subtropical, with mild winters and plenty of precipitation. January temperatures average 3 to 8 °C while July temperatures average around 27 to 30 °C. Average annual precipitation is 1200 to 1700 mm.

Animal raising plays a significant role in the lives of farmers in Hunan, especially pig-raising, which generates a handsome amount of income, and has led to the province becoming a leading producer of pork. Other types of animals that are raised in Hunan include water buffaloes in Binhu, cattle in western Hunan and geese in Ugang county.

The Lengshuijiang area is noted for its stibnite mines, and is one of the major centers of antimony extraction in China. In general, Hunan is well known for its rich mineral resources. Specifically, it has the largest deposits of stibium and tungsten, and its deposits of rubidium, stone coal, manganese, arsenic, lead and zinc are also among the largest in China.

Hunan's education system is fairly well developed compared to other provinces of China. By the end of 2002, Hunan had 60 colleges and universities, and 419,400 enrolled students. In addition, it had 16 graduate-level institutes, with 14,147 students enrolled and 24 adult colleges with an enrollment of 301,800. Along with this, the province has 113 secondary technical schools, with 223,700 students, and 4,712 middle schools, taking in 4.669 million students. Hunan’s middle school education rate is 93 percent and currently, the province has 27,243 primary schools with 5.29 million pupils. Its primary education rate is 97.64 percent. In general, secondary education has developed more rapidly than primary education in Hunan, and higher education has developed even more rapidly than secondary education. In the total population, the amount of education being received has steadily increased over the years, to the point where now the proportion of the population with at least a secondary education is substantial. 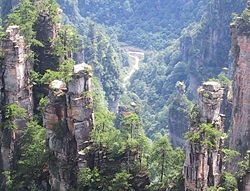 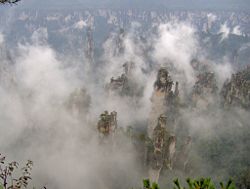 Xiang is a subdivision of spoken Chinese that originates from Hunan.

Hunan's cuisine is well known for its unique flavor. In Hunan, nearly every dish tastes hot and delicious. The people of Hunan like eating peppery foods.

Hunan's products include Xiang embroidery, one of China's four famous embroideries. With 200 years of history behind them, the chrysanthemum stone carvings of Liuyang are vivid and exquisite, and Liuyang City is known for its firecrackers, which are popular all over China.

In addition to its goods, Hunan is famous for the many important figures that have come from the province. In ancient times, Quyuan, a patriotic poet, committed suicide by throwing himself into the Miluo River. The story of his death and the search for his body started the tradition of the Dragon Boat Festival. Chairman Mao, the idol of the Chinese people and one of China's most important contemporary political figures, was born in Shaoshan. Zhu Rongji, one of the most important current leaders in the country, also comes from Hunan province.

In total, Hunan has developed 43 scenic areas. There are three national-level key scenic areas covering Mount Hengshan, Wulingyuan, Yueyang Pagoda, Dongting Lake and Shaoshan (the village where Mao Zedong was born), as well as 27 other provincial–class scenic areas, such as Zhangjiajie, Feng Huang, and Hong Jiang. The Wulingyuan tourist area is famous for its unique natural landmarks, including limestone caves, brooks, hot springs, ancient trees and rare animals. For that reason, it been placed by the United Nations Educational, Scientific and Cultural Organization on the World Natural Heritage List. Mount Hengshan is the famous sacred mountain of Buddhism and a popular summer resort. Yueyang Pagoda is also well known both domestically and internationally for its long history, folklore, and grand architecture. Changsha, the provincial capital, is a historic and cultural city, and some of the tourist sites there include the Han Dynasty Tombs at Mawangdui, Yuelu Hill, Loving Youth Pavilion (Aiwanting), Orange Isle (Juzizhou), and the Yuelu Academy of Classical Learning.

Professional sports teams in Hunan include:

Retrieved from https://www.newworldencyclopedia.org/p/index.php?title=Hunan&oldid=1099207
Categories:
Hidden category:
This page was last edited on 4 February 2023, at 12:20.
Content is available under Creative Commons Attribution/Share-Alike License; additional terms may apply. See Terms of Use for details.