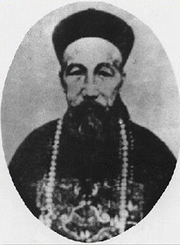 Zēng Guófán (Traditional Chinese: 曾國藩; Simplified Chinese: 曾国藩; Wade-Giles: Tseng Kuo-fan, Styled Bóhán 伯函 and variably Díshēng 滌生; Posthumous name: Wenzheng 文正; created Marquess Yiyong of the First Class 勇毅一等候) (November 21, 1811 – March 12, 1872) was an eminent Han Chinese official, statesman, military general, devout Confucian scholar, poet, and writer of the late Qing Dynasty in China. He raised the Xiang Army to fight effectively against the Taiping Rebellion (1850–1864), and, along with other prominent figures, including Zuo Zongtang (左宗棠) and Li Hongzhang( 李鴻章), staved off the collapse of China's imperial regime and set the scene for the era later known as the Tongzhi Resurgence (同治中兴). He was a supporter of the Self-Strengthening Movement to modernize China militarily and economically. As an administrator he introduced a number of innovations, including the establishment of official government printing offices to reprint the Chinese Classics and historical books, the setting up of the Jiangnan Arsenal in Shanghai for the manufacture of modern weapons and the study of Western science and technology, and the introduction of a program to send Chinese students overseas for education.

Zeng was known for his strategic perception, administrative skill and his adherence to Confucian values of loyalty during an era of chaos, but also for his ruthlessness in executing his policies. He was also an innovative figure in nineteenth-century Chinese literature, and edited two anthologies, one of poetry (Shiba jia shichao, Anthology of Eighteen Poets) and one of prose.

Zeng Zicheng (曾子城) was born in Xiangxiang, Hunan (湘乡) on November 12, 1811, the grandson of Zeng Yiping, a prosperous farmer with social and political ambitions. He passed the prefectural examination in 1833, one year after his father Zeng Linshu had succeeded at his seventeenth attempt. He passed the provincial examination the next year, and, after a failed attempt at the metropolitan examination in the capital in 1835, he finally passed in 1838, at age 27. He had earned the Jinshi degree, the highest level in the civil service examinations, which led to his appointment to the Hanlin Academy, a body of outstanding Chinese literary scholars who performed literary tasks for the imperial court. At Hanlin he changed his name to Zeng Guofan, which sounded more prestigious. Zeng served in Beijing for more than 13 years, and remained devoted to the interpretation of the Confucian Classics. He moved relatively quickly up the ranks, advancing to 2nd-Pin in five years.

In 1843, he was appointed chief literary examiner in the province of Sichuan, and six years later was made Senior Deputy Secretary of the Board of Rites (禮部侍郎). He was appointed junior vice president of the Board of Ceremonies, and served as Vice President of the boards of Defense, Works, Justice, and Finance. In 1850, 1851, and early in 1852, he repeatedly criticized the emperor's behavior, the government's financial policy, and imperial treatment of an outspoken official.

In 1852, when Zeng held the office of Military Examiner, his mother died, and he asked to retire to his native district for the traditional three-year mourning period. In 1850, the Taiping rebels had taken up arms, and by 1852 were overrunning Hunan and had possessed themselves of the cities and strongholds on both shores of the Yangtze River, posing a serious threat to the Qing Dynasty. Zeng was ordered, by a special decree, to assist the governor of the province in raising a volunteer force. The imperial troops were corrupt and too weak to fight off the rebels, so the government encouraged members of the scholar-gentry to organize local self-defense militias in their home areas. Zeng was inexperienced at training and leading troops, but he enthusiastically recruited a group of local toughs. He not only established a local militia in Hunan, but brought the units formed by several scholars in his home district together into a regional army which was paid and equipped by donations and local funds. On his own initiative, Zeng built a fleet of war junks, with which he attacked the rebels. This force eventually became known as Zeng's famous Xiang Army.

In February of 1854, Zeng issued "an urgent call to arms against the Wang tong rebels," explaining that the purpose of the Xiang militia was to protect the Confucian moral order and to punish the Taiping rebels for their barbaric attempt to destroy it, and urging loyal and righteous men to rise up together and stop the Taiping army.

Zeng was defeated in his first engagement, but his lieutenants were more successful. They recovered the capital, Changsha ( 長沙), and destroyed the rebel fleet. Following up these victories of his subordinates, Zeng recaptured Wuchang ( 武昌) and Hanyang (漢陽), near Hankow (漢口), and was rewarded for his success by being appointed vice-president of the Board of War.

Other triumphs led to his being made a baturu (a Manchu order for rewarding military prowess) in 1853, and to his being decorated with a yellow riding-jacket. Meanwhile, in his absence, the rebels retook Wuchang( 武昌) and burnt the protecting fleet. The tide quickly turned, however, and Zeng succeeded in clearing the country round the Poyang lake( 鄱阳湖), and subsequently in ridding the province of Jiangsu (江蘇) of the enemy. His father died in 1857, and after a brief mourning he was ordered to take supreme command in Zhejiang (浙江), and to co-operate with the governor of Fujian in the defense of that province.

Subsequently, the rebels were driven westwards, and Zeng would have started in pursuit had he not been called on to clear the province of Anhui (安徽) of rebel bands. Other regional leaders such as Zuǒ Zōngtáng (Tso Tsung-t'ang左宗棠) and Li Hongzhang (Li Hung-chang Pinyin Zuo Zongtang (李鴻章) ), who first served on Zeng's staff, followed his example and organized their own regional armies under his general direction.

In 1860, Zeng was appointed Viceroy of Liangjiang (the provinces of Jiangxi, Anhui, and Jiangsu: 两江总督) and Imperial war commissioner. At this time, and for some time previously, he had been fortunate in having the active support of Zuo Zongtang (左宗棠), who at a later period recovered Kashgar (喀什)for the emperor, and of Li Hongzhang (李鴻章). He knew how to reward good service, and when occasion arose, he appointed the former to the governorship of Zhejiang and the latter to that of Jiangsu.

In 1862, he was appointed Assistant Grand Secretary of State. By this time, the Imperial forces, assisted by the "Ever-Victorious Army," had checked the progress of the rebellion, and Zeng was able to carry out a scheme which he had long formulated of besieging Nanjing, the rebel headquarters. While Gordon, with the help of Li Hongzhang, was clearing the cities on the lower waters of the Yangtze River, Zeng drew his besieging lines closer around the doomed city.

In July 1864, Nanjing fell into his hands, and he was rewarded with the rank and title of Marquess (of the First Class) Yiyong (毅勇候) and the right to wear the double-eyed peacock's feather (隻眼花翎). The suppression of the Taiping Rebellion was the climax of Zeng’s career. Afterward he worked mainly as an administrator, serving twice as governor-general of Kiangnan and Kiangsi provinces and once as governor of Chihli (present-day Hopeh) province. In 1864-1865, he established official government printing offices in five cities to reprint the Chinese Classics and historical books, and he also restored the examinations system in Nanking, which had been discontinued during the Taiping Rebellion. He became a supporter of the Self-Strengthening Movement for military modernization, and supported, Jung Hung, a graduate of Yale University in the United States, in setting up the Jiangnan Arsenal in Shanghai for the manufacture of modern weapons and the study of Western science and technology. It was by Zeng's recommendation, too, that the government introduced an official program to send Chinese students overseas for education.

In May of 1865, he was sent to quell the Nian Rebellion (捻軍起義), closely related to the former movement, which broke out in Shandong. In May 1865 and October 1866, he again assumed military command in order to quell the Nien Rebellion that took place in northern China, but after a year of indecisive fighting, by Imperial order, he was relieved of his command by his protégé, Li Hongzhang. In the same way, Li succeeded him in the viceroyalty of Zhili, where, after the Tianjin Massacre (1870), Zeng failed to carry out the wishes of his Imperial master to slaughter all prisoners. Instead, Zeng took on a more diplomatic stance toward foreigners. After this political rebuff, he retired to his viceroyalty at Nanjing, where he died in 1872. Zeng was given the posthumous title of Wen-Cheng, the highest title given to civil officials under the Ch'ing dynasty.

Although most famous for his military and political career, Zeng Guofan was an innovative figure in nineteenth-century Chinese literature. Zeng was a voluminous writer. His papers addressed to the throne and his literary disquisitions are held in high esteem by Chinese scholars, who treasure the edition of his collected works in 156 books, which was edited by Li Hongzhang in 1876, as a memorial of a great statesman. Zeng enjoyed reading and had a special interest in the Twenty-Three Histories, and other classics. He was also a dedicated poet, modeling his poetry after the great Song writers. He edited a poetry anthology entitled Shiba jia shichao (Anthology of Eighteen Poets) and another anthology of prose.

Unlike his contemporaries, Zeng was officially married only once, to a woman of the Ouyang family, when he was in his late teens. His wife was known as a capable woman. They had three sons and five daughters; two of his eldest children died young. His eldest son, Zeng Jize, who inherited his title of First Class Marquess, became a famous diplomat in late-Qing history.

His younger brother, Zeng Guoquan, an ambitious general in the Xiang Army, was later appointed Viceroy of Liangjiang (the provinces of Jiangxi, Anhui, and Jiangsu: 两江总督) in 1884.

Zeng Guofan's historical reputation is a mixed one. Revolutionaries, including some members of the Kuomintang and communist leaders, criticized him as a staunchly conservative traitor. Conservatives such as the Nationalist Chinese leaders saw him as a symbol of Confucian values and a hero who preserved order and stability. Many admire the political adeptness with which he survived in the ruthless late-Qing bureaucracy. Some have blamed Zeng for all the civilian losses and damages done during the Taiping Rebellion, while others criticize him for being too friendly with certain foreign ideas. In modern times, the criticism of Zeng has gradually disappeared. In 1992, Chinese author Tang Haoming published a trilogy, Zeng Guofan a novelization of Zeng's life during and after the Taiping Rebellion. This trilogy characterized Zeng as a common person, but adopted a positive view of him. Both Mao Zedong and Chiang Kai-shek praised Zeng's ability in military and political affairs. Especially in recent years, Zeng Guofan's life and his works have been the topic of many new publications. Zeng's leadership and his military campaigns have been presented as examples of strategy to be used in business or bureaucratic dealings.