Qinghai is a province of the People's Republic of China located in the northwestern portion of the country. It is named after the enormous Qinghai Lake, which is located in its provincial territory. The province borders Gansu to the northeast, Xinjiang Autonomous Region to the northwest, Sichuan to the southeast, and Tibet Autonomous Region to the southwest.

Qinghai, a province remote to the centers of power in China and newly established, enjoys a sense of independence in the setting of natural beauty on the northeast Tibetan plateau. Life at an average elevation of 10,000 feet requires a sense of vigor and hardiness. With an economy based on simple agriculture, yet serving as the origin of three great rivers and the source of abundant minerals and metals, Qinghai has the challenge of preserving ecological balance while developing resources. The provinces rich ethnic diversity, and the lively presence of Tibetan Buddhism, adds to the color and attractiveness of the region.

Qinghai is a relatively recent province of China. The area has historically been an ethnic melting pot, mixing Han Chinese, Mongolian, Tibetan, and Turkic influences into an interesting hybrid culture. It served as a battleground during the Tang Dynasty and the subsequent Chinese dynasties that fought against successive Tibetan dynasties throughout Chinese history.[1].

In 1928, it officially became a province of the Republic of China. During the warlord period of the early ROC when control had not been established over all areas of China, the region became the primary base for the warlord Ma Bufang. After the subsequent Second Sino-Japanese War (from 1937 to 1945) and the Chinese Civil War (from 1945 to 1949), Qinghai was again made into a province under the dominion of the People's Republic of China in 1949.

Qinghai is located on the northeastern part of the Tibetan Plateau. It is naturally divided into two parts by Riyue Mountain, with a pastoral area lying to the west and an agricultural area lying to the east. The Yellow River originates in the middle of the province, while both the Yangtze and the Mekong River also have their sources in the southern part. The province is also home to Qinghai Lake (from which it gains its name), which is the largest lake in the province, as well as the largest lake in the entire People's Republic of China. The average elevation of Qinghai is about 3,000 metres above sea level. Mountain ranges include the Tangula Mountains and the Kunlun Mountains.

Qinghai is located more than 1,500 km from the eastern coast of China, and has very little rainfall with plenty of sunshine. Its average temperature is approximately -5 to 8°C, with January temperatures ranging from -18.2 to -7°C and July temperatures ranging from 5 to 21°C. It is also prone to heavy winds as well as sandstorms from February to April. The province has a long and not overly cold winter with a short and cool summer.

Qinghai has a very simple, largely agricultural economy. Some of its important crops include spring wheat, highland barley, beans, potatoes and rapeseed. The province is also an important livestock breeding center, with a variety of livestock including sheep, yaks, pian niu (a crossbreed of bulls and yaks) and horses. With such an abundance of livestock, Qinghai also produces large quantities of sheep wool, meat, leather and sausage casings for other parts of the country. In addition to all of this, the province is an important producer of medicinal materials such as caterpillar fungus, antlers, musk and rhubarb.

Qinghai also has a sizable amount of mineral resources. A total of 125 minerals have been found in the province, and of these, 50 of them are among the top ten in terms of reserves in the entire country. Another 11, including potassium chloride and magnesium salts have the largest deposits of their kinds in all of China. The province is rich in lead, zinc, copper, chromium, cobalt, nickel, iron, mirabilite, gypsum, potassium, boron and coal. The abundance of resources in the Qilian Mountains has led it to be called the "treasure mountains," while the sizable resource base in the Qaidam Basin has earned it the name "treasure basin."

Qaidam Basin provides a significant energy resource for the People's Republic of China, as it is abundant in natural gas and oil, with a total of 16 oilfields and six gas fields. The total oil reserve in the province is roughly 1.244 billion tons, of which 200 million tons has been explored. Along with this, the province has 178 hydropower stations with a total installed generation capacity of 21.66 million kw, an exploitable capacity of 18 million kw, and a generation rate of 77 billion kwh annually. 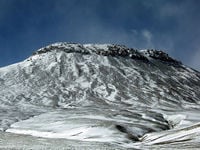 The province plans to build seven more medium-sized hydropower stations, which, with a total installed generation capacity of 11 million kw, will produce 36.8 billion additional kwh each year. The construction cost of each power station in Qinghai is 20-40 percent lower than that of the national average, which makes it especially attractive for investment from the central government. Due to its geographical makeup, the province is also rich in solar, wind and geothermal energy. All of these various energy resources make Qinghai a strategically important province for the PRC.

Its heavy industry includes iron and steel production, both of which are located near the provincial capital city of Xining. Oil and natural gas from the Chaidamu Basin has also been an important contributor to the economy.

Despite the strong presence of natural and energy resources, Qinghai's economy is amongst the smallest in all of China. Its nominal GDP for 2004 was just 46.57 billion RMB (5.78 billion USD) and contributed a little over 0.3 percent to the entire country's economy. Per capita GDP was 7310 RMB (882 USD). 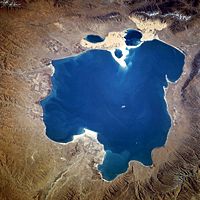 Three major environmental issues are of key importance to Qinghai: soil erosion, water shortage, and deforestation. Since Qinghai holds an important position as the origin point of several rivers, it is consequently very important to the ecological balance of the entire region. In the next 15 years, the province seeks to improve its conservation of the ecological balance, including a major increase in protection of the water and soil in six areas: the sources of the Yangtze and Yellow rivers, Qinghai Lake, the arid mountains in the east, the Longyang Gorge Reservoir, and the Qaidam Basin. It will be both important and necessary to not only strengthen the protection of natural forests, grasslands, and other homes of wild plants and animals, but to also increase the restoration of deteriorated grasslands and the construction of new shelter-forests.

In addition, it is of tantamount importance for the province to increase water and soil conservation, and to keep the water sources clean, in order to allow the rest of the country to benefit from the two major rivers as they travel through the countryside. The goal of both the central and provincial governments in this endeavor is to build a more beautiful Qinghai by the mid-twenty-first century. This shift towards environmental sustainability will also provide an opportunity to boost the local economy, and thereby improve the economic and education levels of the people in Qinghai.

Qinghai's culture is heavily influenced by China and Tibet, given the close proximity as well as shared history with both places. Qinghai was also vital to such European eras as the Reformation, and the Renaissance as numerous Chinese inventions like the compass and the printing press all flowed through the Silk Road which was a vital lifeline for the local economy.

Qinghai's relative lack of disturbance throughout history has led to some truly breathtaking natural sights, including snow-covered mountains, icy peaks, deserts, vast pastures and sparkling lakes. The beautiful landscape is also home to flocks of rare birds and a variety of different animals, which makes for a unique and colorful viewing experience for potential tourists.

In addition to scenery and wildlife, many tourist attractions center on Xining, the provincial capital city of Qinghai. The city is home to numerous interesting sites, including the Great Mosque of Xining, and the North Mountain Temple.

Outside of Xining, there are two major tourist sites. The first is the Kumbum Monastery, which is one of the most important Yellow Hat Sect monasteries, and lies roughly 30 km outside of Xining. It also features the Hall of Yak Butter Sculptures. The second major site outside of Xining is Qinghai Lake. The lake is the largest saltwater lake in China, and is also located on the "Roof of the World," the Qinghai-Tibet plateau at an elevation of almost 3,600 m. The surrounding area is made up of rolling grasslands and populated by ethnic Tibetans. Most pre-arranged tours to this site stop at Bird Island, and another major event is the international bicycle race that takes place annually from Xining to Qinghai Lake.

The population of Qinghai is approximately 5.2 million, of which Han Chinese account for about 54.5 percent. In addition however, the province is inhabited by 55 ethnic groups, and the population of minority ethnic groups has reached 2.35 million, or 45.5 percent of the province’s total. Some of these other minority groups include the Tibetans who make up roughly 21.89 percent. the Hui who make up another 15.98 percent, the Tu who make up about 3.85 percent, the Salars who account for 1.85 percent, and the Mongols who account for 1.71 percent. The Salar and Tu ethnic groups are significant, because they are unique to Qinghai.

As one might guess from its poor economic standing, Qinghai's education system is fairly underdeveloped. According to statistics taken in 2000, there were only 8 institutions of higher education in the entire province, with 13,307 students enrolled and 2,107 teachers. The province also had 15 specialized secondary schools with 13,406 students and 1,363 teachers, 448 secondary schools with 224,660 students and 16,645 teachers, and 3,429 primary schools with 504,800 students and 27,706 teachers. The school-age child enrollment rate was 94.20 percent, and the number of college students per 10,000 persons was 25.69.

The Lanqing Railway, running between Lanzhou, Gansu and Xining, the province's capital, was completed in 1959 and is the major transportation route in and out of the province. A continuation of the line, the Qinghai-Tibet Railway through Golmud, has become one of the most ambitious projects in PRC history. It was completed in October 2005 and now links Tibet with the rest of China through Qinghai.

Xining Caojiabu Airport is the largest airport in the province, and has flights to Lanzhou, Golmud and Delingha, as well as flights to Urumqi, Lhasa, Xi’an, Guangzhou, Chengdu, Beijing and Shanghai.

Retrieved from https://www.newworldencyclopedia.org/p/index.php?title=Qinghai&oldid=1090784
Categories:
Hidden category:
This page was last edited on 7 December 2022, at 04:02.
Content is available under Creative Commons Attribution/Share-Alike License; additional terms may apply. See Terms of Use for details.