Yak is the common name for a stocky, ox-like bovine, Bos grunniens , of high altitude areas in Central Asia, characterized by long, upcurved, black horns and a long, shaggy outer coat of hair on the sides that reaches nearly to the ground. The wild population is small and restricted to parts of the Tibetan Plateau, generally ranging at altitudes over 3,200 meters (10,000 feet) above sea level. However, there is a much larger domesticated population that extends broadly in the highlands of Central Asia, including as far north as Mongolia. The scientific name Poephagus grunniens also is used, although this new name is not universally accepted.

A herd animal, the yak was domesticated over 4,000 years ago and are important to the society and economies of local people in the high elevation environments of Central Asia (Grzimek et al. 2004). The domesticated yaks provide food (meat, milk, cheese), leather, wool, and fuel (the dung), and are used as pack and draft animals. Wild yaks also are hunted for food and other products but such hunting, as well as competition with livestock grazing, has led to their populations being listed as "Vulnerable" (Hedges 2000; Massicot 2005; Grzimek et al. 2004).

Ecologically, wild yaks also are important as prey species for wolves and in nutrient recycling (Oliphant 2003).

As a bovid (family Bovidae) along with such mammals as antelopes, bisons, buffalo, cattle, sheep, and goats, yaks are even-toed ungulates that walk on the third and fourth toes of each foot, which are covered and protected by hoofs (specialized claws). All bovids are ruminants, which means that they have a four-chambered stomach that allows them to digest foods such as grasses that are too low in available nutriments for many other animals. Yaks belong to the subfamily Bovinae, which also includes such medium-sized to large ungulates as domestic cattle, bison, water buffalo, and the four-horned and spiral-horned antelopes.

Wild male yaks stand about 2 to 2.2 meters tall at the shoulder, the females about one third of that size, and domesticated yaks about 1.6 to 1.8 meters. Both types have an undercoat of dense, close-matted hair covered by long shaggy coat of hair. The guard hairs are short on the back, but on the sides can be up to 70 centimeters (27.5 inches) in length, extending down near the ground (Grzimek et al. 2004). They have a bushy tail.

Yaks are adapted to high altitudes, by having a thick coat of both dense, close, matted underhair and a shaggy outer coat, few sweat glands, large lung capacity, and blood cells about half the size of cattle and three times or more numerous and thus offering a greater capacity to carry oxygen (Massicot 2005; Wiener et al. 2003). Yaks secrete a special sticky substance in their sweat that helps keep their underhair matted and acts as extra insulation. This secretion is used in traditional Nepalese medicine. Conversely, yaks do not thrive at lower altitudes (ILRI).

In Tibetan, the word gyag refers only to the male of the species; a female is a dri or nak. In most languages which borrowed the word, including English, yak is usually used for both sexes. The latin name Bos grunniens comes from Latin bos, meaning "ox," and grunnio, meaning "I grunt," and reflecting the fact that yaks, unlike cattle, are not known to produce the characteristic bovine lowing or mooing sound (BBC 2003). Yaks are known in Tibetan as dzo or dzopkyo, and in Mongolian as khainag. 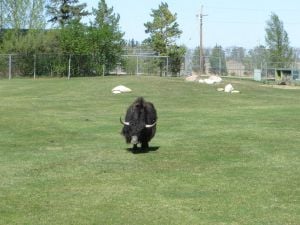 Yak at the Saskatoon Zoo.

Wild yaks once had a wide distribution that included the plateaus and mountains of western China, Nepal, northern India, and parts of Mongolia (Grzimek et al. 2004). However, today yaks are restricted to the Tibetan Plateau and adjacent highlands included within China's northern Xizang (Xinjiang) Province (Tibet) and western Qinghai Province (Grzimek et al. 2004), as well as the western edge of Gansu Province (Oliphant 2003), and with a few observed in the Chang Chenmo Valley of Ladakh in eastern Kashmir, India (Massicot 2005). They inhabit the almost uninhabited high elevation alpine steppes devoid of trees and bushes, ranging as high as the limit of vegetation at about 5,400 meters (18,000 feet) to as low as about 3,200 meters (10,500 feet) in elevation (Massicot 2005; Grzimek et al. 2004). The yak survives in temperatures that reach as low as -40°C (-40°F) with much of the precipitation falling as hail or snow, the lakes generally saline, and surface water scarce (Hedges 2000; Massicot 2005). The yak crunches snow or ice as a water source and grazes on the grasses, lichens, mosses, and other plants found at these high elevations (Massicot 2005).

They usually form groups of between 10 and 30 animals. These groups are segregated by sex, with larger female herds typically of 6 to 20 animals, but even up to 100 animals, consisting of adult females, calves, and juvenile females and males, and smaller all-male herds with generally two to five animals, but as large as 19; older bulls often are solitary (Grzimek et al. 2005).

Thubten Jigme Norbu, the elder brother of Tenzin Gyatso, the 14th Dalai Lama, reports on the yak from sightings during his journey from Kumbum in Amdo to Lhasa in 1950 (Norbu and Harrer 1986):

"Before long I was to see the vast herds of drongs with my own eyes. The sight of those beautiful and powerful beasts who from time immemorial have made their home on Tibet's high and barren plateaux never ceased to fascinate me. Somehow these shy creatures manage to sustain themselves on the stunted grass roots which is all that nature provides in those parts. And what a wonderful sight it is to see a great herd of them plunging head down in a wild gallop across the steppes. The earth shakes under their heels and a vast cloud of dust marks their passage. At nights they will protect themselves from the cold by huddling up together, with the calves in the centre. They will stand like this in a snow-storm, pressed so close together that the condensation from their breath rises into the air like a column of steam."

The once large populations of wild yaks, widely distributed in Central Asia, was estimated to be only about 15,000 animals in 1995 (Hodges 2000). They continue to face threats from commercial hunting for meat (despite being protected under Chinese law)—which is their most serious threat—and from interbreeding between wild and domestic yaks and diseases transmitted from domestic livestock to wild yaks, either directly or by means of other wild species (Hodges 2000). Many wild yaks are killed for food by the Tibetans. 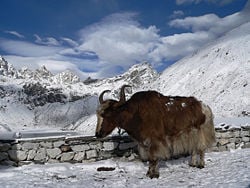 Yaks, which probably were domesticated by the first millennium B.C.E. (Massicot 2005), are kept throughout the mountains and high plateaus of Central Asia. There are estimated to be more than 12 million domestic yaks (Massicot 2005).

Domesticated yaks tend to be smaller than wild yaks and their pelage varies much more in color than wild yaks, with color from black to light yellow-brown, and with many domestic yaks with mottled white patches on their sides and backs (Grzimek et al. 2004).

Domestic yaks mate in about September; the females may first conceive at about three to four years of age, calving April to June about every other or every third year, apparently depending upon food supply. This gestation period is approximately 9 months. In the absence of more data, wild animals are assumed to mirror this reproductive behavior. Calves will be weaned at one year and become independent shortly thereafter. Yaks may live to somewhat more than 20 years.

Domesticated yaks are kept primarily for their milk, fiber, and meat, and as beasts of burden. Yak dung is even burned as fuel. Yaks are used to transport goods across mountain passes for local farmers and traders as well as for climbing and trekking expeditions. Often the pack animals are actually crossbreeds of the yak and Bos taurus (common domestic cattle). Domesticated yaks also are used to draw plows.

Yak milk is often processed to a cheese called chhurpi in Tibetan and Nepali languages, and byaslag in Mongolia. Butter made of Yaks' milk is an ingredient of the butter tea that Tibetans consume in large quantities, and is also used in lamps and made into butter sculptures used in religious festivities.

Yak fibers are soft and smooth and come in several colors, including shades of gray, brown, black, and white. They are about 1.2 inches long and are combed or shed from the yak and then dehaired. The result is a downy fiber that can be spun into yarn for knitting. The animals' hair is turned into ropes, rugs, and various other products. Their hide is used to make shoes and bags and in the construction of coracle-like boats.

In parts of Tibet, yak racing is considered a high source of entertainment at traditional Tibetan festivals. More recently, sports involving domesticated yaks, such as yak skiing, or yak polo, are being marketed as tourist attractions in Central Asian countries.