Xinjiang is an autonomous region of the People's Republic of China. It is a large, sparsely populated area which takes up about one sixth of the country's territory. Xinjiang borders three provinces of China including the Tibet Autonomous Region to the south and Qinghai and Gansu provinces to the southeast. In addition, it borders eight separate countries: Mongolia to the east, Russia to the north, and Kazakhstan, Kyrgyzstan, Tajikistan, Afghanistan, Pakistan, and India to the west. It administers most of Aksai Chin under the authority of the People's Republic of China, although the region is claimed by India as part of the state of Jammu and Kashmir. Xinjiang's central position in the region, and the active presence of Islamic faithful, make the province a pivotal region for peace and prosperity in the area.

"Xinjiang" or "Ice Jecen" in Manchu, literally means "New Frontier," a name given during the Manchu Qing Dynasty in China. It is home to a number of Turkic ethnic groups, the largest of which are the Uyghurs. The region is often referred to as Chinese Turkestan or East Turkestan, due to its ethnic links to Central Asia and specifically Turkestan. This strong linkage, combined with the high population of Uyghurs in the region has also led to a push for an independent Xinjiang, sometimes referred to as Uyghuristan by Uyghur activists.

Xinjiang has historically been an important area in Asia, due to its geographically significant location at the center of the continent. Throughout its history, a succession of conquerers and traders have passed through the area, many of whom challenged Chinese control of the region.

In 60 B.C.E., Xinjiang became part of China's territory when the central government of the Western Han Dynasty founded the West Region Frontier Command there. In 1884, the government of the Qing Dynasty officially established Xinjiang as a province. On October 1, 1955, it was declared the Xinjiang Uygur Autonomous Region by the People's Republic of China.

Once part of Western Regions, the area was later known as East Turkestan. As part of the People's Republic of China, the official name of the region today is the Xinjiang Uyghur Autonomous Region, although it is often called Xin for short. Among Uyghur activists who seek independence from China, the region is also referred to as Uyghuristan. 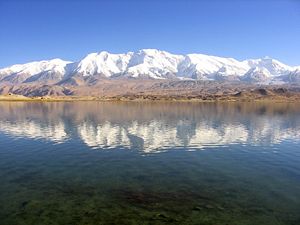 The geographic position of Xinjiang makes it a very important location strategically. In history, Xinjiang served as the key controlling section of the well-known Silk Road, while it is now a crucial segment of the railway leading to the second Eurasia Continental Bridge.

Xinjiang is the largest political subdivision of China, with an area of 1.66 million km². It accounts for more than one-sixth of China's total territory and a quarter of its total boundary length. It is divided into two parts by Mount Tianshan with the parts traditionally being referred to as North Xinjiang (north of the Tianshan mountains), and South Xinjiang (south of the Tianshan mountains). Dzungarian Basin lies to the north, and Tarim Basin lies to the south within this divide. In the center part of Tarim Basin stretches the Taklimakan Desert, the largest mobile desert in China and the second largest in the world. Xinjiang's lowest point is the Turfan Depression, which is 155 meters below sea level and also serves as the lowest point in all of China. Its highest peak, K2, stands on the border of Xinjiang and Kashmir, and at 8,611 meters above sea level, is the second highest mountain on earth.

Most of Xinjiang is young geologically, having been formed from the collision of the Indian plate with the Eurasian plate, forming the Tian Shan, Kunlun Shan, and Pamir mountain ranges. Consequently, Xinjiang is a major earthquake zone. Older geological formations occur principally in the far north, where the Junggar Block is geologically part of Kazakhstan, and in the east, which is part of the North China Craton.

The Eurasian pole of inaccessibility, the point on land farthest from any ocean, is located approximately 320 km (200 miles) from the city of Urumqi, within the boundary of Xinjiang. It is located at Lat. 46 degrees 16.8 minutes N, Long. 86 degrees 40.2 minutes E, in the Dzoosotoyn Elisen Desert, which is 1,645 miles (2648 km) from the nearest coastline (in straight-line distance).

The Tian Shan (Tengri Tagh in Uyghur meaning mountains of the spirits) mountain range marks the Xinjiang-Kyrgyzstan border at the Torugart Pass (3752 m). The famous Karakorum highway (KKH) known as the "highway in the clouds" links Islamabad, Pakistan with Kashgar over the Khunjerab Pass. to the Chinese, it is referred to as "Friendship Highway."

Water resources are rich in Xinjiang. There are over 570 big and small rivers, and the amount of water per capita is higher than the national average. Xinjiang is also extremely rich in biological resources, with about 3,000 types of higher plants, making up ten percent of the total in China.

Rivers and Lakes include:

Xinjiang is known for its fruits and produce, including grapes, melons, pears, cotton, wheat, silk, and walnuts. In addition, it has large deposits of gold, chromium, copper, nickel, rare metals, salts, and nonmetals for building. Xinjiang also has deposits of coal and oil, making it both an economically and strategically significant area for the People's Republic of China.

The Xinjiang Production and Construction Corps (XPCC) is an important part of Xinjiang's economy, with 174 regimental agricultural and stockbreeding farms operating under it.

Oil and gas extraction in the prefectures of Aksu and Karamay is booming, especially with the West-East Gas Pipeline connecting all the way to Shanghai on China's eastern coast. Along with this oil and gas boom, the predicted reserve of coal in Xinjiang is 2.19 trillion tons, accounting for 40 percent of the total of the entire country. This abundance of resources makes the province an incredibly important source of energy for China.

Xinjiang's exports amounted to 3.047 billion USD, while imports turned out to be 2.589 billion USD in 2004. Most of the overall import/export volume in Xinjiang was directed to and from Kazakhstan through Ala Pass. China's first border free trade zone (Horgos Free Trade Zone) was located at the Xinjiang-Kazakhstan border city of Horgos. Horgos is the largest land port in China's western region and has easy access to the Central Asian market. In March 2006, Xinjiang will also open its second border trade market to Kazakhstan, which will be called the Jeminay Border Trade Zone.

Xinjiang is home to 47 different ethnic groups, including several Muslim Turkic groups such as the Uyghurs and the Kazakhs. Uyghurs make up nearly half of the population, which makes Xinjiang very different demographically from other parts of mainland China, and has led to its official designation as an autonomous region for ethnic minorities. Along with the Uyghurs and Kazakhs, other minority ethnic groups in Xinjiang include Hui Chinese, the Kirgiz, the Mongols, the Russians, the Xibes, the Tajiks, the Uzbeks, the Tatars, the Daurs, and the Manchus.

The percentage of ethnic Han Chinese (the majority ethnic group of China) in Xinjiang has grown from 6 percent in 1949 to an official tally of over 40 percent at present. This figure does not include military personnel or their families, or the many unregistered migrant workers who have come into Xinjiang from other parts of the country. Much of this demographic transformation can be attributed to the Xinjiang Production and Construction Corps (XPCC), a semi-military organization of settlers that has built farms, towns, and cities over scattered parts of Xinjiang. The demographic shift is seen by Uyghur independence advocates as a threat to Uyghurs and other non-Han ethnicities in maintaining their distinct culture within Chinese society, similar to the case of Tibet. At the same time, the minorities of Xinjiang have been historically exempted from the One-Child Policy, and many Uyghurs have emigrated out of Xinjiang to other parts of China, causing the percentage of Uyghur people in the total population of China to increase steadily.

Excludes members of the People's Liberation Army in active service.
[2] 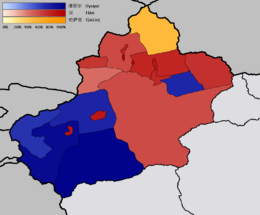 Map of Xinjiang indicating leading nationality in each prefecture-level division.

Some Uyghur scholars claim descent from both the Turkic Uyghurs and the pre-Turkic Tocharians (or Tokharians, whose language was Indo-European). Relatively fair-skin, hair, and eyes, as well as other so-called 'Caucasoid' physical traits are not uncommon among these individuals. However, generally Uyghurs usually resemble individuals from neighboring countries, including those from Afghanistan, Kyrgyzstan, Uzbekistan, Kazakhstan, and Pakistan.

[3]Does not include members of the People's Liberation Army in active service. 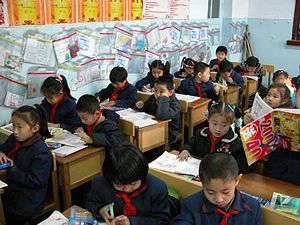 The focus of the literate population in Xinjiang has gradually transferred from education at the primary school level to that of junior and senior middle school. However, the percentage of the population with solely a primary school education still accounts for more than half of the total population. Although the number of intellectuals with a college and/or university education has been increasing very rapidly during recent years, the proportion of the group is still very small in terms of the total population. Compared with the provinces and autonomous regions with advanced economic development in China, there is still a noticeable gap.

Xinjiang's educational system is continuing to develop as the People's Republic of China invests more into its northwest region. Consequently, basic education levels are being improved within Xinjiang, and various adult education approaches are also being developed.

With a population of about 20 million and an officially estimated 60,000 infections, Xinjiang has one-tenth of China’s AIDS cases and the highest HIV infection rate in the country. Chinese authorities estimate that Kashgar prefecture, with a population of about three million, has 780 cases, but public health experts say the real figure is probably four times as much and rising fast.

Until recently, drug addicts were largely left as the responsibility of the police, who regarded them as simple criminals whose drug use was to be combatted mercilessly. Resistance to treating drug addiction as a public health concern has been high in Xinjiang, mirroring what some international health experts say was more generally, a slow response to HIV/AIDS in China[4] overall.

Professional sports teams in Xinjiang include: